Tuesday was a mostly uneventful day in Dubai with six of the seven first round matches being decided in straight sets and the two seeds in action, Angelique Kerber and Caroline Garcia, both prevailing. All eight second round matches are up on Wednesday so here’s a sweeping preview of the matches to watch out for. 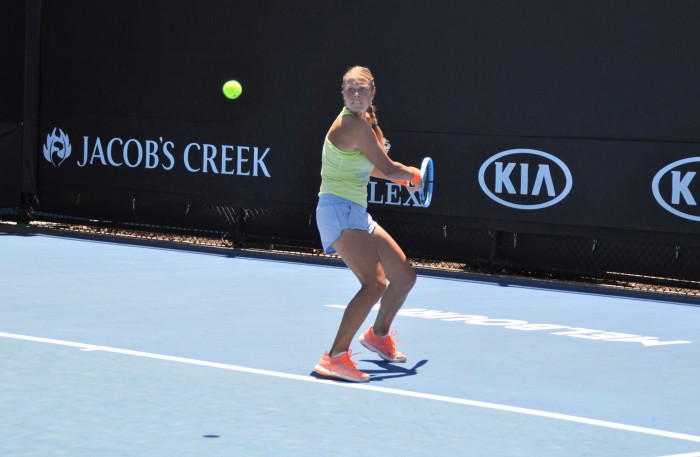 Match of the Day

Konta-Kasatkina caught my eye – biased as I like both players, especially Dasha! Konta has quietly had a decent start to the year, quickly putting a terrible end to 2017 behind her. I was impressed how she managed to fend off an ultra aggressive, Pavlyuchenkova in the first round and then take control when Pavs’s level dropped off. Konta won, 7-6(2) 6-2. Kasatkina scored a good first round win over Agnieszka Radwanska in straight sets, 7-5 6-4. The scoreline was perhaps more impressive than the actual performance. Radwanska struggled to impose herself on the match.

Konta beat Kasatkina in their only previous match in Sydney last year, 6-3 7-5. I feel Kasatkina is still lacking belief in her game and this match-up is one that suits Konta, in my opinion, with the bigger serve and weighty groundstrokes. Konta has found it tough going against players with variety so that may be a tactic for Kasatkina to mix up the play. I hope Dasha can get at least a set but in all honesty, I think Konta is the clear favourite to win this match.

One to watch on the outside courts

Anett Kontaveit vs. Naomi Osaka (1st up on Court 1 at 2pm local time)

Poor tennis balls… a big hitting clash between Kontaveit and Osaka is one match that i’ll be keen to track. I watched back Kontaveit’s three set win over Stosur on Tuesday. It took Kontaveit some time to figure out Stosur’s game and with yet another late wobble, she eventually got across the finish line. Osaka, who is now coached by Sascha Bajin, has made an encouraging start to the year. I’d just have a bit more faith in Osaka being clutch with Kontaveit’s nerves in closing out matches still an issue. I hope it’s something that Anett can overcome with more experience.

I’d tag Jelena Ostapenko’s opener against Elena Vesnina as an upset alert. I feel like it’s the sort of match-up where Ostapenko should roll if she is in form as Vesnina does seem to struggle against the big hitters, yet this is clearly not the case after an early exit to Mihaela Buzarnescu in Doha.

For a wild upset alert i’d give the nod to CiCi Bellis up against Garbiñe Muguruza in the final match of the day. Muguruza seemed to hurt her knee in the final of Doha on Sunday so there’s a question mark. Bellis comes in rejuvenated and confident from a quarter-final run in Doha, will have adjusted to the Dubai courts from her first round win over Mertens, and has already proven herself to be a gritty competitor who can cause trouble for the big hitters on tour.

Blast from the past

When Angelique Kerber and Sara Errani last played at the 2012 US Open they were both top ten players. Five years on and so much has changed for both! Kerber has recently regained her position in the top ten following a stunning start to 2018 that has seen her win 13 matches on the WTA tour and her only two losses come against the world’s top two. Errani is currently ranked at #143 in the world and is on the comeback after a two month ban for a failed drugs test (still befuddled by this one). The Italian player has already won four matches in Dubai and scored her first top 50 win since May 2017 after beating Lesia Tsurenko in the first round.

Errani has previously troubled Kerber and leads their head-to-head, 2-1. Errani’s consistency, touch and lack of pace has thwarted Kerber so this will be an intriguing match.