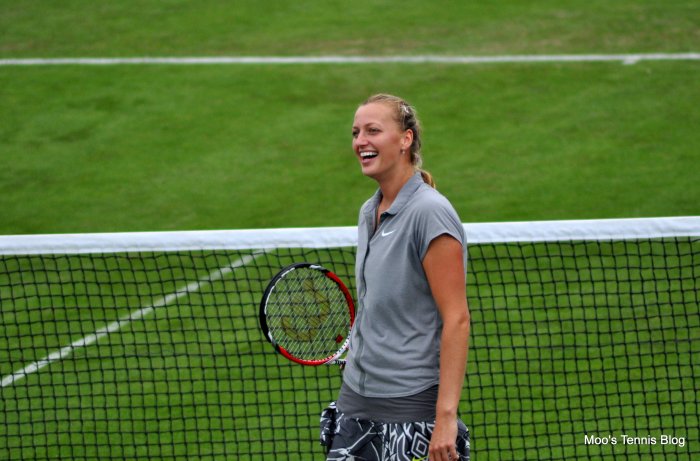 In the first main draw match on Center court of the 2017 Western & Southern Open, Petra Kvitova’s smile was beaming bright – any excuse to share my favourite Petra pic and i’m going to take it! Kvitova rallied from a set and a break down to beat, Anett Kontaveit, 1-6 7-6(2) 6-3 and book her spot in the second round of Cincy.

Kontaveit hadn’t played for three weeks after reaching the final of Gstaad on clay and she pulled out of Bastad the following week with a left thigh injury. This was Kontaveit’s first match on hard courts for four months, but you wouldn’t have guessed it from her start – the Estonian player came hurtling out of the blocks, running away with the set from 1-1 to win the last five games. Key to Kontaveit’s success in the first set was her serve as she scored 67% of first serves in and won 14 of 16 points behind it. Kontaveit managed to dictate the majority of the points and when Kvitova did seize control, she often made the error.

Kontaveit scored the first break of the second set at 2-2 and then consolidated to go up 4-2, saving a break point with some more decent serving. From here, Kvitova really tidied up her game – was it a coincidence that this came soon after a changeover chat with her coach, Jiri Vanek, and also, when the sun went in! We know that Kvitova is not a fan of heat and humidity due to her asthma. Kvitova broke back to 4-4 in the second set on arguably her best point of the match as she dictated Kontaveit and finished with a well-controlled drive volley winner.

.@Petra_Kvitova forces her way back into the second set with a brilliant volley! #CincyTennis pic.twitter.com/v1NYWMN6yv

While Kvitova’s level improved significantly, she managed to take advantage of Kontaveit’s decreasing first serve percentage and got more looks at the second serve, which she attacked. Kontaveit also began to spray a few shots, which was not happening in the first set. As first round matches go, this was a pretty decent watch and both played some good stuff in the second set. Kontaveit held on for the tiebreak, but couldn’t make a meaningful impact there. With better serving and increased patience in the rallies, Kvitova forced a third set. Even a bad volley miss up 5-0 wasn’t going to throw Kvitova off her rhythm – it was clearly the right move anyway!

The pair exchanged breaks at the start of the third set. Kontaveit battled hard to stay ahead on serve, saving a break point at both *1-1 and *2-2 – on the break point in the latter, Kvitova managed to get the return in play, but surprisingly went long. Third time around, Kvitova again was left to rue a missed opportunity on break point as she let a Kontaveit ball drop (willing it long!) instead of taking it out of the air, before sending a groundstroke long. However, this time Kvitova chalked up a second break point in the same game and Kontaveit double faulted.

Kvitova didn’t drop another game as she convincingly backed up the break with some excellent serving and broke again, seemingly unperturbed by another shocking miss at the net. Kvitova sealed the three set win in two hours and one minute.

The winners to unforced errors differential for each set was as follows:

Fans at @CincyTennis will get to see much more of @Petra_Kvitova , she’s through to R2 pic.twitter.com/va8Nn8qCXu

Kvitova’s been back for a while now, but i’m still having to pinch myself at what she has been able to achieve on the court so soon into her comeback. This was one of her most impressive wins to be able to halt the mounting momentum of a sharp, Kontaveit. Kvitova’s serve has been pretty consistent this year and key was that she won 83% of first serve points in the third set. I loved how patient and measured Kvitova was in the rallies in the second set after an error-strewn start. Dare I say there were a few flashes of Peak Petra in the the second half of the second set.

While Kontaveit is enjoying her best season on tour, this was another match against a top player where she started superbly, yet couldn’t maintain it for the two sets and get the win. Kontaveit could have landed more first serves towards the end of the second set, but I felt the change in momentum in this match was more down to Kvitova.

Losses to Garbiñe Muguruza (French Open) and Caroline Wozniacki (Wimbledon) for Kontaveit spring to mind and I wonder if they were in the back of her mind. Kontaveit has just lacked the killer edge in closing out matches against the best players. I’d hope with more experience, Kontaveit can keep building her confidence to go after her shots and overcome the nerves in the high pressure moments. Right now, I don’t seem much of a Plan B when Plan A isn’t working. Her game is dynamite when on though and I love her commitment, no matter what the scoreline is.

Kvitova was on a three match losing streak in Cincy and hadn’t won a match at this tournament since 2013.

Kvitova will play Lucie Safarova or Sloane Stephens in the second round. Petra has an impeccable 10-0 record against Safarova, while she just lost out in an three setter to Sloane Stephens in Toronto. The match will be played on Wednesday with Safarova-Stephens set for Tuesday’s schedule.