As an avid tennis fan and a student at Stanford University, the Bank of the West Classic is a dream come true. A rapid five-minute bike ride is all that separates my dormitory from one of the premier stops on the WTA tour. This year, I decided to compile some of my thoughts about the tournament, including some general information, highlights of specific matches, and my final thoughts. Thanks, James, for the opportunity!

Perhaps the best feature of the tournament is its inherent intimacy. There are only two match courts, but essentially any seat on either court affords great views of the players. The tournament has a variety of vendor tents that comprise the bulk of the tournament’s “alley,” which more often than not features a few tennis celebrities casually strolling! The players almost always stop for pictures whenever they can, including after their matches. Madison Keys actually stayed on court for a full ten minutes after her quarterfinal win over Lesia Tsurenko, and I managed to get a selfie with her! 🙂 Finally, the weather is perfect– it is California after all– and the player lineup is typically all-star. 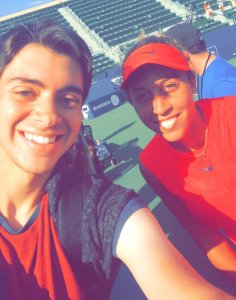 The small size of the tournament– it only features 28 singles players– can often allow for some exciting early matchups. This year, I was a little disappointed by Victoria Azarenka’s withdrawal; I had been dreaming of a potential first round match between her and Maria Sharapova! Nevertheless, there was definitely a lot of star power on display throughout the tournament in the form of Garbiñe Muguruza, Petra Kvitova, and Madison Keys. Unfortunately, Maria Sharapova withdrew with arm pain following her dramatic first round match; more on that below! However, I was still really thrilled with the 2017 lineup, especially given that last year’s draw was not nearly as deep.

The first match I saw at the tournament was the one that was by far the most anticipated by the tennis world, at least according to tennis twitter: Maria Sharapova’s return to tennis following her injury in Rome. This was also Sharapova’s first match in the United States since the Miami Open in 2015, which only added more excitement and suspense to the already amped atmosphere. She played Jennifer Brady, who made waves in the tennis world when she reached the fourth round at the Australian Open earlier this year.

This match was very well-attended, especially given the fact that it was a first round match! The crowd was definitely very animated, with some audience members actively cheering Sharapova on, while others were, well, not so kind. I think her situation is a delicate one, but I think most of us tennis fans are also rather tired of hearing about it; she’s one of the sport’s greatest champions, and without question brings a lot of attention and focus to women’s tennis. I attended all the other sessions at this year’s tournament, and I can say with a great degree of certainty that her match was the best attended and most vocal match, save for the final.

One of my favorite shots of the night: The intensity, the flying necklace.. Maria was on a mission on that 3rd set. pic.twitter.com/qwgF0N6ACH

Thoughts on some players:

Sharapova looked to be in good form, especially given her injury concerns. With her ever-competitive spirit prominently on display, she hit her groundstrokes with authority, and “served big,” despite a suspect number of double faults. Had she not withdrawn, I suspect she would have gone much further in the tournament.

Kvitova impressed me in her match against Kateryna Bondarenko, serving well and moving around the court excellently. However, she really struggled to find the court and hit her shots with her trademark power in her match against Cici Bellis. I think Kvitova will return to form soon, but I am just really happy to see her enjoying herself on court. She’s universally loved, as evidenced by her reception at the meet-the-player party.

Muguruza played dominant tennis throughout the tournament. Her match against Ana Konjuh in particular was a mesmerizing display of power tennis. Muguruza’s consistency– I can’t believe I used that word– was key to her game this week, and she is rightfully relishing in her Wimbledon victory. She was stopped only by a brilliant performance from Keys, but I expect big things from Muguruza later this year.

Tough evening in the office for Petra tonight.. pic.twitter.com/gEFRSL4AIH

Moving onto the Americans…

CiCi Bellis proved to me this week why she has received so much media hype. She lives in Atherton, which is about fifteen minutes from Stanford; unsurprisingly, she received immense support from the crowd throughout the week, especially during her commanding win over Kvitova. She is a fighter on court, and can penetrate the court with her groundstrokes much more than I initially thought. Her serve remains a liability, but there should be no reason why she can’t continue to advance up the rankings given how strong the rest of her game is. I look forward to seeing more of her in the future!

Vandeweghe shined this week, winning the doubles crown while losing to Keys in the singles final. CoCo impressed me with her consistency off the ground; the errors which defined her early career didn’t seem to make the journey to Stanford with her! She has been open about having a mental coach; even though she herself doesn’t quite believe in sports psychology, her demeanor this week was markedly more composed and focused. With regards to her game, it’s obvious how hard she hits the ball from watching her on TV, but seeing her live is a whole different ballgame. Vandeweghe’s first serve was consistently above 113 mph, and her groundstrokes were as ferocious as ever. She’s an imposing figure on court, and I was impressed with how confidently she carries herself, even if in doing so, she can come off as slightly arrogant.

Keys winning the singles title was the cherry on top of a wonderful week of tennis. She has not had it easy at all these past few months, as evidenced by two wrist surgeries and limited success on tour. Honestly, this title came out of nowhere, but it speaks volumes about her innate talent that she was able to win the tournament. Down a set and a break in her opening match, Keys stormed back, mixing up her serve expertly while bludgeoning her groundstrokes.

I was really worried when she retired from her doubles match, but I am happy that she was able to continue playing. Her demolition of Muguruza in the semis was “vintage Madison,” and reminded me that while she is streaky, she can beat anyone if she’s playing her best tennis. She is fierce on court, but one of the sweetest players on tour, as evidenced by her adorable reaction to winning when she sat on Coco’s lap. It was a lovely moment between two talented players who seem poised to carry the torch for American tennis.

This was definitely better than any forehand, backhand or posed trophy shot today… pic.twitter.com/opzhRF9GNW

Match of the Week: Nicole Gibbs vs. Claire Liu (First Round)

I was in the front row for this match, and I don’t think I’ve ever been more animated during a match, except for maybe the Venus/Konta final last year. Gibbs came back from 2-5 in the third set to win in a late-night, exhilarating tiebreaker, which had the Stanford crowd– rather, what was left of it– hollering and on its feet. Watch this match on replay, if you can! Nicole is also an excellent follow on social media.

Major win for @Gibbsyyyy tonight, she came back from a set deficit against Liu. pic.twitter.com/wnuCcDInIg

Overall, I had a phenomenal experience at the Bank of the West Classic. I watch as much tennis as humanly possible on TV, but nothing compares to seeing players compete live. The Bank of the West Classic tournament is, well, a classic on tour, and this year was no exception. I will say that I was rather surprised by the number of “blowout” matches this year; there were only four matches that went three sets! The quarterfinals and semifinals in particular were all completed rapidly, with Keys’ win over Muguruza happening in only 57 minutes!

However, the players who won easily deserved to win by virtue of their play, even if it meant less tennis for the fans. Furthermore, given how “seedings” have become seemingly less predictive of success at tournaments this year– epitomized by Jelena Ostapenko’s French Open victory– it was extremely surprising that for the first time since 2004, the top eight seeds all advanced to the quarterfinals of a WTA tournament. Could this be the advent of increased consistency on tour? My gut feeling says no, but I’d be interested to see what happens!

I hope to see Keys build on this performance, and I think that her victory will do wonders for her confidence. Unfortunately, she withdrew from Toronto, but I think that was the right call for her, given that she should prioritize her health in order to best prepare for New York. Meanwhile, Sharapova continues to struggle with injury, but I still think she will have one or two big results before the season ends. Interestingly, I have not heard much about Azarenka, but I am sure she will be back as soon as she feels she can compete and win.

While I am definitely experiencing major tennis withdrawal right now, I am really looking forward to the rest of the season! In particular, the current top 8 in the Road to Singapore have me extremely excited.

4 thoughts on “Guest Post: My week at the Bank of the West Classic, Stanford”