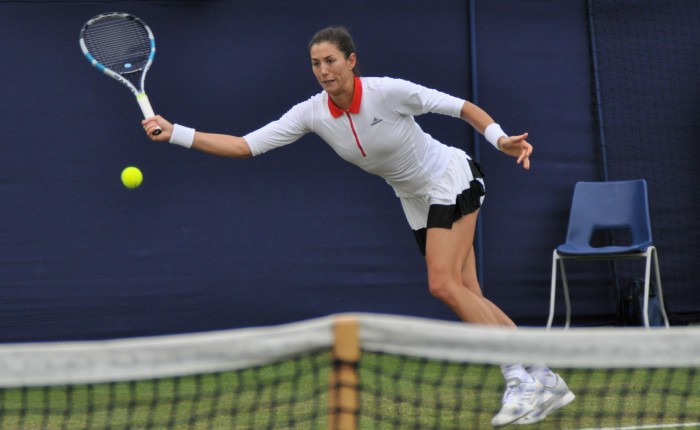 The final of the 2017 Wimbledon Championships will be contested on Saturday afternoon between the number 10 seed, Venus Williams and the number 14 seed, Garbiñe Muguruza after both players won straight set semi-finals on Thursday. Williams and Muguruza have both competed in a Wimbledon final before – Muguruza made it this far in 2015, while Williams is into her ninth, but her first since 2009.

The first of the semi-finals lasted 65 minutes as Muguruza produced a ruthless display of attacking tennis. This was Magdalena Rybarikova’s first ever Slam semi-final and sadly that showed. She struggled to get her feet moving at the start and didn’t look comfortable with her ball toss on serve. It’s totally understandable and shows the grandeur of playing a Wimbledon semi-final.

Muguruza was sporting heavy strapping on her thigh, but appeared OK in her movement. I thought both players looked nervous at the start but Muguruza kept things steady and was the more aggressive, making many ventures into the net with Rybarikova a tad defensive and reactive. Muguruza didn’t do anything special in the first set but her willingness to come forward was key – the Spaniard won 10 of 13 points up at the net.

The second set was a dazzling display from Muguruza and her stats were sensational – three points dropped behind her serve, nine out of 12 points won up at the net and 14 winners to just two unforced errors.

This was a great tournament for Rybarikova, who played so, so well to get this far and warranted her place in the last four. On the day, Muguruza’s experience and superior level prevailed.

In another clutch display, Venus Williams edged a tight and thrilling opening set, before easing through the second set to beat Johanna Konta. It was a quality first set and I was so impressed with how both players managed to get themselves out of trouble on serve – Konta was at 30-30 in her first four service games and won that point on all four occasions before eventually holding serve. Williams was three times down *15-30 and all three times delivered on serve to hold.

The key moment in this match came with Williams serving at *4-4. The American served a double fault, which you could see coming a mile off as she looked up at the sky, followed by a drive volley miss into the bottom of the net. Konta chalked up two break points at *15-40. Williams saved them both in style – the first with a serve out wide followed by a groundstroke winner, and the second was a 106mph (!) second serve ace. A tip of the cap to Venus for being so bold. Williams held serve at 4-4 and then broke to 15 to take the opener, 6-4. Konta lacked a little patience in that final game, going after the winner, yet Williams’s depth on her groundstrokes was superb

Williams went down *15-30 again on her serve at *1-1 in the second set, but once again held strong. Williams, who returned aggressively throughout, made the breakthrough in the next game after Konta had done well to save two break points. The Brit’s forehand broke down increasingly in the second set and she just couldn’t make a meaningful impact on return. Williams’s serve was once again, stunning, and she produced a handful of terrific body serves, one which nearly took out Konta! The serve was key in this match – Williams won 79% of first serve points (compared to 64% for Konta) and 65% of second serve points (compared to 33% for Konta).

Venus’s smile at the end was absolutely infectious and she’s into her second Slam final of the year!

Head-to-head record: Williams leads Muguruza, 3-1 in their head-to-head. The pair last played in Rome earlier this year where Muguruza won, on her favoured surface of clay, in Rome, 6-2 3-6 6-2.

Winners and unforced errors are remarkably similar – Williams has hit two more winners (143 to 141 for Muguruza) and Muguruza has hit one more unforced error (106 to 105 for Williams). The pair have been equally solid at saving break points. Williams has been broken just six times, while Muguruza has only lost her serve four times and three of those came in the Kerber match, which was the last time she was broken on serve.

Final thoughts: In terms of attention, Konta reaching the final would have great in terms of building interest in women’s tennis in this country (Konta-Halep was viewed by 7.4 million earlier in the week!). However, Williams-Muguruza was, in my opinion, the most exciting prospect of the four possible final line-ups.

There was uncertainty around both players heading into the tournament as Williams handled off-court issues and was tearful during her first press conference, while Muguruza’s final match before Wimbledon was a 1-6 0-6 thumping in Eastbourne by Barbora Strycova.

I think that Williams and Muguruza have been the two best players throughout the tournament by quite some distance, and it’s a fitting finale to what has been an exciting women’s tournament. Williams has most impressed me with her serve and ability to handle some of the heaviest hitters on tour with her wealth of experience, while Muguruza has found the balance between defence and attack, and shown an increased willingness to come forward to the net.

I think this could be a pretty damn great final. Williams obviously has the far greater experience, but Muguruza has been at this stage of the tournament before and is a Slam winner too so I wouldn’t anticipate her to be phased by the situation. Most impressively, both have been so mentally tough in the crux moments.

As to a winner, i’ll admit again that I am struggling to separate them because they have both played so, so well during this tournament. I am going to stick with Muguruza as champ. I was strangely high on Muguruza’s chances of a deep run pre-tournament and after watching her produce a superb display to beat Sorana Cirstea in the 3rd round last week, I sensed she was looking very dangerous in this draw. Her intensity and aggressive baseline play has been on it from the first round and her ability to stay positive in the key moments has been exceptional.

While I like both players, I will be rooting for Venus. She’s an absolute inspiration for what she continues to do on the court and it would be an incredible moment if she could win this title. I still feel what Venus has managed to achieve, over her entire career but most notably in the last few years, has been underrated and I can’t begin to describe the respect that I have for her.

Here’s hoping for a competitive final… can’t wait for this one!