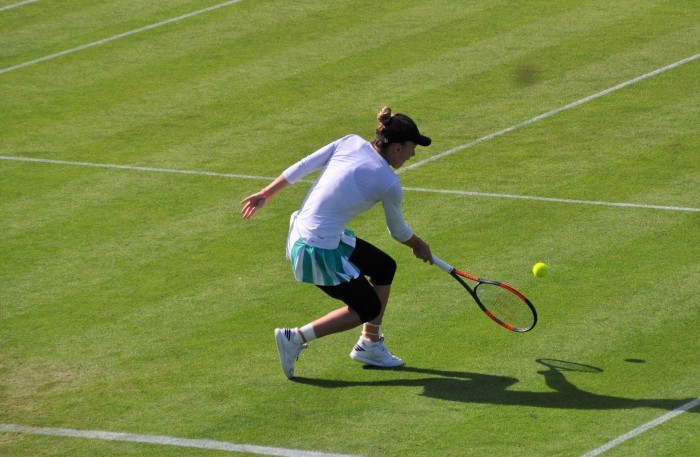 Blockbuster match-up alert… the world number two, Simona Halep plays Victoria Azarenka in the last 16 of Wimbledon on Magic Monday. The pair last met at the quarter-final stage of the 2015 US Open where Halep prevailed in a three set thriller for a monumental win.

In a great battle out on No.2 Court, Halep saw off a spirited effort from Peng Shuai in two tight sets. Peng had demonstrated some good form through Eastbourne and the first two rounds in Wimbledon so it was not a surprise to see her push Halep in what was the Romanian’s most challenging match of the week so far. Halep came from a break down to win the opening set, 6-4, but was unable to consolidate her lone break of serve midway through the second set.

In an exciting second set tiebreak, Halep saved a set point and then converted on her second match point to score an excellent win. Halep was a little passive on occasion and also lost a few points where she was in control and was unable to put Peng away when on the attack. There were two moments though for Halep that really impressed me – defending set point, Halep made a convincing move forward, hitting a volley winner. Secondly, on her first match point she challenged a groundstroke of Peng’s that she thought was out. Hawkeye showed it to be in. This could have been a huge turning point, but Halep responded with an ace and forceful return to wrap up the win. A very impressive mental effort from Halep.

For the second time this tournament, Azarenka came from a set down to beat the in-form, Watson. It was the Brit who made the much brighter start to the match – Watson was more effective on serve and stable in her groundstrokes with Azarenka committing a bundle of unforced errors. Watson served out the set, 6-3, with Azarenka netting a forehand on a long rally. Azarenka began to turn things around in the second set by getting forward and serving much better. Watson fell away as she kept lifting up on her increasingly error-prone forehand. The second set was closer than the scoreline suggested though with the last six games all going to deuce.

At the start of the third set, Watson was able to reset with a hold of serve from *0-30 down. Azarenka was trundling through her service games with ease and was able to force some pressure with Watson serving at 3-3, eventually securing the first break of the set. In a titanic six-deuce game, Watson had four game points with a few golden chances to stay in the lead – on one particular point, Watson hit a brilliant backhand into the corner but then sailed a forehand long when coming forward. Azarenka also hit a return that barely found the baseline. Azarenka was beginning to find her groove, dictating the points and looking more and more like she wasn’t going to miss.

The game at 3-3 felt pivotal but Watson broke back immediately to level up at 4-4. Azarenka mounted another challenge in Watson’s next service game and sealed another break of serve with a gorgeous lob and a forehand winner on break point. When serving for the match at *5-4, Azarenka showed some nerves, perhaps due to her lack of competitive matches. Her champion instincts still kicked in. Down *15-40, Watson was unable to take her chances with two missed returns. A decent serve from Azarenka and then a groundstroke long from Watson saw Azarenka claim a seventh consecutive win in this head-to-head as she progressed to the second week of Wimbledon for the fifth time in her career.

Head-to-head record: Azarenka leads Halep, 2-1 in their head-to-head. Of most interest is their last meeting in 2015 at the US Open where Halep won a cracking match, 6-3 4-6 6-4. In that particular encounter, Halep’s superior movement and bold shotmaking helped her to the win.

TBT to the end of the last Halep – Azarenka encounter. pic.twitter.com/UbnXGbmCBB

Interesting stats: Through their first three matches, Azarenka has won a higher percentage of points behind her first serve (75% to 66%) and Halep has been more successful behind her second serve (57% to 47%). Halep has landed a higher percentage of first serves in, 69% compared to Azarenka’s 62%. Azarenka has a slightly better winners to unforced error differential (+15 to +7) and unsurprisingly, has made many, many more ventures into the net and been successful 72% of the time. This will be a key stat for Azarenka in this match with Halep one of the best at picking a target and hitting passing shot winners.

Final thoughts: This will be one of the highlights on Magic Monday and very exciting since we have rarely seen this match-up. Many, including myself, questioned how Halep would react mentally after the loss to Jelena Ostapenko in the final of the French Open. Early signs are positive as she has clearly stated in recent interviews and press conferences about the pain of the loss, but learning from it to improve going forward. Halep took a wild card into Eastbourne, getting plenty of time on the grass in three lengthy three setters, and has improved match-by-match at Wimbledon.

This will be a firm test of Azarenka’s current level as she plays a top ten player for the first time since her return to the tour. The Belarusian’s spirit and adaptability, finding a Plan B when Plan A is not working, has already shone through in her first three rounds at Wimbledon.

In terms of picking a winner – in my opinion, Halep’s performance in the second set tiebreak vs. Peng, where she was bold in the pressure moments and reacted very positively to setbacks, has convinced me that she is playing with the confidence in her game to get past the challenge of Azarenka.