This post continues on from my first live Set Points post from Wednesday, which ended with seeing Naomi Osaka cause an upset by beating Barbora Strycova. After this match we headed straight for cover under Centre Court. At this time, Johanna Konta and Donna Vekic were playing out an epic and we could hear all the cheers. In the end, Konta won, 7-6(4) 4-6 10-8 in three hours and ten minutes. Love, love, loveddd the embrace at the end!

After a three-hour and 10 minute battle, an emotional embrace at the net for Johanna Konta and Donna Vekic…#Wimbledon pic.twitter.com/XWhbX3J1WB

A moment to remember.

After a quick breather, it was time for another wander. I managed to tick off three new players in quick succession with photos – Oceane Dodin, Kristyna Pliskova and Viktorija Golubic. Dodin was playing doubles with Tatjana Maria on Court 7 and they seemed to be having a great time together with plenty of laughs. Dodin and Maria beat Ashley Weinhold and Caitlin Whoriskey in the end, 6-3 6-2. 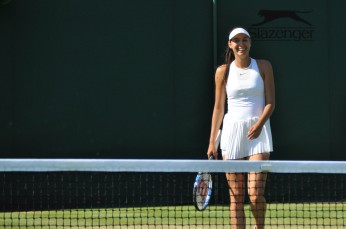 There was nothing outstanding going on on the outside courts and the sun was getting to me so we went back to our seats on Court No.3 for a time where they were slowly moving into shade. We watched the second set of Jerzy Janowicz vs. Lucas Pouille. It was a decent match with both carving out opportunities to break but the server always coming up with the goods.

It eventually went to another tiebreak where JJ was too good. Janowicz’s serve was breathtaking up close and so powerful. We were sat next to his team (who were sat in our seats!) and he kept turning around and staring at them intently. It was actually quite terrifying 😂. I like Pouille, who hit a couple of stunning volleys, but I didn’t think there was anything special about his game, especially on grass, and I wasn’t surprised to read later that Janowicz won, 7-6(4) 7-6(5) 3-6 6-1.

At the end of the second set, we headed over to Court 8 where Lucie Safarova and Bethanie Mattek-Sands, aka Team Bucie, were playing their first round doubles match against Alison Riske and Jennifer Brady. Lucie and Beth are not only going for the Team Bucie Slam in winning all four Slams, but they are also going for the Calendar Slam have won both the Australian Open and the French Open this year. The last time i’d seen Lucie and Beth on Court 8, they were on opposite sides of the net playing an absolutely brutal first round singles match last year. Lucie saved three match points to win and I got this shot of their hug at the net. 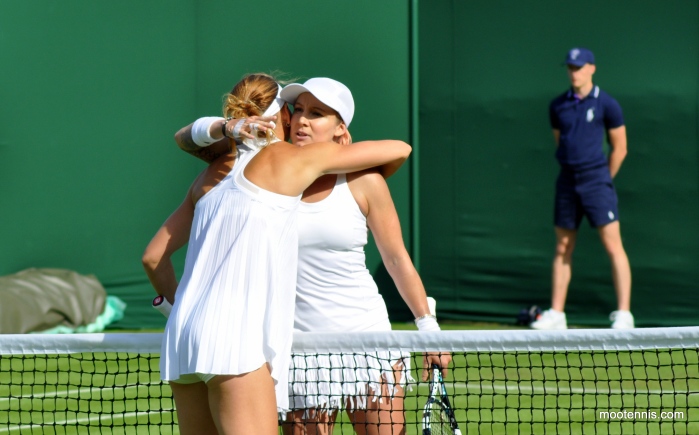 One year on and I was delighted to see them on the same side of the court! It was also the first time i’d ever seen them play together. I was sat on the side closest to Court 4 and adjacent to Court 3 and was behind their respective teams including Lucie’s friend and Czech table tennis player, Iveta Vacenovska.

As to be expected, it was a fun watch and there were plenty of laughs from both teams. Lucie and Beth have such great chemistry on court and their games work so well together. Alison kept laughing too, once when she got caught at the net.

I was so impressed with Lucie and i’m tentatively excited for the tournament ahead in both singles and doubles with how well she is playing. Her serve was on and I noted how much she has improved at the net. She hit many volley winners and looked so confident! I think the doubles with Beth over these few years has been great for her game. 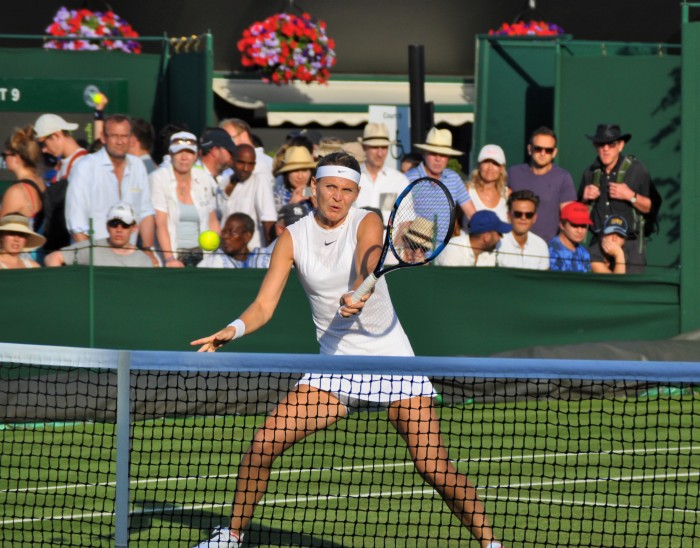 Beth’s serve was a little vulnerable towards the end, but she did come up with a couple of cracking shots – one got a big applause from Lucie. Her forehand return was lethal at times. I also loved their communication with Beth shouting at one point “got it” or words to that effect with such authority. I love how she owned it!

Lucie and Beth were tested but didn’t drop serve once and won, 7-5 6-2. After missing Lucie in Eastbourne, it was a real treat to get to see her at Wimbledon and with lots of smiles too. The pair shared a warm embrace and with Alison and Jennifer too at the net.

The light wasn’t great for photos where I was sat but I think the darkness kind of works in this one!

We finished our day on Court No.3 with Madison Keys vs. Camila Giorgi. Our seats were now in shade and it was very pleasant! We had a band of very passionate Giorgi fans next to us – i’m guessing they were friends of hers as they were sat in the competitor seats? They were shouting out after practically every point with “Forza, Cami”. They were mostly OK, but there were a few times when I felt they crossed the line. For example, one of them did talk in between Madison’s first and second serves when she was our end. 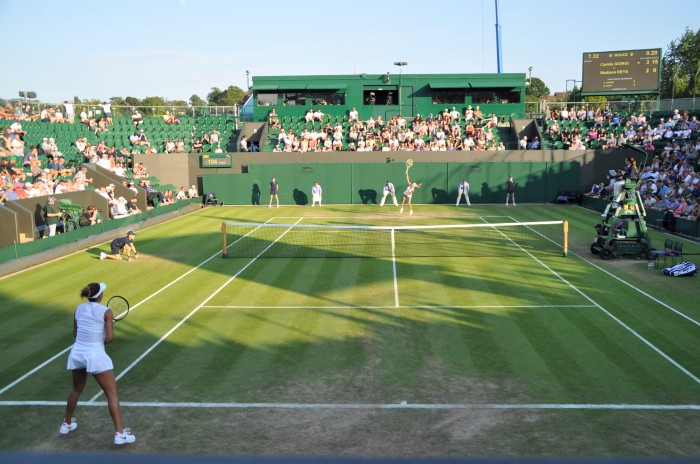 Giorgi was superb in the first set – she was dictating rallies and serving extremely well. Keys had one good service game but just couldn’t really string it together. The Italian player continued to dominate in the second set with an early break. Keys kept battling hard, but just couldn’t get that break.

As the set rolled on, Keys stayed in touch and finally was able to make a move on return although granted, it was mostly gifted to her as Giorgi’s once reliable serve suddenly began to leak double faults. We spotted Giorgi’s dad on the side of the court and he was losing his nut and spent a lot of time with his head in his hands. Keys was broken straight back as she looked rushed in her service game at 4-4. Giorgi was unable to serve out the match though at *5-4 and Keys had one of her most convincing holds in her next service game as the second set meandered to the tiebreak.

The second set tiebreak was chaos and I loved every second of it. My heart was beating so fast and I was cheering all the way for Madison! I love that feeling when you get totally absorbed in a match, so much so my memory of it even now is pretty poor 😂. Giorgi had four match points, of which Keys saved most of them with some bold play and excellent serving. There was one wild point where Giorgi fell over, but Keys hit it straight back to her. Keys was forced to come in with Giorgi’s next shot playing up short and the Italian player hitting a superb passing shot winner.

You won't see many winners like this after a fall! 🔥#Wimbledon    #giorgi pic.twitter.com/lN8LLchDfn

I was thrilled that Keys eventually won the tiebreak, 12 points to 10, although it was a real shame for it to end on a Giorgi double fault. Straight into a third set and it was Giorgi who ran away with it. Having played her best tennis of the match at the end of the second set, Keys lost her momentum with a spell of unforced errors.

The American battled to get back into contention but it was too late as Giorgi’s serve came back and her dynamic groundstrokes helped her through – Giorgi won, 6-4 6-7(10) 6-1, and plays Jelena Ostapenko in the third round which will be must watch! There was a smile from Camila up to her supporters, but she didn’t acknowledge them at all during the match. Someone in the crowd said to them “she seems to be ignoring you”!

A word for Madison – she didn’t play her best, but having looked doubtful for Wimbledon after having minor wrist surgery recently, I thought she did great. She battled so hard and her fighting spirit was really admirable. She looked gutted at the end, but I hope she can feel proud of her efforts. Fingers crossed she can go on for the rest of the year and play pain free.

What a day and a big thanks to the bro. I’m very irritating watching tennis so he’s a saint for putting up with me 😂. It was a lovely evening for tennis and I have so many new memories from Wimbledon to cherish 😊 .

Such a nice evening! One game away for Giorgi… pic.twitter.com/D3spbxDtQc