This post features two snap previews to cover the quarter-finals for the bottom half of the 2017 French Open draw. Wednesday’s quarter-finals will include Simona Halep vs. Elina Svitolina and Karolina Pliskova vs. Caroline Garcia. For a round-up of last 16 action on Monday, check out the latest Set Points post HERE. 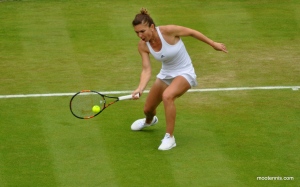 Matching their top eight seedings, Simona Halep and Elina Svitolina will reprise last month’s Rome final in a blockbuster quarter-final match-up. Improving match-by-match, Halep scored an emphatic 6-1 6-1 fourth round victory over Carla Suárez Navarro. It was a noteworthy win because Halep had never beaten the Spaniard before on clay. While both players had similar first serve percentages, Halep was much more successful behind it by winning 68% of first serve points.

In polar opposites, Svitolina had to battle hard from *2-5 *0-30 down in the third set to see off the qualifier, Petra Martic, 4-6 6-3 7-5. Svitolina was on the ropes but demonstrated champion-like qualities to prevail, taking advantage of tension from Martic’s side, but playing aggressively herself and hitting winners off the forehand wing.

Svitolina said 30 minutes before the match she stood up and felt a shooting pain up her back. Panicked. #RG17

Head-to-head record: Halep leads Svitolina in their head-to-head, 2-1. Of most importance was their Rome final last month where Svitolina won, 4-6 7-5 6-1. While Svitolina got the win, Halep had been dictating play before she hurt her ankle in the first set. The Romanian player admitted to not being able to give her all physically in the third set.

Final thoughts: Halep’s most impressive asset during this superb clay court season has been her mental resilience. The ankle has been baring up and her level has been improving with each match in Paris. Svitolina too has been mentally sound and is showcasing her rising confidence level by toughing out wins when not playing at her best.

The Rome final wasn’t a great match, in my opinion, because of their respective injuries so I hope this won’t be the same on Wednesday because they’ll both need to do plenty of running! I’d go for Halep to prevail, particularly after what happened in Rome – I think the Romanian player is more decisive in attack and the more natural mover on the clay. 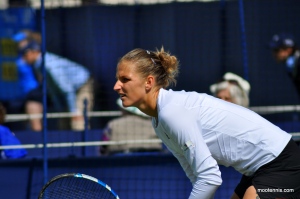 Karolina Pliskova and Caroline Garcia will square off in their first quarter-finals at Roland Garros. Garcia has well and truly broken new ground having never previously made it past the third round of a Slam. In an all-French fourth round encounter, Garcia beat Alizé Cornet, 6-2 6-4, just about holding her nerve at the end. Garcia was most impressive in chasing down Cornet’s drop shots and then being able to hit winners when up at the net. Her serve was decent and the groundstrokes were mostly secure.

Things got a little dicey for Garcia at the end – she served up two double faults when serving for the match at *5-3, the second one on break point in rather spectacular fashion. However, in what was a painful end to the match, Cornet hit two double faults of her own with Garcia breaking for the win. The nerves were understandable but Garcia got returns back in court – it seems straightforward, but that hasn’t always been the case for the Frenchwoman!

Pliskova hasn’t found her A-game in Paris but she hasn’t needed to, coming up trumps mentally and continuing to tough out matches. A quarter-final showing, even if the draw has been kind to her, is a superb achievement on her least favourite surface. From a set down, Pliskova beat Veronica Cepede Royg, 2-6 6-3 6-4. There really wasn’t much between the pair in the decider – Pliskova won the key points including saving a break point at *3-4.

The reaction says it all…@CaroGarcia is moving on at #RG17 pic.twitter.com/t7gVH5Ntqs

Head-to-head record: Pliskova and Garcia are tied at 2-2 in their head-to-head with three of their four encounters going three sets. Garcia played a great match in the Fed Cup final last year, while Pliskova won their most recent match-up in Doha earlier this year, 7-5 6-4.

Final thoughts: I think that Garcia is playing the better tennis right now and is more comfortable on the clay – the big question is whether she can outlast Pliskova mentally who has been scrapping so well this tournament. Garcia has struggled in front of home crowds at Roland Garros but so far, she has managed to handle her nerves and the occasion. I’ll take a risk and go for Garcia – i’m always wary of her nerves but I think her game matches up well against Pliskova.