This post discusses the players that I believe have the strongest chance of winning the 2017 French Open, considering factors including recent form on clay, previous French Open performance, their projected draw and their potential to cope with the physical and mental challenges that a Grand Slam provides. This doesn’t necessarily mean that they are almost certainly going to reach the latter stages, but are the only players I can picture winning the whole tournament.

This post was written by Vithun Illankovan – for more updates and information on any future posts, check out Vithun’s Twitter page @VitIllankovan. 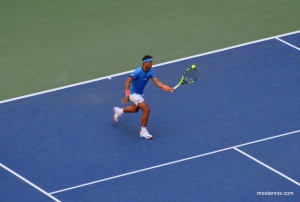 Nadal is the strong favourite to claim his 10th French Open title with only one loss on clay this season to Dominic Thiem in Rome. This was not a particularly concerning loss, considering he was on a 17 match winning streak. Whilst he has not looked completely invincible on clay this season, he is definitely playing at a level high enough to win at a tournament where he has only lost two matches.

On the whole, the last 12 months have been one of the most disappointing periods in Djokovic’s career in recent memory. Having finally won the French Open after trying for so many years, it appears as he has struggled to find motivation required to win consistently on the tour. I was pleased that he parted ways with his entire coaching team as what he describes as “shock therapy” as I am a strong believer that when something is not working you should make a change instead of waiting for things to work out.

His results have since improved with a Semi-final in Madrid, and going one better with a Final showing in Rome – could he go one better again by winning in Paris? Appointing Andre Agassi as his coach will not have dented his chances, as he will provide an added intimidation factor that Djokovic has lost over the last year. One thing is for certain; you can never rule out a defending champion, particularly one who has won 12 Grand Slams.

Wawrinka is a different player in the Grand Slams and ATP World Tour Finals, and is a different player to how he is for the rest of the season. It seems that these are the only events he can get 100% motivated for, as they are what your legacy is largely defined on. Having said this, I do not recall him entering a slam in recent years with such poor form. In addition after winning the 2014 Australian Open, his next two performances there were a Semi-final and 4th Round exit. He also reached the Semi-final at last year’s French Open when he was the defending champion so could a 4th Round exit be on the cards this year?

There is a large chance of this as his projected opponent in the last 16 is the hugely talented but unpredictable Gael Monfils, who is due a big result after a slow start to the year and will be playing in his home country. However, if he can get through or avoid this match, Wawrinka is certainly a contender to win the tournament, having landed in the top half of a relatively bottom-heavy draw and having the ability to beat anyone (on clay and hard courts) on his day.

My draw predictions from the Quarter-finals onwards are as follows (with seedings in brackets). 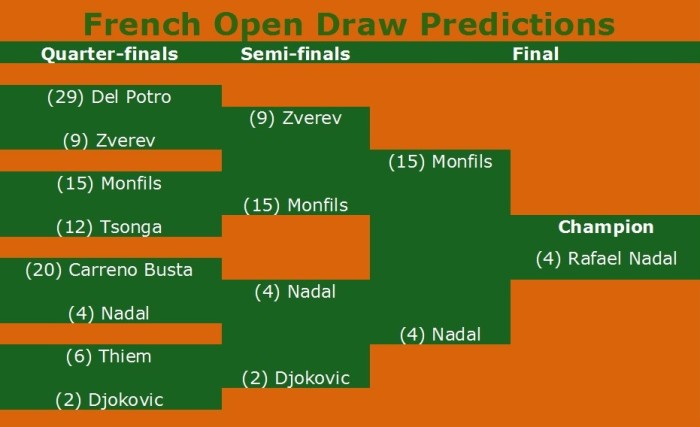 In terms of early exits, the big thing to notice is the absence of Andy Murray in the latter stages, who I believe will fall in the 3rd Round to Del Potro. Murray has been struggling with shingles in 2017 and only has a 4-4 record on clay this season. I also predict that Wawrinka will lose in the 4th Round to either Monfils or Gasquet with a rowdy Parisian crowd behind them.

For those wondering why I did not list Thiem and Zverev as championship contenders, my reasons are as follows. Thiem has had a superb clay season, being the only one to defeat Nadal this year but he may have to beat Goffin, Djokovic and Nadal just to make the final, all players he has negative head-to-head records against. Even if he miraculously managed this, I believe he would lose in the final as he still does not seem able to back up a huge win, as seen in Rome when he lost to Djokovic in 59 minutes after beating Nadal the round before.

Zverev has done very well to break into the Top 10 and win his first Masters title in Rome, but is still quite a streaky player losing to Chung and Cuevas on clay this year, players that he is expected to beat. In addition, he has yet to reach the 2nd week of a Grand Slam and there is no active player who has won a Grand Slam without previously reaching the 4th Round before.

The draw seems set up for a surprise finalist that not many people were predicting at the start of the tournament and my gut feeling is that it will be between Monfils and Tsonga, two entertaining Frenchmen near the end of their careers. I have gone with Monfils who is more adept on clay and by far plays his best tennis in France, where he has won half of his tournaments. This may be controversial as Monfils only has an 8-6 record this year, but he is a player that can suddenly find a rich vein of form.

It is extremely difficult to pick anyone except Nadal, who has enjoyed his best clay season since 2013 (and has an astonishing 72-2 record at this tournament) to win his 10th French Open title.