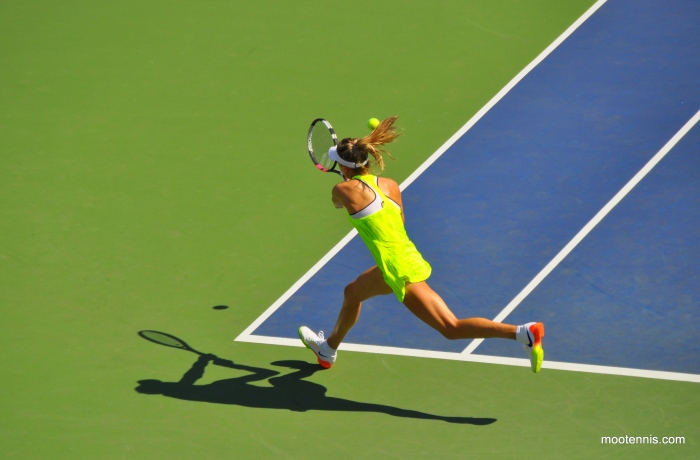 You couldn’t have written the script any better… ten days after Eugenie Bouchard came out with some of the harshest comments about Maria Sharapova including calling her a “cheater”, the pair will meet in an absolutely mouthwatering second round clash in Madrid at not before 8pm local time on Monday.

While the match-up had been heavily anticipated, it didn’t look all that likely on paper. Bouchard had been in terrible form since the Australian Open, while Sharapova faced a brutal first round match-up against the in-form, Mirjana Lucic-Baroni.

Bouchard scored a really encouraging first round win over Alizé Cornet, 6-4 4-6 6-1. The Canadian player talked in press about dipping back onto the ITF circuit, which she called as ‘punishment’ – more can be found in an article written by Courtney Nguyen for the WTA HERE. I can’t say I was that impressed with Bouchard’s comments about Sharapova in the sense that she should be focusing on herself, but she does always come across as very honest in press about her own game.

Sharapova also came through in three sets, showcasing some of her trademark grit and determination to see off an at times lethal, Lucic-Baroni, 4-6 6-4 6-0. The Croatian player was dictating rallies in the first set and battering returns, as she has done all year. Sharapova improved on serve in the second set and fought off a spirited late comeback from Lucic-Baroni, eventually breaking for the second set including a pair of return winners.

Head-to-head record: Sharapova leads Bouchard, 4-0 in their head-to-head. Their most recent match was at the Australian Open where Sharapova won, 6-3 6-2 in the quarter-finals. The pair have played twice before on the clay with Bouchard’s only set in this match-up coming in a stirring semi-final match at the 2015 French Open which Sharapova won, 4-6 7-5 6-2.

Final thoughts: I’m just here for the handshake… it will probably be a letdown but i’m still super excited about watching this one! I think it’s obvious that both players are going to be so motivated to win, Bouchard perhaps more outwardly after her recent comments. Playing Lucic-Baroni was the perfect warm-up for Sharapova as Bouchard plays an equally aggressive game. While she is still so soon into her comeback, there have been some positive signs from Sharapova and I feel that she does everything a little bit better than Bouchard, who has shown rare glimpses of quality but an overall lack of consistency during the year.

Hope it lives up to expectation, i’m a neutral for this one!