The next week promises to be one of the most intriguing on the WTA tour in 2017 as eight of the world’s top ten descend on Stuttgart at the Porsche Tennis Grand Prix. The tournament will also see the return of Maria Sharapova – the Russian player will compete in her first match on Wednesday following 15 months out due to a drugs ban. As many players arrive from Fed Cup action, expect a staggered start in Stuttgart. Let’s take a look at the draw… 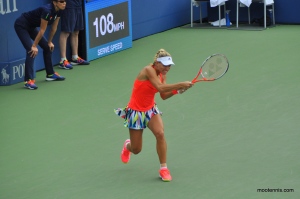 Angelique Kerber headlines the Stuttgart draw where she is currently riding a nine match winning streak having won the last two installments of this tournament. In Fed Cup action at the weekend, Kerber went 1-1 in Stuttgart with a straight sets win over Lesia Tsurenko on Saturday, but a fourth consecutive loss to Elina Svitolina on Sunday (on a side note, i’m baffled that Svitolina is playing Istanbul and not Stuttgart!).

Kerber’s first match in Stuttgart will be a tricky one against either Kristina Mladenovic or Mirjana Lucic-Baroni; both have displayed excellent form in 2017 with five top ten wins between them this year. Lucic-Baroni leads Mladenovic, 3-0 in their head-to-head – all three previous matches took place in 2016 and on clay. Lucic-Baroni won their last two in straights but their first ever encounter in Charleston was a see-sawing humdinger where MLB saved four match points to win, 4-6 6-4 7-6(13). Lucic-Baroni said in Charleston that she grew up on clay and likes the surface, and her confidence appears sky high following a successful tournament in Charleston. Mladenovic will arrive from Fed Cup duty where she dropped just three games (!) in two comprehensive wins over Silvia Soler-Espinosa and Sara Sorribes Tormo.

Another fascinating match from this quarter will be between fellow compatriots – Indian Wells champ, Elena Vesnina will take on Charleston champ, Daria Kasatkina. Vesnina and Kasatkina will be playing against each other for the first time on the WTA tour with Vesnina searching for a first win on the WTA tour since her triumph in the desert. Also in this section of the draw is Carla Suárez Navarro who was plagued by a shoulder injury for the first two months of the year and after early losses in both IW and Miami, finally began to show an upturn in form in Monterrey when she reached the semi-finals. 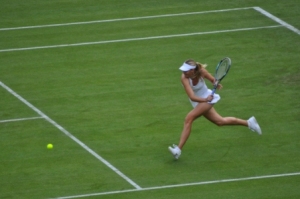 Garbiñe Muguruza now headlines a juicy second quarter (we’ll get there!) and will play Ana Konjuh or Anett Kontaveit in the second round. Muguruza has taken Cibulkova’s place in the draw after she was forced to withdraw with a wrist injury. Muguruza has had a peculiar year – she’s been competing well on court, winning seven of eight three setters played, but she’s retired hurt or ill in half of the tournaments that she has played this year and skipped Fed Cup this weekend due to injury.

The big talking point of the draw is without doubt, Maria Sharapova – love her or loathe her, Wednesday night will be a moment not to be missed. Sharapova’s first match will be against Roberta Vinci. The Italian will like the faster surface but i’ve never felt clay is her best surface. Furthermore, Vinci has lost her last three matches on tour and Sharapova has won their two previous encounters for the loss of just four games. I think this is a good match-up on paper for Sharapova, yet trying to predict how she’ll get on this week is almost futile. There’s a case that the break from the tour will have given her time to heal niggly injuries that had plagued her a year ago; on the other hand, a lack of competitive matches cannot be ignored. It’s going to be fascinating to see how this week unfolds…

And if that’s not enough, there is the potential for a Sharapova-Radwanska second rounder. In light of recent comments made by Radwanska and Sharapova’s agent, Max Eisenbud, this would be, from a neutral standpoint, a rather delicious slice of WTA drama. Radwanska will first have to get past Ekaterina Makarova – Radwanska leads their head-to-head, 6-2, but hasn’t looked comfortable on the court this year and was overpowered in her most recent match, a 0-6 3-6 thumping to Mirjana Lucic-Baroni in Miami. This isn’t a particularly promising time for Radwanska heading into what has famously been her weakest stretch of the calendar.

Agnieszka Radwanska tells Polish press that she thinks Maria Sharapova should not get wild cards for Slams: https://t.co/4cIhIFpu3x pic.twitter.com/QNICVJWJD2

With her return days away, Sharapova's agent Max Eisenbud decided to break his silence after these comments from Radwanska. Here he goes: pic.twitter.com/WXUVxooeK5 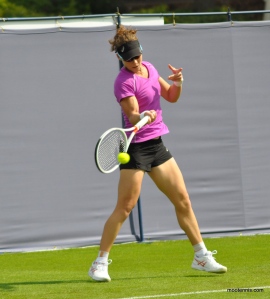 While Simona Halep and Johanna Konta (with a late wild card) are the two seeds in the third quarter of the draw, Sam Stosur will be one to watch based on how well her game transitions to the clay. The Aussie had a tremendous clay court season in 2016, rounding off with a glittering crescendo of a semi-final showing at Roland Garros. Stosur opens in Stuttgart against Anastasija Sevastova, who she defeated in straight sets earlier this year in Doha in one of the better matches she has played so far this year.

Halep’s first match of the week will be against Barbora Strycova or a qualifier. 2017 has been remarkably similar to 2016 for the Romanian player with a injury-affected first few months. She began to build some momentum in Miami, despite failing to serve out the win over Konta in the quarter-finals of Miami. Halep scored a superb 6-1 6-3 win over Konta in Fed Cup action this weekend (drama, drama, drama) in a performance where she stayed aggressive, even when Konta began playing more consistently in the second set. The Brit, Konta will take on the qualifier, Naomi Osaka in another fun first rounder. Osaka saved five match points in her second round qualifying win over Anna Zaja. 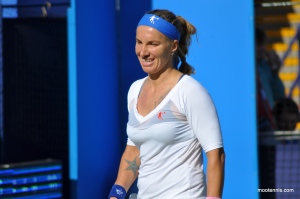 The fourth and final quarter is rounded out by the number two seed and this year’s most consistent performer, Karolina Pliskova. The Czech player could face CoCo Vandeweghe in her first match – Vandeweghe has won their last two matches, notably serving her way out of trouble in their most recent match in Dubai last year. The American has stumbled since her breakthrough semi-final run at the Australian Open earlier this year but seems to be clawing her way back into form with two straight set wins in Fed Cup this weekend. Vandeweghe plays qualifier, Jelena Ostapenko in a feisty first rounder that promises to be rather glorious.

The other seed in this section is Svetlana Kuznetsova who looks set for a fruitful clay court season. The Russian player has quietly built a consistent year and clay is arguably her best surface. Kuznetsova will first have to overturn a negative head-to-head against Kiki Bertens in the first round.

The winner of Kuznetsova-Bertens will play Zhang Shuai or Laura Siegemund in the second round. Zhang and Siegemund played out a superb match of high quality tennis in Brisbane earlier this year, which Zhang Shuai won, 4-6 7-6(3) 6-3. Siegemund, last year’s finalist in Stuttgart and recently buoyed by a run to the semi-finals in Charleston, could be a dark horse in this draw.

As mentioned above, Kerber has a great record in Stuttgart and hasn’t lost since 2014 when she fell to Carla Suárez Navarro. Dominika Cibulkova will be looking for her first ever win in Stuttgart having lost her last three matches at this tournament, the most recent of those in 2012. Of the eight seeds, Kuznetsova is the only other former champion in the first edition of this tournament on clay. Sharapova has a stunning record in Stuttgart with her only ever loss coming to Kerber in one of my favourite matches from 2015.

Predictions this week are going to be a hoot… from the bottom half, I like Halep and Kuznetsova. Halep looked sharp in Fed Cup action and with a bye, she’ll have some time to adjust to the courts in Stuttgart and get over a mentally draining tie against GB.  Halep is my champ.

Top half… not a clue! I fancy Sharapova to win a few rounds. On paper, I still see her beating everyone in the draw but I also think that if she were to progress through a few rounds, she would run into some physical and mental obstacles having been out for so long. Kerber’s first match is going to be a tricky one and i’m still undecided as to whether she can maintain her excellent form in Stuttgart. I’m not convinced by Muguruza, particularly with her recent injuries. I could see a surprise finalist, such as Lucic-Baroni or Konjuh, but i’m still deliberating!

Who do you think will win Stuttgart? Have your say in the tournament poll above and as always, comments are appreciated!