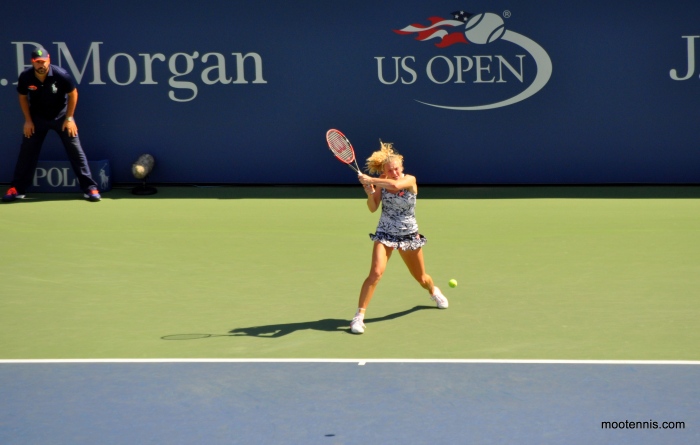 The number 13 seed, Caroline Wozniacki will play Katerina Siniakova for a place in the fourth round of Indian Wells when the pair take to the court on Monday.

Wozniacki was rarely troubled in her first match at Indian Wells, needing 76 minutes to see off Linette. It was a classic Wozniacki display – she didn’t do anything remarkable but didn’t need to, keeping things rock solid from her side of the court and benefiting from loose errors by Linette.

Wozniacki has been brilliant since last year’s US Open and is looking more and more secure, now seemingly fully fit and healthy. There was a time last year where Wozniacki never looked safe with a lead and front-running matches – with more and more match wins, the confidence is coming back.

For a set and a half, Siniakova was channeling her Shenzhen form when she beat Simona Halep and Johanna Konta back-to-back, en route to winning her first WTA title. However, things got noticeably tense and shaky at the end as she closed in on the win.

Siniakova played a clutch first set, saving three break points at 2-2 and then breaking immediately, before comfortably serving out the first set to 30. The 20-year-old continued to dominate on serve in the second set and produced some delicate drop shots, which were mostly successful. From *4-3 up, Siniakova suddenly tensed up and was broken to love. This set off a chain of four straight breaks – Siniakova missed two match points at *5-4 *40-15, and was broken, clearly emotional with a frenzied shouting episode. This rolled into the next game for the first few points but Siniakova recomposed with two fabulous winners.

Siniakova broke and then served for the match again at *6-5 – this time round, she looked calm as she raced into a *40-0 lead. The nerves resurfaced as she wasted match points #3 and #4. Finally, the Czech player sealed the win on a fifth match point in a tense, moonball rally.

Despite the wobble, Siniakova did well to not let this snowball and bag the win in straights. This win portrayed everything about Siniakova – decent serve, decent groundstrokes but still a shaky temperament that can be her undoing.

A happy Katerina Siniakova after her match today.
She's through to week 2 here in the desert, 🎾🌴🌵 pic.twitter.com/ZNKYt16ZNa

Head-to-head record: The pair have played just once before on the WTA tour with Wozniacki winning, 6-4 6-4 in Wuhan last year.

Interesting stat: Since the start of last year’s US Open, Wozniacki has won 37 of her last 45 matches including two titles in Tokyo and Hong Kong in 2016, and two finals in Doha and Dubai last month.

Final thoughts: Siniakova’s win over Suárez Navarro will have done her confidence the world of good as the Czech player has struggled for victories on tour since winning the title in Shenzhen so emphatically in the first week of the year. There’s a lot to like about Siniakova’s game and she’s a ferocious competitor. However, the emotions can boil over and nerves when closing out matches are still a factor. Siniakova will need to keep her emotions in check to stand a chance against an increasingly steady and confident, Wozniacki who has a great record in Indian Wells where the conditions suit her game.