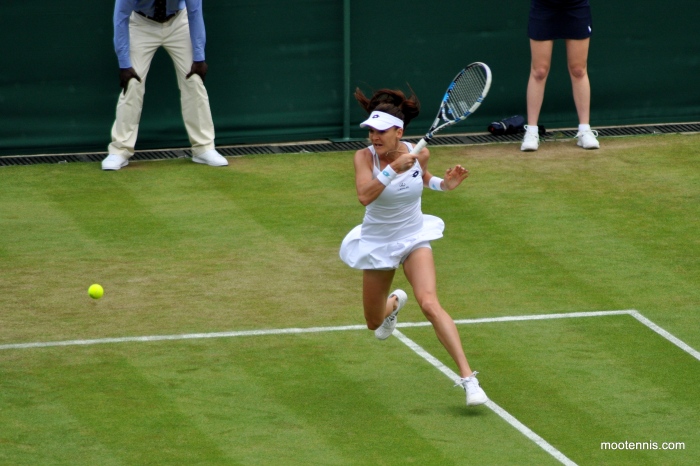 A rematch of the New Haven final will be the second of the semi-finals at the China Open in Beijing with the number three seed, Agnieszka Radwanska taking on the number 16 seed, Elina Svitolina.

Radwanska produced an efficient display to beat Yaroslava Shvedova, 6-1 6-2 in the last of the quarter-finals on Friday. It was a scratchy start from both players – Radwanska was swiftly broken in the first game of the match but Shvedova handed it back on a plate with a trio of double faults. You can’t blame the players though as this match started after 11pm. Spare a thought for Shvedova who was playing her second match of the day having beaten Alizé Cornet in the morning – no-one should have to play two matches in one day, let alone at such an hour.

Radwanska played an average match at best but that made this win almost more rewarding as she navigated through in just 73 minutes with little fuss. Shvedova contributed 30 unforced errors and won just eight out of 20 points at the net – Radwanska was electric with her passes and lobs.

Svitolina backed up her triumph over world number one, Angelique Kerber with an equally impressive win over Daria Gavrilova in the quarter-finals, 7-6(3) 6-1. I watched the first set during my lunch break and it was thoroughly entertaining. Based on ranking it looked like a match that Svitolina should be clear favourite for but Gavrilova had won all three of their 2016 encounters in straight sets. Gavrilova began with an air of confidence, leading early at 3-1, but an aggressive Svitolina reeled off a string of superb games to bring up an opportunity to serve for the first set at *5-3.

Gavrilova, who had sunk in a shell a little, came to the fore again to break back. The head-to-head record seemed to linger for Svitolina who missed six set points as the set meandered into the tiebreak. Gavrilova saved two set points serving at *4-5 with Svitolina going wide on both occasions and then another four serving at *5-6 and from *0-40. Gavrilova produced some really gutsy tennis and turned defence into attack on one particular point, scrapping to stay alive before unleashing a gorgeous cross-court forehand winner. Gavrilova held for a tiebreak when Svitolina produced a costly miss at the net.

Gavrilova had all the momentum at the start of the tiebreak but that soon swung around when the line judge incorrectly called one of Gavrilova’s shots on the baseline out when she was about to put away a winner to lead 2-0. Classic Svitolina took charge as she battled hard from the baseline as Gavrilova’s forehand let her down with a trio of strokes just wide. Svitolina won the set, her first of the year against Gavrilova, and with that the flood gates opened. Svitolina soared through the second set and sealed the victory with a neat return winner.

Final thoughts: Svitolina’s had a superb week and i’ve been impressed with what i’ve seen so far. She’s definitely been trying to take a few more chances – against Gavrilova it wasn’t entirely successful as she often came forward and then retreated when she couldn’t put it away, but it won’t be a process that changes overnight and there are at least some encouraging signs.

Radwanska’s Asian Swing has been dominated by a pair of brutal losses to Wozniacki and Kuznetsova in Tokyo and Wuhan respectively. Aside from those two matches, she’s looked really good. The draw has dealt her a helping hand but Svitolina will be a tough opponent. I’d still question whether the Ukrainian player has enough to rock the boat in this particular match-up but Svitolina should draw confidence from the second set of their New Haven final where she battled back into contention and was just one point from forcing a decider…