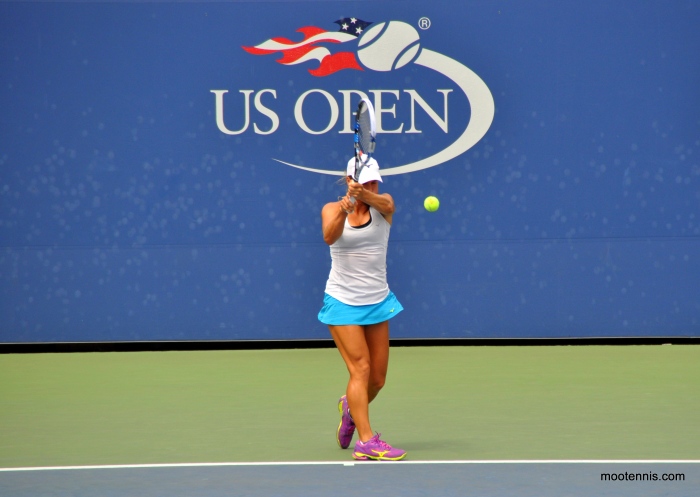 The number two seed, Garbiñe Muguruza will continue her title defence in Beijing where she will play Yulia Putintseva in the second round. Both players were forced to three sets in their opening round matches on Saturday.

Muguruza has been struggling for form all year bar the French Open and she delivered another unconvincing display on Saturday – the difference on this occasion was that she found a way to win. A sullen Muguruza came from a break down in the deciding set to defeat Irina-Camelia Begu, 2-6 6-2 6-3. The Spaniard had lost her last match to Begu in Madrid.

Muguruza had made a promising start, earning two early break points with the chance to go up *2-0. She didn’t take them, a pre-cursor to the remainder of the first set as Begu won the big points. Muguruza had game points in both of the service games where she was broken. The Spaniard gave Begu too many angles to work with who played a fine set, taking it 6-2.

After an exchange of breaks in the second set, Muguruza had a slice of luck with a net cord winner with Begu at game point at *2-3 *Adv-40. Muguruza went onto break in that game via a Begu double fault and never looked back, forcing a decider. Muguruza reeled off four straight games from 2-3* down in the third set as she improved the depth on her groundstrokes, kept things stable on serve and most important of all, took advantage of a significant lapse from Begu who produced double faults in the critical moments. Even when Muguruza won the match, she showed no emotion on her face – there were a couple of testy changeovers with coach, Sam Sumyk. A win is a win but Muguruza will need to up her game.

Putintseva saved a match point in an eventful first round match against Jelena Ostapenko, winning the last four games for a 6-1 3-6 7-5 victory. Putintseva was typically excited at the win with a full-blown celebration that didn’t seem to go down too well with Ostapenko based on the handshake. However, it was a noteworthy win for Putintseva as she had lost a match from match point up in Tokyo to Magda Linette.

Putintseva was a passenger at times in the match as Ostapenko showed what she is capable off with five brilliant games in the middle of the match where she was striking the ball beautifully and decisively, with an avalanche of winners. However, it was Putintseva’s consistency and touches of variety that helped her to stay in the match as Ostapenko self-destructed at the end including a tame double fault on her match point.

And the handshake. 😍 Amazing.

Head-to-head record: Muguruza and Putintseva will be playing each other for the first time on the WTA tour.

Interesting stat: The win against Begu was the fourth time in 2016 where Muguruza has come from a set down to win in three. Muguruza is 7-5 in three set matches in 2016.

Final thoughts: Muguruza’s gameplan is normally quite simple – a big serve and coming forward to close points out with drive volleys. Recently, she’s looked more uneasy up at the net. Putintseva will likely draw confidence on the win over Madison Keys, another big hitter, in Tokyo two weeks ago. Putintseva’s variety/intensity can be a handful for opponents but the Spaniard still has the facets to her game, despite her recent ropey form, that should see her through in favourable conditions on this fast court where she excelled last year.