Tennis at the Olympics has concluded and we are straight into one of the biggest tournaments of the season at the Western & Southern Open in Cincinnati. This post profiles the top 16 seeds including their recent record at Cincy which makes for interesting reading (hopefully!) as half of the seeds lost in the first round last year. As always, i’ll endeavour to keep the blog updated over the next week but i’m already playing catch-up and I am suffering from Olympics fatigue. Let’s take a look at the seeds…

Note – Serena Williams has pulled out of Cincy

Angelique Kerber (2): After scooping the silver medal in Rio, it would be a surprise to see Kerber play Cincy. However, as the world number one position is beginning to come up for grabs, it may give her the impetus to overcome weary legs to compete. Her first match of the week in Cincy would be against either Kristina Mladenovic or Kateryna Bondarenko.

Simona Halep (3): Skipping the Olympics may have been a favourable move for Halep in the run-up to the US Open. The Romanian player is on a ten match winning streak having won her two previous tournaments in Bucharest and Montreal. While many players will no doubt be feeling fatigued after the Olympic experience, Halep should be fresh. The Romanian player will take on Yulia Putintseva or Annika Beck in the second round.

Garbiñe Muguruza (4): Since winning her first Slam at the French Open, Muguruza has compiled a 3-3 W-L record on tour. However, the Spaniard has played just three tournaments since with little opportunity to build momentum. One advantage of early exits in Wimbledon and Rio is that she should have had plenty of time to recover physically from her mid-season endeavours. First up in Cincy will be a testing opener though against either Sara Errani or CoCo Vandeweghe.

Agnieszka Radwanska (5): It was another less-than-favourable Olympics experience for Radwanska who looked to be fighting a losing battle from the get go following a horrendous journey to Rio. The slow courts were also not ideal as she lost in the first round to Zheng Saisai. The season has gone a little pear shaped after a very bright start and she’ll be looking to get back on track against Lucie Safarova or Andrea Petkovic in the second round.

Roberta Vinci (6): After a super start to the year, Vinci has struggled to regain her form following an injury-riddled clay court season. A first round loss at the Olympics to Anna Karolina Schmiedlova was surprising despite her recent form. As we approach the US Open where Vinci reached the final in 2015, there are further injury concerns for the Italian player. Vinci could play Daria Kasatkina in the second round who defeated her in Toronto.

Svetlana Kuznetsova (7): Competing in her 3rd Olympics, Kuznetsova reached the last 16 where she lost a three set thriller to Johanna Konta in the third round. Consistency-wise, it’s been a super year for Kuznetsova and she will take on a qualifier, Alison Riske or Varvara Flink, in the second round.

Dominika Cibulkova (8): The heavy schedule over the past few months finally caught up with Cibulkova in Montreal where she won just two games against Eugenie Bouchard and was then forced to pull out of the Olympics due to a left calf injury. Still, it’s been a fabulous year for the Slovak player who is at number six in the Race. First up, in her first match for three weeks, will be Irina-Camelia Begu or Johanna Larsson. 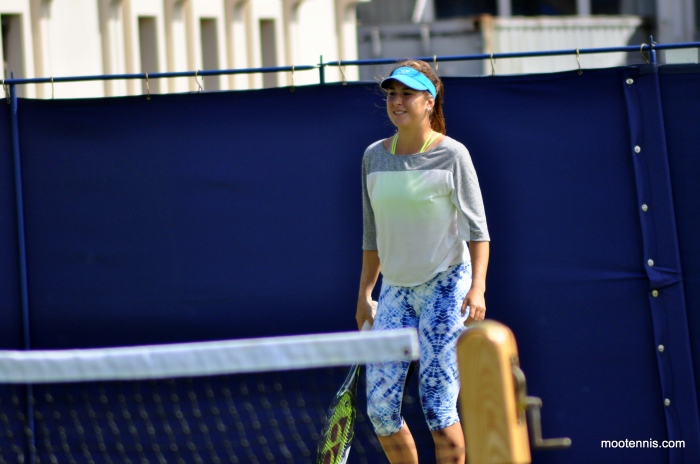 Carla Suárez Navarro (9): The Spaniard beat two Anas (Ivanovic and Konjuh) to reach the third round of the Olympics where she went out in three sets to fourth place, Madison Keys. It’s been a stable year so far for Suárez Navarro without really setting the tennis scene alive. On a positive note, she should have more energy compared to this time last season where she was in the midsts of what became an eight match losing streak. Suárez Navarro will play Kiki Bertens or Alizé Cornet in the first round.

Johanna Konta (10): It’s been another season of firsts for Konta as she won her first WTA title Stanford, cracked the world’s top 15 and played the Olympics. This summer has been completely new territory for Konta who is playing the trio of Stanford, Montreal and Cincy for he first time. In yet another first, Konta will open in the second round against either Ana Ivanovic or Donna Vekic for a first career match-up.

Timea Bacsinszky (11): The memory of a gutting first round loss in Rio was swiftly forgotten for Bacsinszky thanks to a silver medal with Martina Hingis in the women’s doubles. Bacsinszky is one of many players who will remain a doubt for Cincy following Rio; considering how she has scheduled in the past, it would be a surprise if she does play. If she makes the journey, she could end up playing Zhang Shuai again in the second round who defeated her in the first round of the Olympics.

Belinda Bencic (12): 2016 has been a rocky ride for Bencic with numerous injuries (back and wrist to name just two) derailing large chunks of her season. Skipping the Olympics will have been a tough decision but Bencic will have plenty more opportunities to compete in the future. Coming through her first match, against Louisa Chirico or Timea Babos, unscathed and pain-free will be the most important thing.

Sam Stosur(13): The Aussie matched her seeding in Rio, reaching the third round where she lost out in straights to the silver medalist, Angelique Kerber. Stosur, who has a good record in Cincy, plays Barbora Strycova or Eugenie Bouchard in what will be a tough first match.

Karolina Pliskova (14): Compared to her exploits of 2015, Pliskova should be feeling fresh as a daisy! While there have been some solid victories along the way, Pliskova’s struggles at winning Slam matches continues to thwart her. First up in Cincy will be Jelena Ostapenko or Anna Karolina Schmiedlova

Anastasia Pavlyuchenkova (15): A second round loss to Monica Puig in Rio seemed a disappointing result at the time for Pavlyuchenkova but that was put into perspective by Puig’s magnificent run to the gold medal. Pavlyuchenkova has been playing much better of late and has a great record in Cincy having reached the semi-finals back in 2010. She will play Viktorija Golubic or Kurumi Nara in the second round.

Elina Svitolina (16): Scraping in as the number 17 seed after Petra Kvitova withdrew, Svitolina moved in the draw and will now avoid Serena Williams who she was originally due to play in the second round. It would have been a Rio rematch after Svitolina reached the quarters by virtue of a first ever win over Serena. With a bye now in the first round, Svitolina will play either Caroline Garcia or Daria Gavrilova.

We have few fresh faces heading to #CincyTennis courtesy of WCs.

Garbine drying her own court!! pic.twitter.com/AaDuRwochB

Belinda is back in action here at Cincy 🇨🇭🇨🇭 pic.twitter.com/Wul9VvQtww

.@Riske4rewards after her win today; she seemed as excited to see her fans as they were to see her! 😊 #CincyTennis pic.twitter.com/m9mYxHG3eQ

Who do you think will win Cincy? Have your say in the tournament poll below and as always, comments are appreciated!

Follow Moo’s Tennis Blog on Twitter (@Moo_Tennis) HERE and Facebook HERE. If you are entered into the Tennis Draw Challenge game, remember to get your picks in HERE!