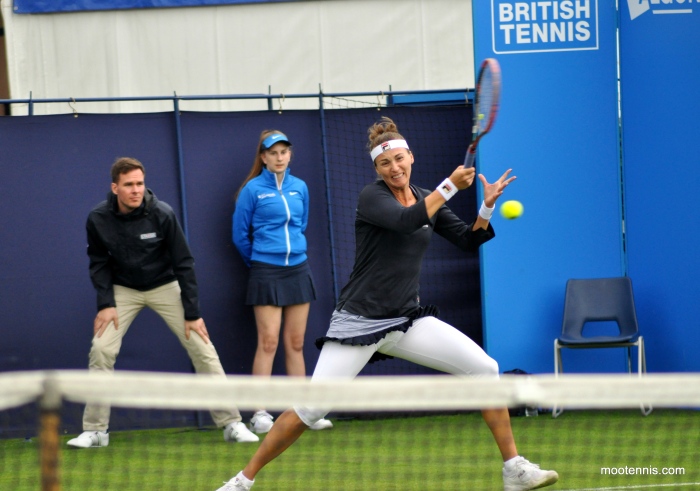 Of the final eight, Shvedova is probably the biggest surprise. While she has history on the grass and has played well on this surface before, the 28-year-old arrived at Wimbledon having won just one match on tour since Charleston in April. This was a first round qualifying win over Louisa Chirico in Eastbourne. Shvedova has had a challenging draw and come through it with flying colours. Shvedova has defeated Julia Goerges (7-5 6-4), Elina Svitolina (6-2 3-6 6-4), Sabine Lisicki (7-6(2) 6-1) and Lucie Safarova (6-2 6-4). Shvedova’s win over Safarova was her fourth consecutive victory over the Czech player. Shvedova played a superb match and didn’t face one break point in the 80 minute contest.

Venus made an extremely slow start in her fourth round match against Carla Suárez Navarro, quickly going down a double break. Her leg has been heavily taped all year and it looked as if the effects of two lengthy matches against Maria Sakkari and Daria Kasatkina might have taken its toll on the body. However, Venus began to wake up and fought her way back into contention. Suárez Navarro was unable to serve out the first set at *5-4 as Venus came back to force a tiebreak. The American player was ahead in the tiebreak when a brief shower hit SW19. Venus kept her focus to win it on the resumption and eventually prevailed, winning on a super match point to seal a 7-6(3) 6-4 victory.

Asked Yaroslava Shvedova if she thought she could make the QFs when she got here. “I was wondering if I could win a round.” Venus next.

Anything Serena can do…

Venus Williams is back in the big time at #Wimbledon https://t.co/GS4SkAc1hV

Venus: “When the rain came it was very emotional for me because of the last match. I was like 'Please God, not again.' I was dismayed."

Head-to-head record: Surprisingly, this will be a first career match-up between Venus and Yaroslava.

Interesting stat: This is just the second tournament in 2016 where Shvedova has won four matches in a row. Currently ranked at number 96 in the world, Shvedova is set to crack the world’s top 50 again in next week’s rankings.

Final thoughts: This could be a cracking match as both players have games suited for the grass and can hitttt the ball. I think the quality will depend on Venus’s level. She came out very slow against Suárez Navarro and may not be afforded the same luxury to get back into contention against a super sharp, Shvedova, if her performance against Safarova is anything to go by.

Shvedova is a two-time Slam quarter-finalist but has battled with her nerves in the crucial moments of matches. While I think she’s playing the better tennis and will no doubt be a threat in this match, i’d be wary as to whether she could get across the finish line if she gets into a winning position against such a fighter in Venus.