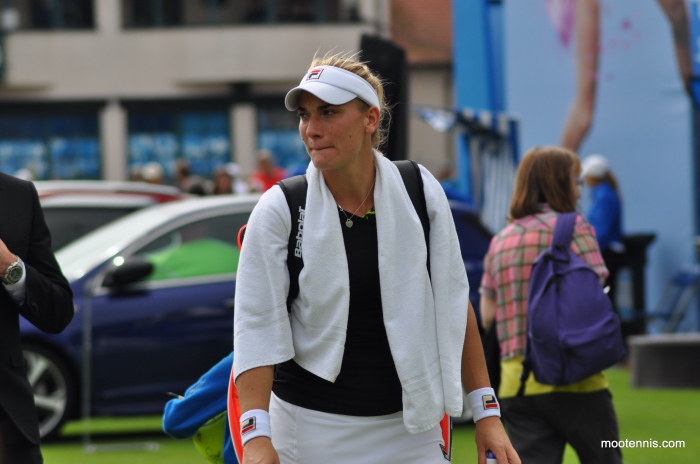 Timea Babos will be seeking to reach the third round of a Slam in singles for the first time in her career when she faces the number 27 seed, CoCo Vandeweghe at Wimbledon on Thursday.

Babos has had an excellent 2016 season in singles; while she has still played plenty of doubles, most recently with Yaroslava Shvedova, there seems to have been a concerted effort to improve in singles following the end of her long-term doubles partnership with Kristina Mladenovic. Babos has won a main draw singles match at 13 of her 17 tournaments this year, successfully building on a great end to 2015 where she won a $125k tournament in Taipei. Babos looks much fitter and more focused as her confidence continues to grow.

Babos has still looked a little suspect mentally when in winning positions, but the Hungarian player has secured some excellent wins through the year over the likes of Venus Williams, Karolina Pliskova, Sara Errani and Eugenie Bouchard. Babos won her first round match at Wimbledon against the Brit, Katie Swan with a commanding 6-1 6-3 victory in 61 minutes. The 23-year-old dropped just four points behind her first serve in the entire match.

Vandeweghe’s year has had its fair share of peaks and troughs; the disappointments were mostly pronounced around the clay court season where Vandeweghe lost ground in her attempts to qualify for the singles tournament at the Olympics in Rio. The feisty American has rebounded on the grass, easily her favourite surface, with a second WTA title in Rosmalen, a semi-final showing in Birmingham and now a strong start at Wimbledon. Vandeweghe overcame a potentially tricky first round opponent in Kateryna Bondarenko, 6-2 7-6(3). Vandeweghe’s return let her down in the second set but she was able to rely on the big, booming serve, notably the second serve, which won twice as many points as Bondarenko’s.

The first set and a half featured quite a lot of short points with the serve dictating, but the match reached a fascinating crescendo as the points became much longer and the pair dueled it out with some cracking rallies. Bondarenko hit the deck at one point as she raced into the net to try and keep a rally alive. The fall really seemed to knock her sideways and although she was still hitting the ball well in the second set tiebreak, Vandeweghe was clutch to take the match in straight sets. It was great to see the crowd getting involved at the end and enjoying some quality women’s tennis.

And that's a wrap on Day 2 at #Wimbledon pic.twitter.com/bTtTsbmV3U

Head-to-head record: This will be a first career match-up between the pair on the WTA tour.

Final thoughts: This is another match where Vandeweghe should be wary as Babos is a very competent player and particularly on the grass. Vandeweghe’s serve, both first and second, give her a significant edge on the grass and she’s the type of player that if she has the confidence and is feeling good about her game, can elevate it several notches. Babos is a great server herself but Vandeweghe has that spark that has already shown signs of igniting on grass this year. Babos is looking to break new ground at a Slam but on recent form, Vandeweghe will be the favourite to prevail to the third round.