This post covers two third round matches set for Sunday’s schedule at the 2016 BNP Paribas Open in Indian Wells; an all-seeded match-up between Simona Halep and Ekaterina Makarova, and the number 19 seed, Jelena Jankovic up against CoCo Vandeweghe. For a full round-up of what happened in the top half of the women’s draw on Friday, click HERE. 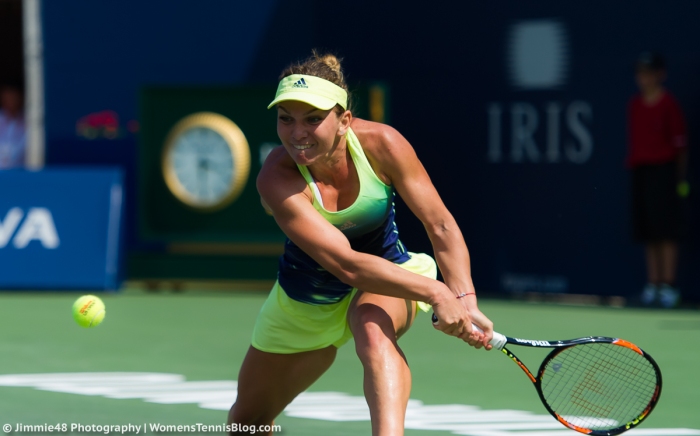 Simona Halep continues the defence of her Indian Wells title on Sunday when she plays Ekaterina Makarova in one of just two all-seeded matches from the top half of the women’s draw.

Halep arrived in the desert having lost her last four matches on the WTA tour; in her last competitive outing, Halep was unable to take advantage of a set and a double break lead against Elena Vesnina, eventually losing, 7-6(1) 4-6 1-6. Halep has had a couple of weeks off the tour and spent some time training with Steffi Graf and Andre Agassi in Las Vegas. Halep looked at ease in the pictures from the All Access Hour and also commented that she was finally fully fit, having got over the achilles injury and health-related issues.

All this translated into her first round win over Vania King, which was by far and away her most complete performance of the year so far. Halep won, 6-1 6-1 in 55 minutes and finished with some positive stats. She was moving well and most importantly, dictating play with solid striking off both wings.

Like Halep, Makarova headed into Indian Wells having endured a miserable February. The 27-year-old was on a four match losing streak that stretched back to a nail-biting 6-8 third set loss to Johanna Konta in the fourth round of the Australian Open. In Indian Wells, Makarova enjoyed a solid win over Lucie Hradecka, coming through, 6-4 6-4. Hradecka buckled twice serving at *4-5, throwing in a shocker of a game in the first set and ending with a double fault. Makarova herself played a very poor game serving for the match at 6-4 *5-3; this included two groundstroke errors and a double fault down break point. Hradecka had game points to level up at 5-5 in the second set but Makarova was a touch more clincial, producing two meaningful backhand down-the-lines to seal the win.

Halep hands King a double breadstick. Positive sign for the 2015 IW champion after a bruising start to 2016. 18 winners to 9 unforced erros.

Head-to-head record: Halep leads Makarova, 2-1, in their head-to-head. Makarova’s lone win came at the Australian Open in 2015, a surprisingly straightforward, 6-4 6-0 victory. Halep rebounded though in Dubai, battling to a 6-3 6-1 7-5 victory en route to the title.

Interesting stat: Makarova has been one of the most consistent players on the WTA tour these past few years. However, after a period of injury and poor form at the start of 2016, she is currently down at number 32 in the world, her lowest ranking since the summer of 2012.

Final thoughts: Both players have had similar patterns of play this year having failed to win a match on the WTA tour since the Australian Open. Halep was very impressive in her second round match but with respect to King, Makarova will present a much greater threat. One point about Makarova is that she seems more and more mentally fraught these days. Even in her match against Hradecka, there were several vocal outbursts. This will be a solid indicator of Halep’s form and my guess would be that she comes through in comfortable fashion…

Jankovic won just her 5th match of the season, beating Carina Witthoeft in straight sets on Friday, 6-1 6-3. The Serb has gone on a couple of walkabouts this year, but stayed in the moment and managed to put the match to bed, staving off two break points in a moonball-heavy final game. Witthoeft hadn’t looked impressive despite a first round win over Irina Falconi and while Jankovic is the better player, that’s not always the deciding factor!

Vandeweghe has turned her season around in style; down under, she went 0-3 with losses to Irina Falconi (7-5 4-6 3-6, Auckland), Jelena Jankovic (3-6 4-6, Sydney) and Madison Brengle (3-6 4-6, Australian Open). Since then, Vandeweghe has won five out of seven matches. In an unstable February, Vandeweghe was one of the most consistent players as she won two matches each in Dubai and Doha. This included three top 30 wins over Karolina Pliskova, Kristina Mladenovic and Belinda Bencic. Vandeweghe carried that form into Indian Wells where she has yet to drop serve in wins over Kiki Bertens and Svetlana Kuznetsova.

Saturday’s win over Kuznetsova, 6-4 6-3 in one hour and 28 minutes was a particularly impressive performance with the Russian player not having a bad match at all. Vandeweghe needed just one break of serve in the first set, winning that particular game with back-to-back return winners. The pair played two deuce games to open the second set and Vandeweghe won them both. The American player sealed the second break of serve, and the match, with yet another return winner.

First seed to fall, Vandeweghe d. Kuznetsova, 6-4 6-3. After going winless down under, CoCo has won 5 out of her last 7 matches.

Interesting stat: This is the first time in her career that Vandeweghe has reached the third round of Indian Wells.

Final thoughts: Indian Wells is a special place for both players; Jankovic has won the title before and reached the final in 2015, while Vandeweghe has the home support and is comfortable in the surroundings. Vandeweghe has played some very committed matches of late and her serve, a huge weapon when it’s on, has been on the money. Jankovic won their last encounter in Sydney but my guess would be that if Vandeweghe can improve her serving figures from that particular match, she’s got a real shot at producing yet another upset…