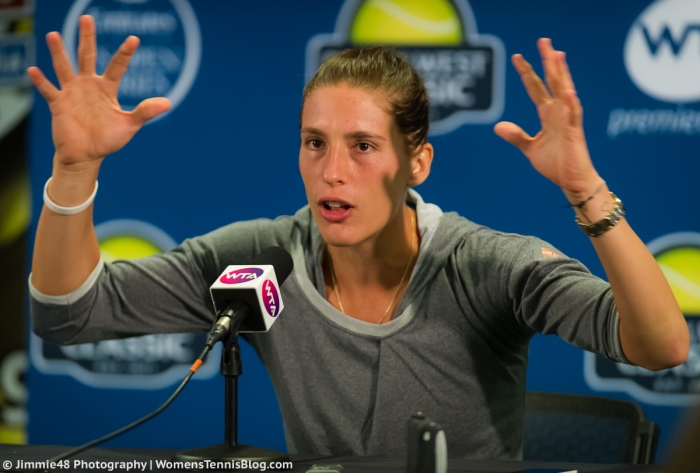 An all-unseeded semi-final in Doha will feature the resurgent, Andrea Petkovic up against yet another talented 18-year-old in Jelena Ostapenko. The teens have been making their presence felt in the first two months of 2016 with the likes of Belinda Bencic and Daria Kasatkina already impressing at the Premier tournaments. Ostapenko had been on a barren run of form since *that* match with Naomi Broady in Auckland, winning just one out of her last five matches heading into Doha. In her post-match interview, she spoke about being outside of the main draw when she initially arrived in Doha; with a couple of withdrawals, she made it into the main draw and has been ripping it up since…

Ostapenko looked in a hurry in her first round match, overpowering Zarina Diyas in a 6-1 6-3 victory. Ostapenko then scored two upset wins, beating Svetlana Kuznetsova, 7-6(5) 6-0 and Petra Kvitova, 5-7 6-2 6-1. In an unlikely Premier 5 quarter-final against Saisai Zheng, Ostapenko recovered from a break down in the first set (having originally led 3-0!) to progress in straight sets, 6-4 6-3. The overwhelming takeaway from the chunks of the match I watched were Ostapenko’s court position, up on the baseline and dictating play. This court seems to suit her game and she’s able to hit through her opponents.

It’s hard not to smile at Petkovic’s super turnaround in 2016. Just a few months ago she was contemplating her future in tennis but with time for physical and mental scars to heal, the German player has looked refreshed and is playing with freedom. Petkovic played arguably her best match since Madrid last year (d. Pennetta, 6-3 7-5 in R1) with a 6-1 5-7 6-2 victory over the number four seed, Garbiñe Muguruza. Petkovic’s level was super high in the third set and she barely put a foot wrong. On the other hand, Muguruza looked frazzled after a really frosty changeover with her coach, Sam Sumyk. She put her visor down on the next changeover, clearly emotional.

Back to the beginning of the match; after the Spaniard lost a quick first set and went off the court for a medical time-out, coming back with a taped up thigh, she got stuck in and played a really committed second set. Muguruza saved four break points in a five deuce game at 1-1 and then broke in the next game. Petkovic played a blinding service game at 2-5 which gave her the momentum to fight back to 5-5. Petkovic was up *40-0 at 5-6 but a double fault gave Muguruza something to work with as she stepped up her aggression to break and force a decider.

It’s worth noting that this was a super match. In fact, despite Doha’s wild streak of upsets, there have been plenty of decent matches this week and i’ve got a growing list of ones that I want to catch up with! Muguruza did well to hang onto her service game in the first game of the third set, saving five break points, but it was all Petkovic from then on. I loved her post-match interview where she was asked about whether her intelligence helps her on court to which she responded no, because she has no instinct whatsoever!

Jelena Ostapenko waltzes into her first Premier SF, beats Zheng Saisai 64 63. What a week for the teenager. pic.twitter.com/s9uidp2IYs

Head-to-head record: This will be a first career match-up between Petkovic and Ostapenko.

Interesting stats: Petkovic’s win over Muguruza was her first top five win since beating Victoria Azarenka in Beijing back in 2013. She’s also into her first semi-final since Charleston last year. Ostapenko made the semi-finals in Quebec City last year where she happened to beat none other than Naomi Broady to make the final. However, this will be her the first Premier semi-final of her career.

Analysis: I was pretty bowled over by Petkovic’s performance against Muguruza but then again, I felt the same way about how Muguruza played against Babos on Wednesday and she was unable to replicate it in the quarters. Petkovic is definitely the favourite with how consistent she has played the WTA tournaments this year but Ostapenko represents a significant threat. She’s taken out two seeds with a couple of emphatic sets and won’t be afraid to go for her shots. The concern about Ostapenko is that she has had some shaky losses and can go careering off the tracks; twice this year she has lost from match point up although she seems to have steadied the ship in Doha. I think this could be a very competitive match and i’d go with Petkovic to come through in three sets.