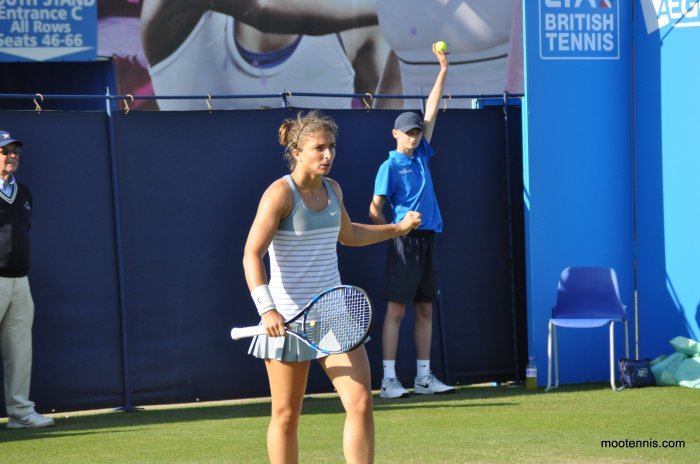 The first of the unlikely semi-finals at the Dubai Duty Free Championships will feature the world number 21, Elina Svitolina up against the world number 22, Sara Errani. Svitolina had won just one match this year on the WTA tour heading into Dubai but has tripled that figure with another Premier semi-final appearance. Svitolina backed up her upset win of Garbiñe Muguruza with a three set quarter-final victory over CoCo Vandeweghe, 6-4 1-6 6-2. Svitolina won the last six games of the match. Serving out sets and matches though has been a trial for Svitolina this week…

R1: Svitolina twice failed to serve out the first set against Cepelova in a 6-3 6-1 win

Again, Svitolina failed to serve out the first set of her match against Vandeweghe, breaking serve to win it, 6-4. After the American player won eight of the next nine games, Svitolina then went on a run of her own. Andddd this time, Svitolina served out the match at the first time of asking! She had to save two break points but actually finished it off with some positive play; a gorgeous dipping forehand pass followed by an advance into the net after a decent serve (it wasn’t a great volley but I liked the intent and decision to move forward!) which Vandeweghe could only hit into the bottom of the net.

Errani was 1-5 down in her first match of the week to Saisai Zheng before mounting a sizeable comeback, winning in straight sets, 7-5 6-3. After a surprisingly comfortable win over Yaroslava Shvedova in the second round, Errani was forced to rely on her battling qualities once more. In a lengthy quarter-final that lasted exactly two hours, 22 minutes and 22 seconds (!), Errani fought back from a 1-4* double break deficit to win, 4-6 6-1 6-4. It’s interesting to note that Errani has reverted back to her original service motion this week. No matter what you say about Errani, her game and her serve, you cannot deny her fighting spirit.

Perfect passing shot from @ElinaSvitolina during her match against Vandeweghe! 👌#FamEli pic.twitter.com/d7IXQcWbqS

"I'm not sure if @Justine_Henin would be happy with the second set, but a win is a win 😉" –@ElinaSvitolina #WTA https://t.co/dXGL3DhXgy

Head-to-head record: In their only previous match, Errani defeated Svitolina, 6-2 6-3 in the quarter-finals of Paris indoors… I miss this tournament!

Interesting stat: In three matches this week, Svitolina has hit 29 winners to a whopping 90 unforced errors. I don’t think anyone has come out looking good from the stats this week!

Final thoughts: This could be a long one. A really long one. Both players are well known for their ability to get plenty of balls back in play. Svitolina, now with Justine Henin in her box, will need to play a more aggressive match if she’s going to come through. I still can’t quite believe she managed to win a three set match against Vandeweghe hitting just six winners! I’d definitely fancy a three setter. My concern would be whether Svitolina can hit through Errani and do anything with the Italian’s serve. I think this could be a good match-up for Errani but find myself leaning towards Svitolina…