This week represents the final opportunity for players to get match practice before the Australian Open with nine of the world’s top 15 choosing to play the Apia International in Sydney. Once again, it’s one of those draws that has produced many first round matches that… you cannot believe are first round matches. I’m fully expecting predictions to be DREADFUL this week hahaha… Note that the main draw kicks off on SUNDAY.

*Note – Kvitova and Radwanska have both pulled out of Sydney so this post has been edited.

Simona Halep (1): With a bye in the first round, Halep will open her campaign in the second round where she will play either Kristina Mladenovic or Caroline Garcia. The world number two, faced with the prospect of playing Victoria Azarenka in the second round, was forced to pull out of Brisbane with an achilles injury. This is something that has bothered Halep for quite some time. She has been practising though with Darren Cahill in Sydney so i’d expect her to at least play a match. Halep is the type of player who needs matches to play her way into form. As to how far she can go, the injury remains a concern.

Last year’s WTA Finals champion began 2016 right where she left off, winning Shenzhen and cruising through the draw without dropping a set. While it was an impressive start, Radwanska didn’t beat a player inside the world’s top 90. Her first match in Sydney will be against either Sam Stosur or Roberta Vinci. While playing against higher ranked players will be a good test before the Australian Open, fatigue may be a factor if she goes deep in Sydney which you would expect based on the draw and her recent form.

: Defending Sydney champion, Petra Kvitova, will be seeking matches before Melbourne after she was forced to pull out of her first round match in Shenzhen against Saisai Zheng with a stomach bug. Kvitova opens against Sabine Lisicki, which should be a big-striking affair. Lisicki, still on the comeback from a knee injury, lost all of her singles matches at the Hopman Cup. The courts suit Kvitova’s game and she’s always one for going on a run when you least expect it… i’d fancy her to do well in Sydney.

Angelique Kerber (4): Starting the year with a bang, Angelique Kerber reached both the singles and doubles finals in Brisbane. However, she failed to turn the tables on Azarenka in the final, losing, 6-3 6-1. Kerber had started the match in encouraging form, but committed a lot of unforced errors towards the end. There was definitely a sense of Kerber looking to be more aggressive in Brisbane and all in all, it was a great first week. The German player had stated in press she wanted more matches before Melbourne; in the first round of Sydney she takes on Elina Svitolina. Kerber leads the head-to-head, 3-2 and won their last match in Stanford in 2015, 6-3 6-1.

Karolina Pliskova (5): The main topic surrounding Karolina Pliskova is her continued pursuit to play every possible tournament that may exist. After implying that she will change up her schedule in 2016, that hasn’t been the case so far; she played an extended run of the IPTL and opened at the Hopman Cup where she won two of her three singles matches. Burn-out is still a concern with Pliskova, but she did end 2015 in great form, reaching the final of Zhuhai and winning two key rubbers at the Fed Cup final. Her first round match against Ana Ivanovic is probably the pick of the bunch… more on that later.

Timea Bacsinszky (6): Joining the ASICS team for 2016, Bacsinszky will be seeking her first win of the new season when she plays Anna Karolina Schmiedlova in the first round of Sydney. Both players suffered crushing first round losses in Brisbane; Bacsinszky won just three games against an in-form, Anastasia Pavlyuchenkova. While everyone had reason to be rusty, Bacsinszky can be cut some slack as she did end 2015 with a knee injury. This will be a huge match for both with one player going into Melbourne without any wins. Schmiedlova has won their two previous meetings, both 7-5 in third sets.

Carla Suárez Navarro (7): After a rocky end to 2015, Carla Suárez Navarro pressed the reset button in 2016 and began with a decent run to the semi-finals in Brisbane. She went 2-0 in three set matches including a 7-5 third set victory over Varvara Lepchenko in the quarter-finals. The Spaniard spoke in press in Brisbane about looking to be more aggressive and opened up more about 2015, pointing out the loss at Wimbledon (to Jelena Ostapenko, 6-2 6-0) was a real blow to her confidence. She will play Sara Errani in the first round of Sydney; Errani leads their head-to-head, 7-3, having won their last three completed matches.

Belinda Bencic (8): BB opened her 2016 campaign with a ruthless display against Sara Errani, winning, 6-1 6-2, and breaking the Italian player’s serve on all eight occasions. As her draw seemed to open her, Bencic surprisingly lost out to Samantha Crawford in the second round, 7-5 7-5. The Swiss player has already made a better start than she did in 2015, having gone winless in Australia last year, but will be keen for more matches. She plays a qualifier in the first round; if she wins that, the Sydney GOAT, Tsvetana Pironkova or Lesia Tsurenko, will await her in the second round.

Unseeded players to watch out for… 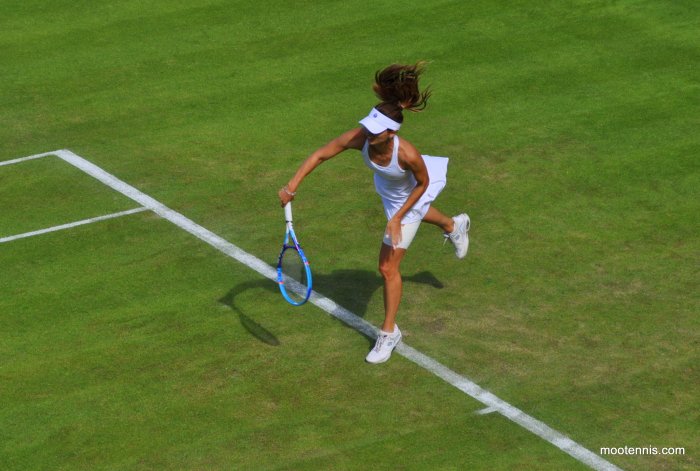 Speaking of Tsvetana Pironkova, she’s always one to watch out for in Sydney! Pironkova has won 14 matches in her last two appearances in Sydney, coming through qualifying on both occasions to win the title in 2014 and reach the semi-finals in 2015. Also, i’m intrigued to see who Halep plays in the second round; i’d quite fancy Caroline Garcia to have a decent run if Halep is still struggling with the injury. She’s always a flight risk when serving out sets and matches, but Garcia won all three of her singles matches at the Hopman Cup which was an ideal way to start the year.

Daria Gavrilova will also be one to watch after a wonderful week at the Hopman Cup where she won the tournament with partner, Nick Kyrgios. While she may be fatigued, the excitement from that run could propel her through a few rounds as she has a workable draw, opening against a qualifier with the winner playing Schmiedlova or Bacsinszky in the second round.

First round match to watch

They are all noteworthy but i’m most intrigued by Ivanovic v Pliskova, which will take place on Sunday. Ivanovic opened the year with a first round loss in Auckland to Naomi Broady. Ivanovic crumbled at the ends of both sets, making a horlicks of the match point when she was in complete control of the point. Pliskova has been playing better and leads the head-to-head, 2-0. Pliskova reached the Sydney final last year while Ivanovic is playing here fir only the second time since 2008. I could honestly see it going either way but i’m leaning towards Pliskova.

The complete women's draw for #SydneyTennis 2016. Some amazing first round matches! pic.twitter.com/rada83k7oK

I am very happy to annouce that I am now part of the ASICS family!@ASICSTennis 🎾🎉😁 pic.twitter.com/Pq5yrLiQ5F

Just received a pleasant surprice from @SydneyTennis , granting me with a MD WC! Yay! 😊 Thank you!

Good morning from Sydney! Getting ready for another day on court! #NoPainNoGain pic.twitter.com/omxVHP6LRc

'Twas the day before #SydneyTennis, And all around the grounds, The players were training, Championship bound. pic.twitter.com/C9WezdsUxV

Who do you think will win Sydney? Have your say in the tournament poll below and as always, comments are appreciated!

Photos in this post by Jimmie48 Tennis Photography and mootennis.com