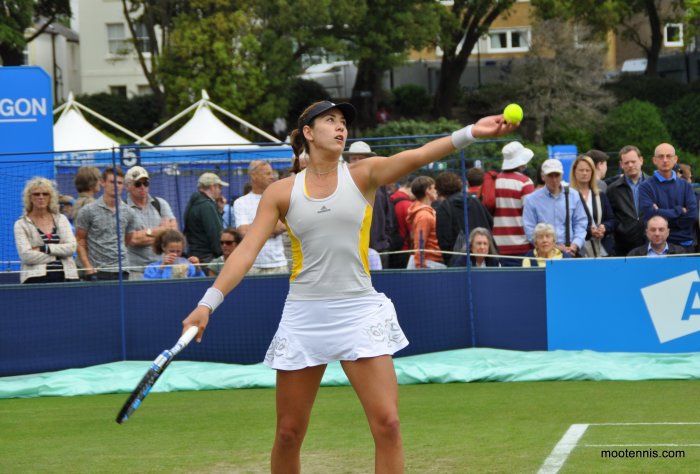 The second semi-final on Saturday in Singapore will pit Garbiñe Muguruza against Agnieszka Radwanska for the fifth time in 2015 with Radwanska seeking her first win over Muguruza this year.

Radwanska looked to be in a rather precarious position in her group after two matches, going 0-2 with losses to Maria Sharapova and Flavia Pennetta. For Radwanska to qualify, she had to win her third match in straight sets and hope that Sharapova would beat Pennetta in straight sets. Just like last year, everything went to plan and she successfully qualified for the semi-finals, winning just one of her three round robin matches. Radwanska was on the brink of defeat but produced some dazzling play to complete a wonderful win over Simona Halep, 7-6(5) 6-1. In the first set, Radwanska missed two set points at 5-4, but was then forced to save three break points at 5-5, all saved with forehand winners. In a gruelling set that lasted well over an hour, Radwanska came from 1-5 down in the tiebreak to win six straight points; she closed out the set with two forceful returns and then one of the rallies of the match.

It was a fabulous set point but Halep had so many chances to win the rally. It was a disappointing performance from the Romanian player as she struggled to close out points against Radwanska and was generally non-clutch, converting just one out of nine break points. Halep appeared to check out at the end of the second set. However, take nothing away from Radwanska who prodcued a special second set performance and came away with her best win of the year.

.@ARadwanska on her way to winning her 500th WTA match in Singapore today pic.twitter.com/GcmqOLQVk9

Muguruza completed a clean sweep of wins over the lefties, going 3-0 in the white group with wins over Lucie Safarova (6-3 7-6), Angelique Kerber (6-4 6-4) and Petra Kvitova (6-4 4-6 7-5). The Spaniard is having a fabulous week after also qualifying for the semi-finals in the doubles with partner, Carla Suárez Navarro. In her last round robin match, Muguruza opened her head-to-head with a win over Kvitova. Early signs suggested this may be a tough match-up for Muguruza, but she soon found her serving range to win the opening set, 6-4. The lack of rhythm from Kvitova is something that will make this a tricky match-up for Muguruza in the future. Kvitova fought back, winning a break-happy second set featuring seven breaks of serve. Muguruza failed to take a break point at 4-4 that would have seen her serve for the match. Kvitova was always ahead in the deciding set but Muguruza eventually prevailed, securing another fine win on her fourth match point.

Radwanska won her first two matches against Muguruza but since then, it has been one way traffic for the Spaniard who has won all four encounters in 2015. Muguruza won in Sydney (3-6 7-6 6-2), Dubai (6-4 6-2), Wimbledon (6-2 3-6 6-3) and Beijing (4-6 6-3 6-4). Their most recent match in China was pretty telling with Muguruza clearly not 100% physically but still finding a way to win. The world number three has excelled in these types of matches all year and has won her last nine matches combined against Radwanska, Wozniacki and Kerber.

There’s a case that both players will be feeling fatigued; Muguruza has played every day in Singapore (singles and doubles) and was on court for two hours and 33 minutes against Kvitova. Radwanska will have had a day of rest but has been sporting strapping on her shoulder and leg in her last two matches, and played a heavy schedule to get to Singapore.

While Radwanska produced a supreme display to defeat Halep on Thursday i’d still fancy Muguruza to reach the final. The Spaniard has been in superb form all week and had a confidence-boosting win over Kvitova, gritting out a closely fought match whilst not playing at her best.