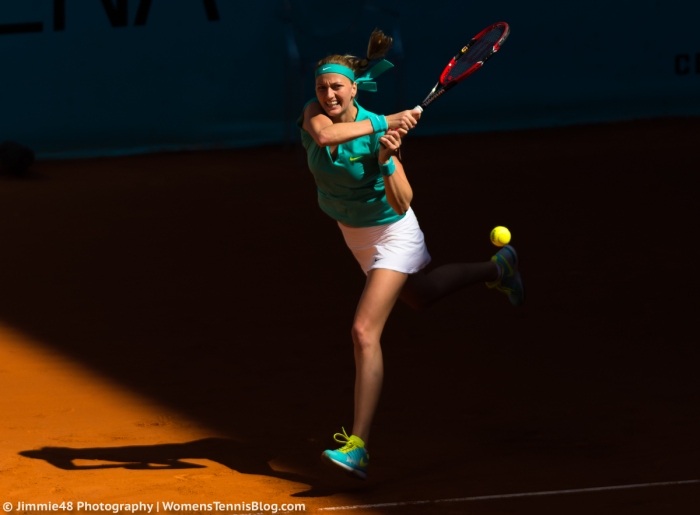 It’s time to blow the new match-up klaxon as the top two seeds in the white group, Garbiñe Muguruza and Petra Kvitova, will meet for the first time on the WTA tour in a match with huge implications for who will qualify for the semi-finals. Muguruza is pretty much there but Kvitova still has plenty of work to do…

There’s only one possible scenario where Muguruza doesn’t qualify; if Kvitova wins in straight sets and Kerber wins in straights, it will come down to % of games won where Muguruza could miss out. For Kvitova, a win would put her through to the semi-finals IF Kerber fails to beat Safarova. Otherwise, it could get messy.

Kvitova won her first match of the week, a straight sets victory over Lucie Safarova, 7-5 7-5. Petra owns this match-up and she broke Lucie’s serve at 6-5* in both sets. It was an improved display from Kvitova compared to her straight sets loss to Kerber, hitting 25 winners to 23 unforced errors; however, it still wasn’t vintage form from the former Wimbledon champion and her fitness and energy levels remain a concern. In the first set, Kvitova saved a break point at *5-5 *30-40, playing her best point of the match (at that stage), hitting a purposeful forehand to drag Lucie out wide before finishing the point with a backhand winner.

Kvitova slumped a little at the start of the second set, going down a double break, but was soon back on level terms. Like the first set, she played some excellent tennis on a crucial point; at 5-5 30-30, Kvitova was on the defence but managed to stay in the rally with Safarova eventually going long. There were a couple of gifts from Safarova in the final game but Kvitova had done the hard work. In the end, a superior winners to unforced errors differential (+2 to -5), a higher number of first serve points won (75% to 55%) and basically playing the big points better was the difference. Regarding Petra, check out a great piece from the WTA Insider account with Petra’s long-term coach, David Kotyza (linked below)… It’s a fascinating read.

Next time we'll be on the same team. Thanks for a great match @luciesafarova #WTAFinalsSingapore pic.twitter.com/bj3xgRITQp

Muguruza produced another superb display, defeating Angelique Kerber for the fourth consecutive time, 6-4 6-4. While this was another decent match at this year’s WTA Finals with some quality tennis on show, the tournament is missing out on that one classic three setter. Kerber gave a sound performance but Muguruza was just on it from the first ball, finishing with stats of 38 winners to 26 unforced errors.

Once again Muguruza served extremely well, winning 71% of first serve points in the first set and 67% of second serve points in the second set. I’ve mentioned this quite a few times over the Asian Swing but the aspect of Muguruza’s game that most impresses me is her ability to finish points at the net. While I thought Muguruza looked uncomfortable at the net in her first doubles match in Singapore, she has look much more assured in singles. This is one of the factors why she is having so much success in this match-up against Kerber and it worked a treat in that tremendous match at Wimbledon. In Wednesday’s match, Muguruza won 28 out of 36 points at the net.

Another aspect of Muguruza’s game that has improved is her movement and defence; on a number of occasions she was drawn out wide by Kerber. Although she still looks awkward, more often that not, Muguruza is able to get back into a neutral position and stay in the rally. While we’ve seen many ups and downs from Muguruza this year and perhaps there’s a case for recency bias, I think she is the real deal. Add to that her infectious personality and I think she’s going to be a huge star on the WTA tour for years to come.

First time match-ups are always exciting and i’m particularly fascinated by this match-up. I’m not sure it will be a pretty watch but it will be compelling nonetheless! Based on recent form and the rising confidence of Muguruza, i’d go for the Spaniard in straight sets. Kvitova played well against Safarova but I have a concern she could be overwhelmed by the sharpness of Muguruza’s ball striking. I’m also concerned that i’m completely underestimating Petra because we know what she is fully capable of… however, i’m not convinced Kvitova can keep her level at a consistently high enough level to contend with an in-form Muguruza.