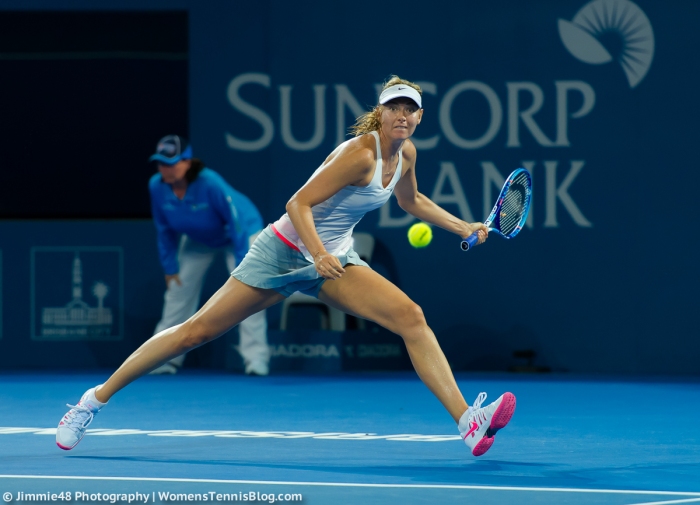 The stand-out match from the red group illuminates the schedule for day 3 at the WTA Finals in Singapore. The two winners from day 1, Simona Halep and Maria Sharapova, will go head-to-head for the first time in 2015 with Halep seeking her first ever win over Sharapova.

In her first completed match since Wimbledon, Sharapova fought back from a set down to defeat Agnieszka Radwanska, 4-6 6-3 6-4, and extend her head-to-head record against the Polish player to 13-2. It was a thoroughly entertaining match and Sharapova battled hard to come from a set down before overcoming a late wobble to seal the win in two hours and 47 minutes. Both players had their opportunities on each other’s serves in a high quality first set but it was Radwanska who broke first in the eighth game and then served it out with aplomb. Radwanska produced just three unforced errors along with a couple of strokes of magic including a no-look half volley winner and a backhand overhead smash.

Radwanska seemed to lose her concentration at the start of the second set as Sharapova went up an early break. Radwanska mounted a brief comeback to prevent Sharapova from taking the double break to lead 5-1 but her challenge ended when she failed to hold her serve at 3-4. Sharapova won the second set with an almighty roar. The third set had a number of pivotal moments; perhaps the key game was Sharapova serving at *0-1 where she saved three break points in a seven deuce game that lasted 13 minutes. Sharapova’s power and precision (most of the time!) was once again the telling factor as she broke in the very next game and again to lead *5-2. Sharapova failed to serve it out at the first time of asking showing signs of rust; this was understandable having not played a completed competitive match for three months.

Radwanska had her chances when Sharapova served for the match at *5-4 but could not take them. Despite a double fault on her first match point, Sharapova sealed her first win since Wimbledon on the second match point.

.@MariaSharapova can’t hardly believe it, but she did just win her first match since Wimbledon! pic.twitter.com/xzFJ8ujjrP

The first singles match of the WTA Finals was over in just 70 minutes as Halep produced an excellent display to turn the tables on the US Open champion, Flavia Pennetta, with a 6-0 6-3 victory. Halep lost just eight points on her serve throughout the entire match, saving the only two break points she faced at the beginning of the second set. The danger signs for Halep were there on the third point when Pennetta unleased a backhand down-the-line winner. However, Pennetta never really settled and Halep was by far the more consistent player, barely giving anything away. The court in Singapore seems to suit Halep’s game and allow her time to implement her gameplan. Against Pennetta, she was aggressive and didn’t let her take control of the baseline rallies.

There were a few more errors from Halep in the second set but she maintained control of the match by powering through her service games. She served extremely well but Pennetta’s returning was also off. Halep finished the match with 13 winners to 14 unforced errors, and it was a perfect start as the difference between straight sets and three sets could have a big impact come the end of the week. After losing to Pennetta at the US Open and enduring a rocky Asian Swing, this was an ideal opener for Halep which will give her a solid platform to build on for the rest of the tournament.

All smiles: Safe to say, @Simona_Halep is having a good day in Singapore pic.twitter.com/iC2ZbCo1HX

Sharapova leads Halep, 5-0 in their head-to-head; the pair played three times in 2014 with all three matches going the distance. The highlight of the three was the final of Roland Garros, one of the best women’s Grand Slam finals in recent years. Sharapova won that match, 6-4 6-7(5) 6-4. Halep won the first set of their other 2014 clashes in Madrid and Cincy but Sharapova fought back to win both in three. The quarter-final match in Cincy was another excellent match and a crushing blow for Halep as it looked for a time like it might be the one where she finally got Sharapova.

I’m excited about this match-up but i’m not confident in making a pick! Originally i picked Sharapova over Halep pre-tournament. After the first set of matches from the red group, i’m swaying! I believe that Halep has more strengths compared to Radwanska that can threaten Sharapova and although the head-to-head is a concern, the last three matches have all been close. Sharapova produced an encouraging display against Radwanska but the rust is still there and for some reason, I think that could be more apparent in this match. Halep’s win over Pennetta will have been a real confidence booster and I think that she won’t be better placed to score a win over Sharapova. It won’t be easy, particularly against a fearsome competitor and with the head-to-head as it stands, but my hunch is that Halep might break her duck in this one.