The exits of Petra Kvitova, Sabine Lisicki and Angelique Kerber have shaken up the bottom half of the draw. It’s going to be so strange not to see Petra, Sabine and Angie in the second week because they have been household names in the latter stages of Wimbledon. It’s going to be exciting though. Let’s start with a poll (thanks for the idea, Vithun) of who you will think will come through from the bottom half of the women’s draw to reach the final.

And there goes Petra… my predictions took an absolute battering on Saturday. Hands up again, I messed up! Jelena Jankovic produced her best performance on grass for…. well, I can’t remember a better performance from JJ on grass! Jankovic came from a set and a break down to beat Petra Kvitova, 3-6 7-5 6-4. This result didn’t look likely for a time as Petra was in control. There was even a hint of peak Petra at the start of the second set. Jankovic though, never went away and battled hard to get the break back. Petra continued to look increasingly error-strewn from the back of the court and Jankovic pounced to break Kvitova’s serve for a second time to win the set, 7-5.

Kvitova took a 7 minute break after the second set. On resumption, Jankovic served extremely well and Kvitova struggled to get returns into play. The turning point appeared to come at 4-4 with Jankovic serving at *15-30. Kvitova was in control of a rally when she challenged one of Jankovic’s balls close to the line. It turned out to be a poor judgement as the ball caught the line and Jankovic won the point and then the game. Kvitova went up *30-0 serving at *4-5, but she looked flat, sluggish and nervous as Jankovic pounced with some stunning returns to bag a massive win. It’s just classic that Kvitova beat Jankovic on clay earlier this year, JJ’s preferred surface and Jankovic beat Kvitova on grass today, Petra’s preferred surface. It’s hard not to be thrilled for Jankovic (while I sob into my pillow for Petra haha) because she’s such a character and a bloody good tennis player when she wants to be.

Radwanska leads the head-to-head with Jankovic, 5-2. It was Jankovic who won their last encounter on the clay in Rome, but Radwanska had won five matches in a row before that. Radwanska has been making serene progress through the draw although she did have to come back from a 0-4 second set deficit against Casey Dellacqua in her third round match. In the form that saw her beat Kvitova, Jankovic has a real shot at making the quarters of Wimbledon. I’m swinging more to Aga though. Jankovic has always struggled to hit through Radwanska and her only win in recent times was on clay, Jankovic’s best surface and Radwanska’s weakest surface. I’m going for Aga. 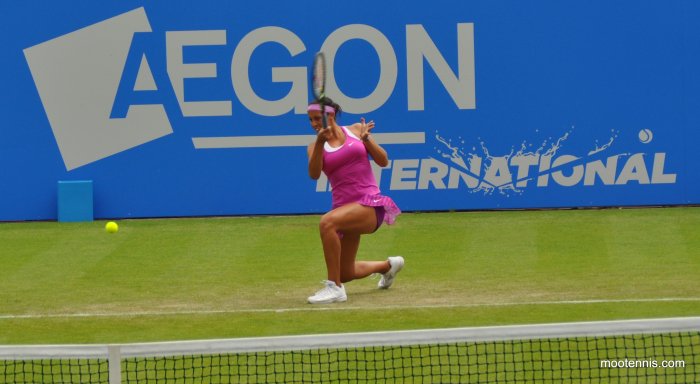 Madison Keys and Olga Govortsova are both in the second week of Wimbledon for the first time. In fact, for Govortsova this is her first ever appearance in the fourth round of a Grand Slam. Govortsova came through qualifying, beating Kimiko Date-Krumm, Maria-Teresa Torro-Flor and Fangzhou Liu. She’s the only qualifier to reach this stage and has done it with main draw wins over Andreea Mitu, Alize Cornet and Magdalena Rybarikova. I was expecting Magda to push on but it was Govortsova who took the opportunity. Keys had a very shaky opener against Stefanie Voegele where she was a set and a break down, but she has been improving match on match and now looks to be in a great position in this draw. Keys defeated Tatjana Maria on Saturday, 6-4 6-4. Keys leads the head-to-head with Govortsova, 1-0 with a 6-3 5-7 6-4 victory in Miami back in 2012. Govortsova will be confident having won six matches, but I think Madison is looking really good here…