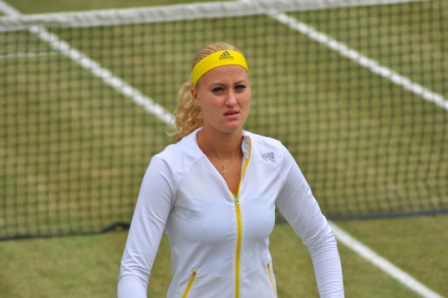 The highest seed remaining in the Birmingham draw, Simona Halep will take on the unseeded, Kristina Mladenovic in quarter-finals action on Friday. The Frenchwoman is enjoying an impressive few months on the tour; on the clay, Mladenovic reached the semi-finals of Marrakech and the final of Strasbourg, and reached the third round of Roland Garros, knocking out Eugenie Bouchard in the first round. Mladenovic has now made back-to-back quarter-finals on the grass after reaching the last eight in the Netherlands where she had match points in a lengthy match against Belinda Bencic. This week, Mladenovic has continued her good form with three notable wins over Alison Riske, Eugenie Bouchard and Barbora Strycova.

Against Bouchard, Mladenovic was the better player on the big points and she came through the third set with a bagel. Her third round match against Strycova was a fun one and demonstrates why she can be so brilliant and frustrating in equal measures. Mladenovic was dominating the first set, serving well and hitting her groundstrokes with power and precision. However, her inconsistency and concentration let her down when serving for the set and Strycova came back to force a tiebreak. Strycova was unable to capitalise in the tiebreak, serving a double fault on set point. Mladenovic has so many facets to her game (I mean that in a good way) and if she can improve the mental side to her game, she’s only going to keep rising up the rankings. It’s not unconceivable that Mladenovic could nick a seeding for Wimbledon if she goes all the way in Birmingham but if she doesn’t, the Frenchwoman will be one of the most dangerous floaters at SW19.

Halep has had a drama-free start to her grass court season with straight set wins over Naomi Broady (6-4 6-2) and Klara Koukalova (6-1 6-3). This will be her toughest match of the week so far. In their only previous match, Mladenovic beat Halep in Paris indoors last year, 7-6 6-4. I think Mladenovic has a real shot at winning this match. Her game is one of those that has the potential to cause Halep problems with a big serve that is effective on this surface and huge groundstrokes. My only concern is whether Mladenovic can stay focused and consistent if she gets into a winning position…