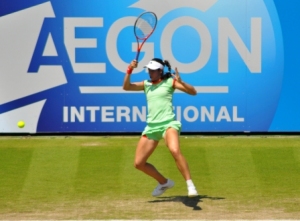 Oh I do love the WTA.  If anyone predicted that Daria Gavrilova and Christina McHale would play a quarter-final in Rome, I DON’T BELIEVE YOU! McHale advanced via a walkover from Serena Williams who withdrew with a right elbow injury.  McHale beat Sara Errani in the second round.  No matter what people will say about Errani’s game and her serve, she is an almighty competitor on the clay and that was a superb win for the American player.

McHale was becoming a relevant player on tour a few years back but it never fully materialised for her.  The picture above is from McHale’s victory over Caroline Wozniacki in Eastbourne in 2012 when she played a really impressive match.  It was the same year that McHale reached her career best ranking of 24.  A bout of mononucleosis didn’t help her cause and she dropping in the rankings through 2013.  To be honest, she has never shown signs of getting back to her previous top 30 ranking.  Since playing a poor match against Danka Kovinic in Charleston and getting double breadsticked by Flavia Pennetta in Fed Cup action, McHale has rebounded remarkably well.  She also qualified for the main draw in Madrid last week where she had Wozniacki on the ropes for a time.

Gavrilova’s run this week has been less surprising considering her form throughout the entire year.  After beating Belinda Bencic and Ana Ivanovic in three set epics, Gavrilova had another terrific win, overcoming Timea Bacsinszky in a lengthy  two setter, 6-4 7-6(0) in two hours and 22 minutes.  Gavrilova has been racking up the big wins this year, showing a fearlessness against some of the best players on tour.  However, she must be hurting after coming through qualifying and spending over eight hours and 20 minutes on court in the last three days combined.  In my opinion, it will come down to Gavrilova and whether she is up for it physically.  This is a HUGEEE match for both players with the opportunity of reaching a Premier level semi-final.  We’ve seen players power through the fatigue, notably Svetlana Kuznetsova in Madrid last week.  It will catch up to Gavrilova at some point but I wonder if the momentum might drag her through this one… 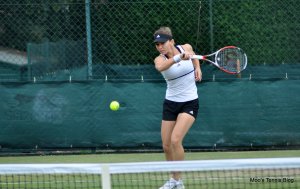 Simona Halep needed just an hour to confirm her place in the quarter-finals of Rome with a first win over Venus Williams.  In a surprisingly one-sided match, Halep won, 6-2 6-1.  It was the unforced error count that was the difference; the pair each hit 12 winners, but Venus hit 22 more errors than Simona.  An all Romanian quarter-final awaits after Alexandra Dulgheru knocked out Lucie Safarova and Ekaterina Makarova back-to-back.  Dulgheru’s win over Makarova in the third round was a little surprising.  Makarova has been so solid for the last 18 months but she has been on a downward trend since Dubai.  In the matches that i’ve watched, she has looked so tense and on edge.  Makarova was a break up in both sets but Dulgheru prevailed, 6-4 6-3.  I’m pleased to see Dulgheru back and winning again after a knee injury threatened to end her career.  Dulgheru’s game is made for the clay and this is where she had her big breakthrough, winning back-to-back titles at the former WTA event in Warsaw in 2009 and 2010.  Dulgheru has had a brutal week after coming through qualifying so i’d be stunned if she has anything in the tank to mount a challenge against Halep.