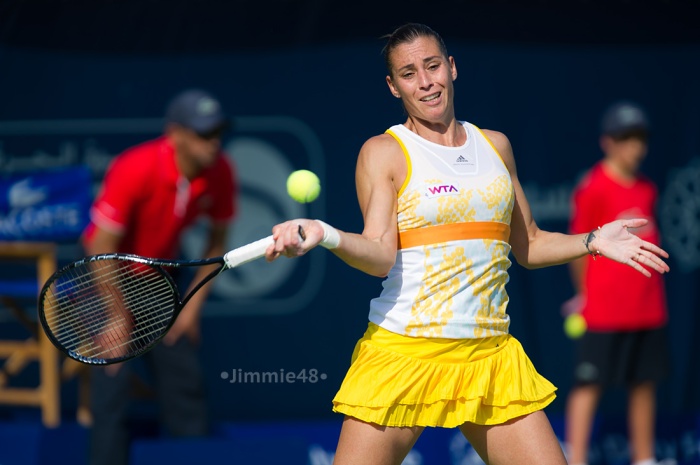 I was soooooo much looking forward to a potential fourth round match between Simona Halep and Victoria Azarenka.  I obviously wanted it too much! Instead, we get Halep against Flavia Pennetta, which is still very intriguing.  Pennetta defeated Azarenka in two tiebreak sets, 7-6(5) 7-6(6) in two hours and 6 minutes.  It was a long match with some great points, but messy ones too.  Both players served for the first set, but it was Pennetta who was rewarded for her aggressive and dynamic play in the decider.  Azarenka is still not quite there and looked a step slow.  She was struggling to chase down balls that I think she would have got to a few years ago.  Azarenka never stopped fighting and rallied at the end of the second set as Pennetta, for the first time, started to play a little passive.  However this was not to be Azarenka’s day.  Pennetta held her nerve in the second set tiebreak and finished with excellent stats of 32 winners to 30 unforced errors.

Halep overcame a potentially sticky third round match as she dispatched Camila Giorgi in straight sets, 6-4 7-5.  Giorgi came out attacking as she always does, but Halep soaked up the pressure well.  There were 10 breaks of serve, but Halep held when it really mattered..  Giorgi’s serve continues to let her down and she hit 11 double faults in this match.  The Halep-Pennetta head-to-head is interesting… the pair have played three matches and Pennetta has won all three.  Their last match took place at the US Open in 2013 where Pennetta prevailed in straight sets, 6-2 7-6(3).  It is worth noting that Halep pulled out of their second match through injury.  I was really impressed with Pennetta and after going winless down under, she’s now 10-3 for the year.  Pennetta should not be underestimated in this match.  I nearly went for Pennetta, but I haven’t quite got the nerve to say she’s going to beat Halep, who is having a superb year herself.

Sloane Stephens and Belinda Bencic have made back-to-back fourth round appearances in Indian Wells and Miami, but one of them will go a step further in Miami with a quater-final place on the line.  Bencic had won just one WTA main draw match heading into Indian Wells, but she has turned her season around.  She has taken advantage of a favourable draw in Miami where her projected third round opponent, Eugenie Bouchard was beaten by Tatjana Maria.  In the second round, Bencic led by a set and a break but needed three sets to overcame the number 32 seed Casey Dellacqua, 6-2 4-6 6-2.  In the third round, she beat Maria in a tight two setter, 6-4 7-5.

Stephens had won just one more match than Bencic pre-Indian Wells, but now seems to be gathering momentum.  She produced a steady performance to beat Madison Keys in the second round, 6-4 6-2 and then earnt a first win over Johanna Larsson in the third round.  I saw the end of the first set and Stephens served it out with confidence.  Her partnership with Nick Saviano seems to be working a treat.  He’s great with her on the changeover and there has been a noticeable upturn in her results.  Stephens and Bencic have never played each other before on the WTA tour.  Sloane’s recent results have been impressive and it’s hard not to ignore improvements in her mentality this last month.  I’ll be cheering for Belinda, but I think Sloane will prevail.