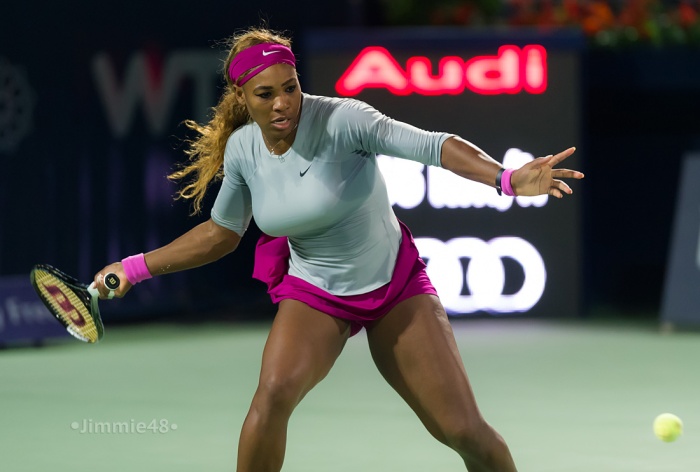 The 2015 BNP Paribas Open has had its fair share of upsets and surprises this year, but order has been restored somewhat with the first of the semi-finals, which will be played on Friday evening in the desert.  The number one seed, Serena Williams will play the number three seed, Simona Halep in what should be a fascinating match-up.  Halep booked her place in the last four with a 5-7 6-1 6-1 win over Carla Suarez Navarro.  It was Halep’s third three set win of the week with her match against Pliskova the only one that hasn’t gone the distance.  Against Suarez Navarro, Halep made a slow start going down a double break.  She recovered the two breaks, only to lose her serve again serving at *5-6 as Suarez Navarro stepped up the aggression on some well played points.

After losing the first game of the second set, Halep won the next eight games.  She finally found a groove on her backhand, particularly on the down-the-line shot and cut out the errors that had haunted her early on.  As the match moved into a third set, Suarez Navarro noticeably tried to put more on her shots, but to no avail.  She made a string of unforced errors and despite breaking Halep back at 2-0, she lost the last four games of the match as Halep grew in confidence towards the end.

Serena won her quarter-final match against Timea Bacsinszky in straight sets, 7-5 6-3.  It sounded like a good match and Timea continues to impress.  I was reading Timea’s press match conference after her win against Elina Svitolina and it’s fascinating to hear her story in so much detail.  I was going to do a post on it but time again has defeated me… click HERE to read the interview transcript in full.  Serena’s week began with an emotional first match back at Indian Wells against Monica Niculescu.  She has been a bit shaky at times, as her three set match with Sloane Stephens proved, but when she gets to this stage of a tournament, you know she is going to be pretty tough to beat.

Serena and Simona’s head-to-head is dominated by a pair of matches at the WTA Championships in Singapore at the end of 2014.  In their round robin match, Halep famously thrashed the world number one, 6-0 6-2.  However, the tables were turned in the final with Serena winning the WTA Championships with a 6-3 6-0 victory.  Both Serena and Simona didn’t play at their best in their respective losses so it would be great to see a match where both are playing at a high level at the same time.  I think the loss in Singapore for Serena struck a chord so the world number one will be up for this no matter how she is feeling physically or emotionally.  Halep has knuckled down since losing her quarter-final match against Ekaterina Makarova at the Australian Open and should bring a solid platform of confidence into this match.  Both players are on significant winning streaks; Serena is on 14 (in WTA matches), while Simona is up to 9 straight wins.  I’d back Serena to to maintain her the winning streak…

Note – This post has been amended to correct Serena’s winning streak.

Thanks for the all the comments this week.  Apologies, I haven’t had the chance to respond to many, but i’ve been reading them all.  It’s been nice to see a balance of support for players, particularly in the Halep-Pliskova preview.  I’m very intrigued to see which way the poll swings and hear people’s thoughts on this one.