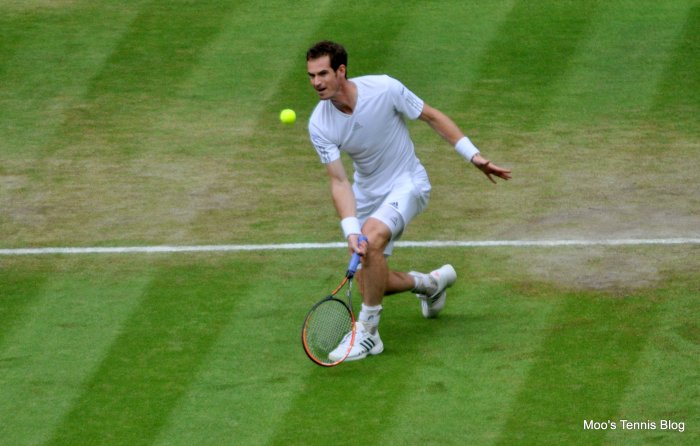 On a fantastic Sunday night in Melbourne, Nick Kyrgios and Andy Murray won their fourth round matches to set up a tantalising quarter-final that will see Kyrgios play his first match of the tournament on Rod Laver Arena.  Kyrgios came back from two sets down and saved a match point to defeat Andreas Seppi, 5-7 4-6 6-3 7-6(5) 8-6 in three hours and 34 minutes.  It was a match that produced a collection of gems – on the tennis front, Kyrgios’s forehand down-the-line to go up a break of serve in the decider was terrific.  On the non-tennis front, Kyrgios shouting at departing crowd members, “where are you going” and then to one gentleman in the crowd, “get off your f****** phone mate” was amusing.  Seppi smirking after hitting a winner and getting what almost sounded like boos was good too.  The dramatic match ended as only it could with a challenge on match point.

NK asking fans where they're going during his serve https://t.co/XiRTaulQ5u

Kyrgios’s level fluctated wildly between the five sets, but his poor attitude remained stable throughout the match.  At only 19, although it’s not great to see, I hope it’s something that will improve over time.  In the fourth set tiebreak, Seppi became passive and Kyrgios took advantage.  After charging into a 4-1 final set lead, Seppi came back and started to go for his shots a little more.  It looked like the momentum might be slipping for Kyrgios, but he did a pretty good job at wrestling it back and finishing off the match.  This is Kyrgios’s second Grand Slam quarter-final and he sent Hisense Arena into complete hysteria with this victory.

Andy Murray had an equally eventful evening, defeating Grigor Dimitrov in a high quality four setter.  There were plenty of ups and downs during the match; Dimitrov started superbly, but lost the first set.  Murray twice went up a break in the second set and even served for it, but Dimitrov won it on the tiebreak.  The fourth set will not be a happy memory for Dimitrov as he was unable to take advantage of a 5-2* lead and even a set point.  His racquet smash was IMMENSE.

5 all broken at love Current mood: less than enthused https://t.co/AMzkHLWBA1

Murray and Kyrgios will play each other for the second time on tour after Murray won in Toronto last year, 6-2 6-2.  I think there will be a great respect between the pair and obviously, a buzzing atmosphere.  Kyrgios seems to thrive in these kind of atmospheres, but against someone of Murray’s quality, I think this will be a huge step up from his four previous matches this fortnight.  I also think all these matches will catch up with him after coming into the tournament with an injury concern.  I’ve got a feeling that this could be somewhat of a damp squib… I really hope I am wrong.