In the night match on Rod Laver Arena, Maria Sharapova defeated Zarina Diyas, 6-1 6-1 to complete the line-up for the first batch of fourth round matches in the women’s draw.  Have I mentioned that Saturday’s line-up of women’s matches is awesome? I’m sorry, I know I sound like a broken record.  Hopefully it lives up to expectation and we get a couple of great matches.  Here’s a bumper part two preview.  I am glad the number of matches is always reducing… 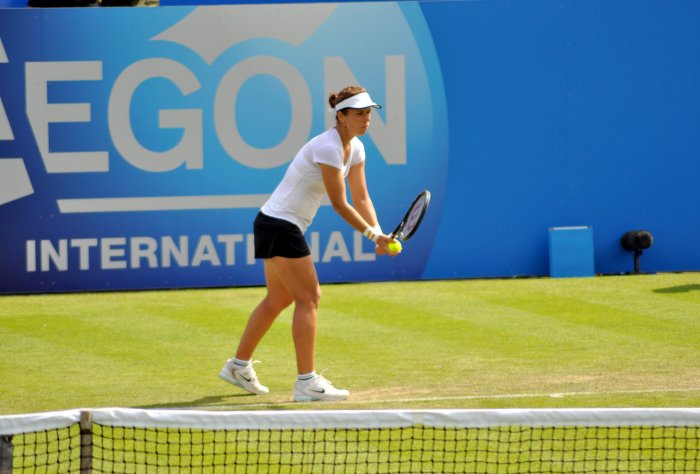 Agnieszka Radwanska has lost just four games in her first two matches at the Australian Open.  This has been a perfect start for the Pole, who has already racked up two bagels in victories over Kurumi Nara (6-3 6-0) and Johanna Larsson (6-0 6-1).  Her third round match will not be as straightforward as she goes up against Varvara Lepchenko.  The number three ranked American reached the semi-finals of Brisbane in the first week of the year and hasn’t dropped a set in Melbourne with wins over Vitalia Diatchenko (6-3 6-3) and Ajla Tomljanovic (6-1 7-6(1)).  Adding spice to this match is that Lepchenko has won their last two meetings, which both took place on hard courts.  Lepchenko won in Stanford, 6-3 3-6 6-4 and more impressively, in Seoul from a set down, 6-7(4) 6-2 6-2.  Lepchenko has all the shots in her repertoire, but a mixture of nerves and concentration issues have always held her back.  Radwanska’s draw is about to get a whole lot tougher in the next few rounds and this will be a solid indicator to see where her level is.  Based on Aga’s recent form and at Grand Slam level, I think she will come through. 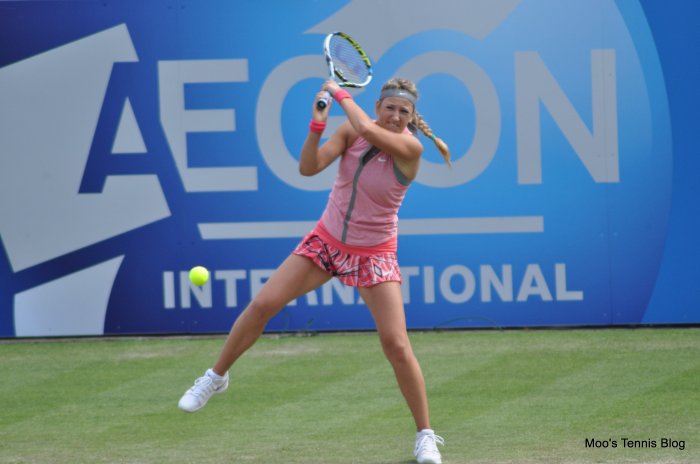 In the most anticipated match-up of the tournament so far, Victoria Azarenka produced her best performance in quite sometime to defeat Caroline Wozniacki, 6-4 6-2.  Stuck at work, I listened to this match on the radio and it sounded a great for a set and a half.  I’m disappointed it didn’t get Rod Laver Arena and even more so, that there were empty seats on Margaret Court Arena.  I felt like this match was a big deal, but this was not replicated with the coverage in Australia.  Azarenka nearly let slip a double break lead in the first set, but served out both sets as she dominated throughout the one hour and 38 minute contest.  After watching some brief highlights and looking at the stats, what was most encouraging about Azarenka’s performance was her willingness to close points off at the net.  Vika won 21 out of 26 points at the net and hit 31 winners to 28 unforced errors.  I was disappointed for Woz, but also pleased to see Vika back in the mix.  Her reaction at the end was cute.

Azarenka’s next match is against Barbora Zahlavova Strycova, who kept up her impressive recent form with a straight sets win over Kai-Chen Chang, 6-1 7-5 in the second round.  BZS has become a really dangerous player and started to become dare I say, reliable in beating players ranked below her.  She’s still an emotional character on court, but remains fascinating to watch.  Talking of fascinating, this match promises to be just that.  Azarenka leads the head-to-head 3-0 and their last match was at the 2014 Australian Open.  BZS was at number 84 in the rankings this time last year representing the improvements she has made.  Azarenka was great against Wozniacki, but i’m not sure she’s a title contender for me due to the lack of matches.  Her route to the final would be absolutely brutal and that includes this match with BZS, which I think will end up being tougher than her second rounder…

The world number one, Serena Williams had to save three set points before sealing the opening set of her second round match against Vera Zvonareva.  After facing a 3-5 first set deficit, Serena didn’t drop another game as she rolled through the second set and posted a 7-5 6-0 victory.  Serena’s first seeded opponent this fortnight is Elina Svitolina.  In a rollercoaster second rounder, Svitolina came back from a hefty second set deficit to beat Nicole Gibbs in straight sets, 7-6(3) 7-6(6).  Poor Nicole has had a rough few weeks after being double bagelled by Karolina Pliskova in Sydney last week.

Svitolina, who reached the semi-finals of Brisbane, has been steadily improving on tour.  She enjoyed her best results in Cincy and Wuhan last year where she reached the quarter-finals and semi-finals respectively, and had nine top 30 wins in 2014.  Svitolina is a very consistent performer although i’m not yet convinced whether she has the type of game that will threaten the top ten players on a regular basis. Against a good Serena, Svitolina will struggle, but against a bad Serena, Svitolina will have chances.  In this match-up, it really does depend on which Serena will take to the court.

I got up on Thursday just in time for the Alize Cornet show.  She was unable to serve out her second round match against Denisa Allertova, but regained her composure (kind of) to finish off her Czech opponent in three sets, 6-4 6-7(2) 6-2.  Cornet has a habit of playing matches like this where she goes on mental walkabouts, but often comes back to get the job finished in the end.  If you’re a fan of Cornet drama (SURELY EVERYONE), then @ roobynVC is a must follow on Twitter for Cornet GIFs.

When it's your birthday and you find out that no one bought you cake https://t.co/jwjwvx6Xdj

Cornet’s next match is against the defending finalist, Dominika Cibulkova.  Domi rolled past Tsvetana Pironkova, 6-2 6-0 to record her eight victory over the Sydney GOAT.  Cibulkova went 1-2 (W-L record) through Brisbane and Sydney, coming up against in-form players in Madison Keys and Jarmila Gajdosova.  Her form has been OK this year, but she hasn’t had much luck with the draws.  It was always going to be a steep ask to defend the final points and to have already reached the third round is respectable.  Cibulkova has a 3-0 head-to-head record against Cornet so fourth round is definitely up for grabs.  In their last match in the third round of Miami, Cibulkova edged Cornet, 7-6(6) 6-4 in an absorbing match that narrowly missed out on a place in my top 20 matches of 2014.  I think this will be another entertaining match for all the right and wrong reasons…

Prediction: Cibulkova d. Cornet in 3 sets (if this ain’t dramatic, I want my money back)

Garbine Muguruza d. Timea Bacsinszky in 3 sets: Muguruza came through a crazy-scoreline-of-a-match against Hantuchova, 6-1 1-6 6-0, meanwhile Bacsinszky backed up her upset of Jankovic with a three set win over Tatishvili.  I’d banker on another three setter for the pair.  I’d go for Muguruza, but equally, wouldn’t be surprised if Bacsinszky keeps up her good form.

Coco Vandeweghe d. Madison Brengle in 2 sets: Vandeweghe was reportedly brilliant against Stosur, meanwhile Brengle has been playing really well too and backed up both her final appearance in Hobart and victory over Petkovic in the first round.  Coco will be tough to stop.