Here is the first ATP preview of 2015! Work has been busy so far this month and I will drop the ATP coverage when i’m struggling to keep up.  I’ll always endeavour to preview the Grand Slams and Masters 1000 events.  Moo’s Tennis Blog will be following the tournament with regular posts on a daily basis.  You can follow me on Twitter (@MooTennisBlog) and on Facebook (Moo’s Tennis Blog page).  I’d love to hear your thoughts on the draw and even more so for a Grand Slam.  If you agree, if you disagree, then make yourself heard… and please vote in the poll 😀

Fantasy tennis games: Thanks to everyone who has joined so far! You can join the Moo’s Tennis Blog leagues for the TFF DreamTeam (details here) and Racquet Rally (link HERE and select Moo’s Tennis Blog from the dropdown list) for some friendly competition during the Australian Open!

Novak Djokovic headlines the mens draw and opens against Chennai finalist and qualifier, Aljaz Bedene.  Djokovic had won three consecutive Australian Opens in 2011, 2012 and 2013, but was sensationally ousted in the quarter-finals last year by Stan Wawrinka.  In an almost carbon copy (except the result), Wawrinka prevailed 9-7 in the deciding set of what was another stonking match between the pair in Melbourne.  Djokovic’s pre-tournament preparations featured a quarter-final loss to Ivo Karlovic in Doha.  Despite this, Djokovic heads into the Australian Open as the bookmakers favourite to win his eight Grand Slam title.  Up to the quarter-finals, Djokovic’s draw looks pretty favourable.  The one match in this section that produced a raised eyebrow was the number 13 seed, Roberto Bautista Agut up against Dom Thiem.  Bautista Agut reached the semi-finals of Chennai where he was unable to take advantage of four match points against Bedene.  He then pulled out of Auckland with an injury.  Thiem started the year with a loss to Jan-Lennard Struff in three sets.  I’m a fan of Thiem and although he has yet to win a match in 2015, he is talented enough to take advantage if Bautista Agut is still not 100%.

The highlight of the first quarter is a duo of matches that features Juan Martin del Potro against Jerzy Janowicz and Gael Monfils playing Lucas Pouille.  DelPo made his long awaited comeback in Sydney; he won two matches against Sergiy Stakhovsky (6-3 7-6) and Fabio Fognini (4-6 6-2 6-2) before falling in the quarters to Mikhail Kukushkin.  It was an encouraging start for the big man, who had played down his chances pre-tournament.  It will be interesting to see how his wrist copes in best of five set matches.  I’d predict that DelPo will get through the first round, but anything more would be a bonus.  Monfils against Pouille is another engaging first rounder.  Pouille reached the semi-finals of Auckland in a draw that saw just one seed reach the quarter-finals. meanwhile Monfils hasn’t played any matches this year.  I’d fancy a Monfils v Del Potro second round match, which would be AWESOME.

At the bottom of the first quarter is Milos Raonic.  The number eight seed performed well in Brisbane, outhitting Roger Federer for a time, but coming up short in a three set finale.  Raonic has proven his consistency over the last year or two and with a draw like his, it would be disappointing if he didn’t make at least the quarters.

The defending champion, Stan Wawrinka has a dream of a draw.  Last year, Wawrinka upset Novak Djokovic (in the quarter-finals) and Rafael Nadal (in the final) to win his first Grand Slam title.  Although it would be a huge surprise to see Wawrinka defend his title, he should still be regarded as a contender.  Stanley has found himself in a particularly light section of the draw featuring Pablo Cuevas, Alexandr Dolgopolov and Fabio Fognini.  Fognini lost all his singles matches at the Hopman Cup and the first match he played in Sydney against DelPo.  Dolgopolov is troubled with a knee injury, meanwhile Cuevas, who won four Challenger titles and two ATP 250 events on clay in a magnificent 2014 campaign, is unlikely to troubles the likes of Stan on hard courts.  If anyone is going to upset the apple cart of seeds just discussed, then the second round match between Sam Querrey and Vasek Pospisil may be the one to watch.

Kei Nishikori’s eighth of the draw looks equally dreamy for the first few rounds.  On paper, Nicolas Almagro looks like a dangerous first round match.  However, the Spaniard missed the second half of 2014 with a foot injury and has very little match practice after a first round exit in Sydney.  For British fans, of note is Kyle Edmund, who plays in the first round against Steve Johnson.  Edmund came through three rounds of qualifying, beating Dane Propoggia (great name) in three sets, 6-7(3) 6-4 9-7 in the final round.  The one ray of sunshine in this otherwise dull section of the draw is a potential fourth round match between Nishikori and David Ferrer.  The Spaniard, who missed out on a top eight seeding (which feels very strange), should not be completely discounted after winning Doha, beating Tomas Berdych in the final.  I’m hoping for Ferrer against Nishikori in the fourth round because they always deliver absorbing and competitive matches.  Their last four matches have all gone three sets so a match on the Grand Slam stage would likely be exhausting for both players and fans.  For the record, I really like Kei’s chances at the Australian Open.

Tomas Berdych‘s eighth of the draw is ablaze with Australians.  Bernard Tomic, Thanasi Kokkinakis, Sam Groth and John Millman are all in this section and i’d fancy at least one of them to have a deep run.  Berdych’s first couple of matches don’t possess any upset alerts with Alejandro Falla his first round opponent.  A first round match worth noting features Victor Troicki and Jiri Vesely, who won titles this week in Sydney and Auckland respectively and as qualifiers.  Both have a quick turnaround, but the winner will have bundles of confidence going forward.  The number 11 seed, Ernests Gulbis, has drawn Kokkinakis in the first round.  Thanasi is a really talented up-and-comer, who looked very impressive in a straight sets win over Julien Benneteau in Brisbane.  I’d definitely take Kokkinakis to beat Gulbis.  Tomic is also one to watch; he plays Tobias Kamke in the first round and is in the same mini-section as Philipp Kohlschreiber, who he comfortably defeated in Sydney, 6-3 6-4.  Tomic seems to have settled and become focussed on his tennis.  I’d fancy an Aussie player to reach the quarters, either Tomic or Kokkinakis.

Rafael Nadal has yet to find his mojo after injuries and a dodgy appendix brought his 2014 season to a halt.  Nadal’s first competitive match of the 2015 season resulted in a loss to Michael Berrer, who failed to qualify for the Australian Open.  His draw in Melbourne could give him enough time to find some form.  In the first round, Nadal takes on Mikhail Youzhny.  The Russian player, who dropped 32 places in the rankings during 2014, has four wins to his name against Rafa although he hasn’t beaten the world number three since 2008.  Youzhny’s first round loss in Doha to the world ranked 171, Nikoloz Basilashvili would suggest he’s not in the form to mount an upset.  The highest seeds in Nadal’s eighth are Kevin Anderson and Richard Gasquet; both are solid players on their day, but neither would seem to have the mental strength to push even a below-par Rafa.  Perhaps the one player with some belief would be Lukas Rosol, who could play Nadal in the third round.  I’m surprised to see Rosol in the draw though because I had read that he wasn’t heading to Australia after recently becoming a father. 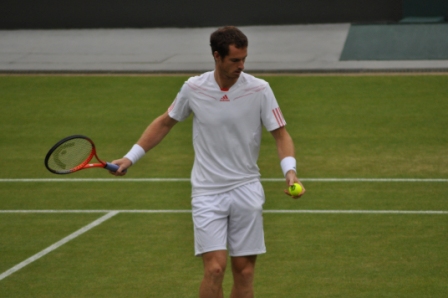 The most captivating of the four quarters is the final one, which hosts Roger Federer and Andy Murray.  A Federer v Murray quarter-final would be great, but there are some names in this section who will give them a work-out before that could become an eventuality.  Murray opens against the qualifier, Yuki Bhambri.  The world ranked 314, who won the Australian Open juniors title in 2009, has qualified for a Grand Slam main draw for the first time in his career.  The first seed that Murray could meet is Martin Klizan, in what would be a first career match-up.  Klizan is pretty erratic, but can catch a hot streak which would make him a an opponent to be wary of, assuming he can actually win his first two rounds which is never a given.

Murray’s fourth round opponent is projected to be Grigor Dimitrov.  Dimitrov’s first round match is against Dustin Brown, which should be an absolute ball.  Brown and Dimitrov are two of the most entertaining players to watch on tour and if I was lucky enough to be in Melbourne on Monday, that would be the first match I would head for! Dimitrov’s first potential seed in the draw is David Goffin.  Ranked at number 22 in the world, Goffin had an incredible rise up the rankings during the second half of 2014, moving up 84 places in just 15 weeks.  He started the year with a semi-final loss in Chennai to Stan Wawrinka and a second round loss in Sydney to Simone Bolelli.  Goffin and Dimitrov’s only previous match took place at the US Open where Dimitrov won in four sets after being dropped a first set bagel.  I’m a little bit disappointed they have landed in such a steep section of the draw as both were potential quarter-finalists in my eyes.

Roger Federer bookends the draw and comes into the tournament with both fitness and form.  Federer defeated Milos Raonic in a three set final in Brisbane and overcame a testing opening match of 2015 against John Millman where he was forced to battle back from a set and a break down.  In Melbourne, Federer takes on Yen-Hsun Lu in the first round.  The first seed Federer could meet is Jeremy Chardy; all three of their previous matches have gone the distance and Chardy won in Rome last year.  Chardy’s first rounder is against 18-year-old and world number 90, Borna Coric.  Also in Federer’s eighth of the draw and worth a mention are Tommy Robredo, Ivo Karlovic and Nick Kyrgios.  Robredo hasn’t played a competitive match in 2015 after pulling out of the event in Auckland.  Similarly, Kyrgios has been troubled with injuries, a back complaint that forced him out of Brisbane.  If Kyrgios and Robredo are both still suffering with injuries, the number 23 seed, Karlovic could have a reasonably clean passage to the fourth round.