The Beijing quarter-finals are all set and in one case, we already know a semi-finalist.  Ana Ivanovic has advanced to the last four after Simona Halep pulled out of the tournament.  There were some unhappy Petkovic fans on Twitter as the German player had pushed Halep to a third set tiebreak earlier today before losing.  I also remember that Halep did this in Rome, beating Madison Keys in three sets before pulling out of her next match.  It’s an unfortunate situation and I am not really sure where I weigh in on it.  All four of my pre-tournament semi-finalists are still in… therefore expect all four to go out on Friday! 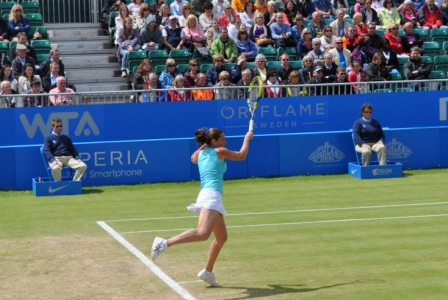 It’s not often this year that I have got to use a Roberta Vinci picture.  During the 2013 season, Vinci was knocking on the door of the world’s top ten.  However 2014 has not been kind to her as she finds herself all the way down at number 44 in the rankings.  Vinci didn’t get her first singles win of the year until Indian Wells and has lost in the first round of 16 tournaments this year.  There have been some highlights along the way, notably reaching back-to-back finals in Bucharest and Istanbul after Wimbledon.  The lows have unfortunately, overshadowed the highs.  In Beijing, Vinci has had arguably her best week of the entire season.  In reaching the quarters, she has defeated Yaroslava Shvedova, Agnieszka Radwanska and Ekaterina Makarova.  In the third round, she edged an odd match with Makarova, winning through, 6-1 0-6 7-5.

Vinci now takes on Petra Kvitova, who didn’t have to take to the court on Thursday.  It was an ideal situation for Petra, who was in action in Wuhan last week.  It was a less than ideal situation for everyone else though as Venus Williams pulled out of her third round match with Petra due to a viral illness… I was soo looking forward to this match.  Vinci actually has a good record against Kvitova, winning two matches in 2013, both on clay in Katowice (indoor clay) and Fed Cup action.  In their most recent match earlier this year, which also came in Fed Cup action, Kvitova won 6-3 7-5.  These courts in Beijing are fast and Petra looks to be in a really great place with her game right now.  Vinci can be a stunning player on her day, but I think Kvitova will have enough left in the tank to reach the semi-finals. 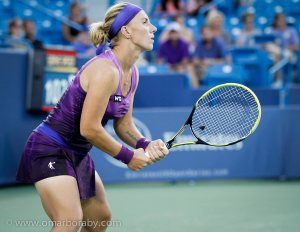 For the second consecutive week, Maria Sharapova and Svetlana Kuznetsova will play each other.  There have been quite a few repeat match-ups this week in Beijing with Kuznetsova already having played Kurumi Nara in the second round.  In the third round, Kuznetsova came from a set down to defeat Angelique Kerber, 2-6 6-4 6-3.  I watched chunks of the second set and I thought Kuznetsova was playing extremely well.  She had a little wobble serving out the second set as Svetlana normally does, but this was an impressive victory.

Serena Williams d. Sam Stosur in 2 tight sets… Again, it is another who knows?! Serena had strapping on her knee during her three set win over Safarova and also, I read on Twitter she didn’t give a press conference after the match.  If Serena takes to the court, then I think she will beat Sam, but I could see Serena pulling out before the match begins.