I always like to get my pre-tournament preview out before the main draw kicks off, but that has resulted in a rather slapdash effort as the main draw for Beijing kicks off on Saturday!  I don’t understand why all these tournaments have to overlap and why they couldn’t have a couple of days off between each one.  Beijing is the final Premier Mandatory tournament of the season and everyone is here.  Let’s take a look at the draw…

Serena Williams was forced to retire from her first match in Wuhan against Alize Cornet due to a viral illness.  There was quite a lot of it going around in Wuhan with several players pulling out for the same reason.  There were pictures of Serena arriving in Beijing by train, but we don’t know whether she is going to be 100% to play Beijing.  Her first match of the week will be against a qualifier and the first seed she could meet is Lucie Safarova.  Lucie was another one of the players who had the viral illness.  After losing a tight three setter to Sabine Lisicki in Wuhan, Safarova has another challenging opener against a big hitter in Camila Giorgi.

Caroline Wozniacki has had a heavy schedule over the past two months and in her semi-final with Eugenie Bouchard in Wuhan, it looked like it was catching up with her.  She had a MTO during the match and was struggling with a hamstring injury; however reports after the match indicated it wasn’t serious so I would expect we will see her in Beijing.  Caroline has a first round bye and will play the winner of a first round match between Sam Stosur and Francesca Schiavone.  This will be the 13th time that Sam and Fran have played each other, and Sam has won three of their last four matches.  Jelena Jankovic is also in this section and takes on Alize Cornet in the pick of the first round matches.  Let’s hope it is a beautiful match full of beautiful drama.

Petra Kvitova has had a superb week in Wuhan, reaching the final and looking very confident on court.  Petra’s first match of the week in Beijing will be against Zhang Kai-Ling or Peng Shuai.  There is a possibility that Petra could meet Venus Williams in the third round.  I am a huge, huge fan of Petra-Venus matches.  All five matches they have played have gone three sets and their last match at Wimbledon earlier this year was an absolute delight to watch.  Before we can get excited about this match, Venus opens against Heather Watson and more significantly, could meet Caroline Garcia in the second round.  Garcia defeated Williams in an absorbing first rounder in Wuhan, which Garcia won, saving a match point and prevailing in a third set tiebreak.

Another player to face the wrath of Garcia in Wuhan was Agnieszka Radwanska.  Garcia defeated Aga in another third set tiebreak.  Radwanska actually played a pretty good match despite the loss.  Radwanska’s first match of the week will be against Coco Vandeweghe; the American is the kind of player who has the game to dismantle Radwanska, but equally, the kind of game that could become bamboozled by Radwanska’s trickery.  Another cracking first rounder between two big hitters, Ekaterina Makarova and Garbine Muguruza will be one to watch.  The winner could meet the in-form, Karolina Pliskova in the second round.  I’d fancy one of the trio to take out Radwanska and go deeper in the draw. 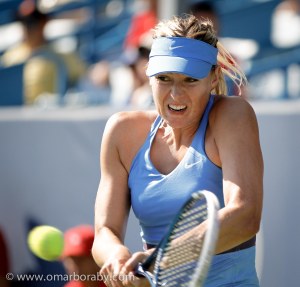 Angelique Kerber has had some tough losses to deal with in the last month.  She suffered an early exit in the third round to Belinda Bencic at the US Open and in her last two tournaments, has lost a match where she served for one of the sets.  As her chances for Singapore sail into the sunset, Kerber needs a huge result in Beijing.  If she defeats Casey Dellacqua in the first round, Kerber could face a Wuhan rematch with Zarina Diyas in the second round.  Diyas opens against Klara Koukalova, another match that played out in Wuhan.  Sara Errani is Kerber’s projected third round opponent; since reaching the quarter-finals of the US Open, Errani has suffered straight set losses to Marina Erakovic and Alison Riske in Tokyo and Wuhan respectively.  If there is anyone likely to snap up Errani’s section, it could be Svetlana Kuznetsova, who faces Daniela Hantuchova in the first round.  Kuznetsova leads the H2H with Dani, 8-4 and has won their last two matches.

Maria Sharapova was knocked out by Timea Bacsinszky in Wuhan in one of the more surprising losses of the 2014 season.  Maria opens against Kaia Kanepi in Beijing and could meet Wuhan semi-finalist, Elina Svitolina in the second round.  It’s a bit random to see a bye in the middle of the draw!  Sharapova’s form since winning Roland Garros has been below-par although her fighting spirit has gained her some respectable wins.  Kanepi can be a tough opponent, but she has never beaten Sharapova in three previous matches.

Eugenie Bouchard enjoyed her best week on tour since Wimbledon with a final appearance in Wuhan.  Her draw in Beijing looks tough so the extra boost of confidence will be needed to see her pick up any victories next week.  Bouchard will play Sabine Lisicki or Xu Shilin in the second round.  Lisicki has had some excellent results of late, winning Hong Kong and defeating Safarova in the first round of Wuhan.  However, she remains erratic and did blow a 5-0 first set lead against Svitolina in her second rounder in Wuhan.  A potential third rounder between Bouchard and Ana Ivanovic looms.  Ivanovic has never beaten Bouchard before so that would be a very interesting match-up.  Ivanovic will have to defeat a qualifier and then Bojana Jovanovski or Romina Oprandi to reach the third round.  Assuming she has recovered from the injury that forced her out of Wuhan, I like Ivanovic’s chances in Beijing.  Her run  to the title in Tokyo was superb.

It’s fair to say Simona Halep‘s form has dipped in the last month or two.  Since losing to Maria Sharapova in the quarter-finals of Cincy, Halep has compiled a disappointing 2-3 W-L record.  She lost in her first match in Wuhan to Garbine Muguruza.  Her draw in Beijing is much more workable as she opens against Barbora Zahlavova Strycova.  The first seed she could meet is Andrea Petkovic.  This section also features an all-American first rounder between Madison Keys and Alison Riske.  Since the grass court season, Keys hasn’t won more than one match at any of the six tournaments she has played.  I think Keys is due a big result soon, but right now, her inconsistency is a concern.

Making finals predictions has become somewhat obsolete in 2014.  Serena is 50/50, but if she can get through her first couple of matches, then she will be the favourite to win.  I would have been tempted NOT to have picked her as my champion if one or two of the dangerous floaters had landed in her section.  Like most tournaments this year, I expect upsets so i’ll be following the tournament through next week with match previews each day when my original draw crashes and burns.  I have put a prediction for all the first round matches in Beijing playing on Saturday.  My full predictions will be posted once the qualifiers have been placed.