The third quarter of the women’s draw has seen the two top eight seeds, Agnieszka Radwanska and Angelique Kerber, both go out.  However, four solid players remain and personally, i’m a fan of all four so i’ll be happy whoever comes through.  Jelena Jankovic will be the favourite, but I could stake a claim also for the other three on reaching the semi-finals.  This should be fun…

Oh boy.  I am really excited about this match.  Belinda Bencic is continuing to turn heads as she reached the last 16 of a Grand Slam for the first time in her career.  Bencic came from 5-2 down in the second set to record a 6-1 7-5 victory over Angelique Kerber.  The German player had several set points and sounded incredibly disappointed about this loss on her FB account.  This was a tremendous performance from Bencic, who served out the match in style.  Her game is very solid, but it is her mental game that sets her apart from all the young players coming through right now.  I wrote in my preview on Friday that I have totally bought into the Belinda bandwagon, but I really didn’t think she was ready yet to produce such a big win on the big stage.

Jelena Jankovic had been reasonably quiet of late.  She has taken advantage of her draw opening up like a dream.  In the third round, she was projected to meet Sloane Stephens.  Instead she played Sloane’s conqueror, Johanna Larsson, who she rolled past with a commanding 6-1 6-0 victory in the first match on Ashe.  By all accounts, Larsson had a really bad day at the office.  I think this is going to be a really entertaining match between JJ and BB.  I’m going for JJ, but who knows, this tournament has already thrown up some surprises in the bottom half of the women’s draw and Bencic is already a supreme competitor. 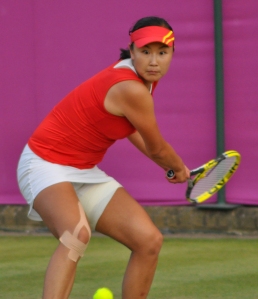 Watching Lucie Safarova‘s last two matches have nearly destroyed me.  In the second round, Safarova needed three sets to get past Saisai Zheng in a horrid match.  Her third round match against Alize Cornet was a much better match although for Lucie fans, it was a tough watch.  Safarova had a match point in the second set on Alize’s serve before the Frenchwoman held serve and then eased through the second set tiebreak.  In the deciding set, Safarova regrouped well to lead *5-2… which quickly became *5-4.  Safarova was evidently nervous and served a double fault on her second match point.  Again, she managed to regroup to secure her first ever appearance in the last 16 of the US Open and continue her excellent record at the Grand Slams this year.

Safarova takes on Peng Shuai in the fourth round, who is bidding for her first ever Grand Slam quarter-final appearance.  Peng is 0-5 in fourth round matches at the Grand Slams.  The Chinese player, who topped the world rankings in doubles earlier this year, had a superb win over Agnieszka Radwanska in the second round.  She backed that up with another straight sets win over Roberta Vinci.  Serving smart and hitting aggressively, Peng is playing some excellent tennis right now.

Safarova leads the head-to-head 4-1 and has won their last four matches.  They played earlier in Doha this year where Lucie won, 6-2 5-7 6-4.  Both have the tendency to get nervous and I still remember vividly (unfortunately) Peng’s horror match with an injured Flavia Pennetta at the US Open in 2011.  I really like both players, but I believe that Lucie’s experiences at Wimbledon and her last two wins, both really challenging matches, will give her the confidence and edge to come through this one.