A random thank you to everyone who has been following the blog this week.  The poll for yesterday’s quarter-final between Maria Sharapova and Simona Halep was the most popular poll ever on Moo’s Tennis Blog with 68% going for Halep to win.  It sounded like another great contest between the pair and it has firmly planted this rivalry as one of the best on tour in 2014.  I’d really love to see Simona get a win over Maria before the end of this year.  She’s come close in their last three matches.  Cincy has delivered up two potentially great semi-finals.  Here are my thoughts…

All the photos from Cincy this week on Moo’s Tennis Blog are thanks to Omar Boraby.  You can check out Omar’s official website HERE and follow him @PhotographyOmar on Twitter.

In the first of the WTA semi-finals starting at 6pm UK time, Serena Williams and Caroline Wozniacki will meet for the second time in as many weeks.  Serena defeated Caroline in an entertaining quarter-final in Montreal last week, 4-6 7-5 7-5.  You can read my full recap of that match HERE.  Wozniacki has really transformed her season in the last month or two.  In Cincy, she has beaten Angelique Kerber and Agnieszka Radwanska back-to-back in straight sets.  It was back in 2011 when Wozniacki last registered a victory over Radwanska.  I was out during the Caro-Aga match, but this is the great thing about Twitter…

@MooTennisBlog It was a fun match, good points played from both. 2nd set tiebreak was particularly good.

@MooTennisBlog It was a typical Aga-Caro match. There were lots of long rallies but Aga made too many unforced errors while Caro was solid.

@MooTennisBlog yes, good quality from both, Aga was very attacking, just a few too many misses on the really big points

Serena Williams continued her rather ominous route through the draw with a 6-1 6-3 victory over Jelena Jankovic.  JJ broke to lead *2-1 in the second set, but forfeited the break in the next game and then soon after, the match.  I thought Serena would be exhausted heading into Cincy; she said after her win over Wozniacki in Montreal that she was tired, but the three days in between the tournaments and a series of comfortable victories have firmly cemented her as the favourite to win this tournament.  I love the way Wozniacki is playing right now and I believe this could be Serena’s toughest match of the entire week.  Head says Serena, heart says Caroline… this time round, i’m going with my head. 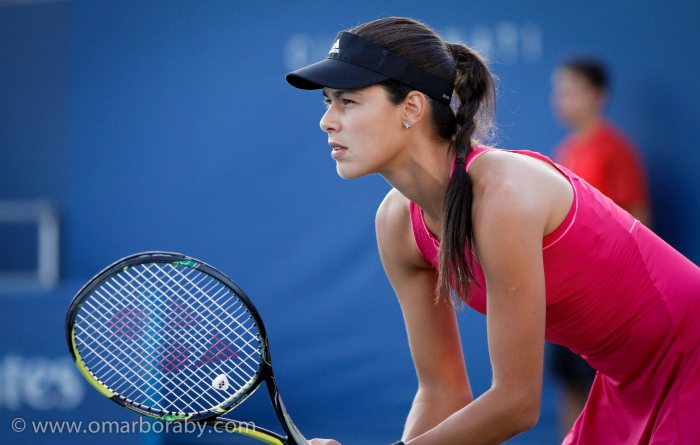 Ana Ivanovic has kept under the radar this week in Cincy with a series of efficient displays that have launched her into the final four.  In the quarter-finals, she beat Elina Svitolina, 6-2 6-3.  Her toughest match of the week came against Svetlana Kuznetsova in the third round, which was the only set she has dropped all week.  In the semi-finals, she will reignite her rivalry with Maria Sharapova.  As mentioned above, the majority were backing Simona Halep to beat Maria Sharapova.  However writing off Sharapova is still a dangerous thing to do as Maria proved, coming from a set and a break down to beat Halep, 3-6 6-4 6-4.  Scrappy Sharapova was on show at the start, but from tweets I read, it sounded like Halep became too passive in the deciding set and Sharapova’s willingness to be aggressive and ability to land enough balls in court paid dividends. 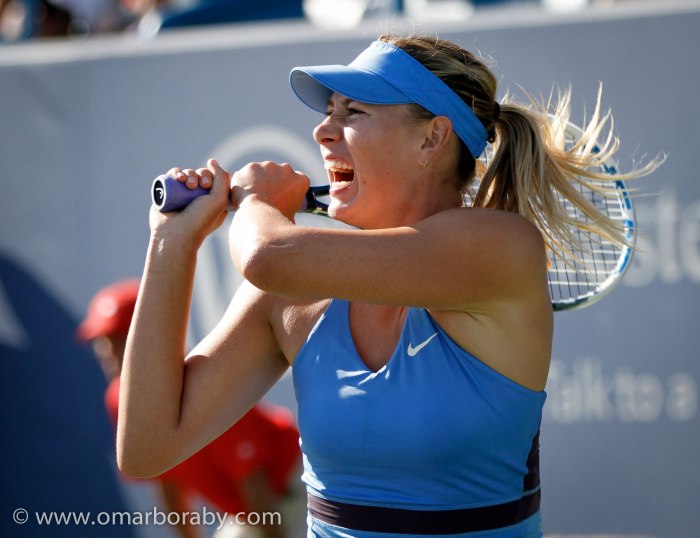 Sharapova leads the H2H 8-3; the pair have played two matches this year, both on clay.  Sharapova won an entertaining final in Stuttgart, 3-6 6-4 6-1.  Ivanovic started the match superbly well, but was pegged back by Sharapova in rather dominant fashion.  You can read my full recap of that match HERE.  In Rome, Ivanovic turned the tables with a huge win, her first in seven matches against the Russian player.  It is worth noting that Sharapova was coming off Madrid so she was not 100% for that encounter in Rome.

Does Ivanovic stand much of a chance? Oh yes! This has been a terrific season for Ana and she has proven not just in one or two tournaments, but throughout the entire year that she is a consistent and dangerous threat to the top players.  Her mental game had been an issue for many years, but she’s calmed down a little (there are definitelty less ajdes compared to what she used to do) and has been much tougher mentally on court.  However as I big up Ana, it’s worth noting that Sharapova is still my tip for this match!  She’s been winning ugly all week and I think she is mightily determined to go all the way in Cincy.