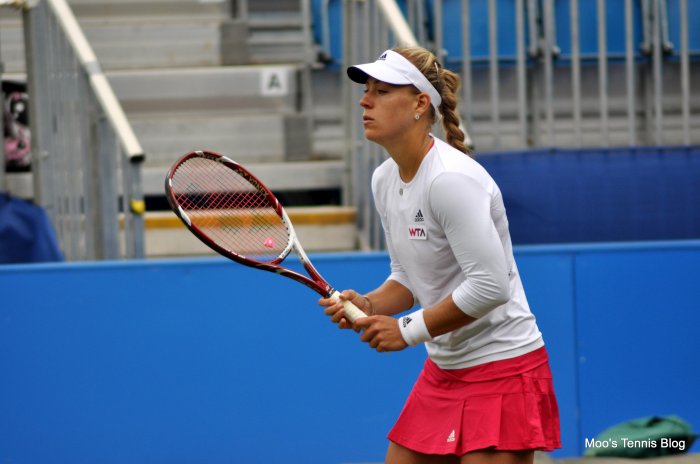 Angelique Kerber produced the best performance of her entire career to knock out the 2014 Roland Garros Champion, Maria Sharapova, 7-6(4) 4-6 6-4 in two hours and 37 minutes of quite breathtaking tennis.  There is no doubt that this was the best match of the tournament and it’s a pretty solid contender for WTA match of the year as well.

MATCH OF THE YEAR?

I thought about putting an exclamation point on my last tweet but then I was like am I being irrational?? I don't know?? But this is amazing

Kerber had one of her best weeks of the year in Eastbourne.  She played a tremendous final against Madison Keys, but came up second best.  I feel Angelique has come up second best in so many matches, which makes this win so rewarding.  After two magnificent sets of absorbing and brutal tennis, Sharapova levelled up the scoreline.  To be honest, I thought Maria had it.  In many of these tight matches in 2014, Kerber has been too defensive.  This time round, she was willing to go for her shots and was really positive.

As Kerber served for the match at *5-3, Sharapova did what she does best.  She stepped it up.  Kerber came back again at 5-4* down in the third set, earning three match points.  Each time, Sharapova did what she does best.  After six match points gone and Sharapova bringing up a couple of game points, I was starting to fear for Kerber’s chances.  After another ridiculous rally, the best one of the match, tournament and universe, Kerber carved open her seventh match point and this time TOOK IT.

Kerber defended immaculately all match and really proved what a fantastic game she has for the grass.  She soaked up Sharapova’s power, but was also able to dish it back, using some delicious angles.  The stats were favourable to both.  Kerber hit 27 winners to 11 unforced errors, meanwhile Sharapova finished with 57 winners to 49 unforced errors.  How Kerber hit just ELEVEN errors in over two and a half hours is staggering.  Some players can tally up that amount within ten minutes!

There was a lot of support for Kerber in this match and many congrats to those who tipped this upset.  In yesterday’s poll, 27%  correctly predicted that Kerber would beat Sharapova.  Kerber goes on to face Eugenie Bouchard in the quarter-finals.  The first of the womens quarter-finals is already complete and the winner was Lucie Safarova, who defeated Ekaterina Makarova, 6-3 6-1.  The womens draw is completely wide open and I can’t wait to see how things will pan out.  I’m too excited right now, I think I need to sit in a darkened room…