Serena Williams was knocked out of the 2014 Wimbledon Championships in three sets by Alize Cornet, 1-6 6-3 6-4.  It was a shocking loss for a number of reasons: Serena had taken the first set in style, 6-1 and looked in complete control.  This was Alize’s second straight win over Serena and it was so befuddling, because I wrote in the preview yesterday how Serena is pretty solid at exacting revenge.  She looked lost in the decider and Cornet, who let’s make clear, played a GREAT match, was dominating the majority of rallies in the third set.  Serena turned it on to get one of the breaks back, but then threw in an astonishing final game.  Allez Alize!

This is the big post on the year… the Magic Monday preview!  Unfortunately the rain means there are only seven matches to preview with Lisicki v Ivanovic (Sabine leading 6-4 1-1*) and Keys v Shvedova (Yaroslava leading 7-6 6-6) to still finish.  We don’t know yet what will happen with the schedule so somehow, i’ll try and get a preview for that 4th round match in!

Maria Sharapova faced a tough third rounder against grass-court-loving, Alison Riske.  She passed the challenge with supreme ease, rallying from 1-3 down in the first set to win the next 11 games and post a 6-3 6-0 victory.  The match ran away from Alison in the second set as Maria used the wise tactic of aiming for the Riske forehand.  Alison tried to mix it up by coming into the net, but was picked off every time by Maria.  Sharapova now faces her toughest match of the week against Angelique Kerber in the last 16.

The Eastbourne finalist was in a spot of bother after her losing the first set of her third round match on court 16 to Kirsten Flipkens.  Kerber responded valiantly to take the next two sets and move into the last 16 with a 3-6 6-3 6-2 win.  Sharapova leads the H2H 4-1 with Kerber’s win coming indoors in Paris back in 2012.  Their last match on the clay courts of Stuttgart was a fun one, which Sharapova won, 6-3 2-6 7-5.  I think Kerber on grass, playing at her peak level, has a real shot in this one.  However, you cannot ignore the form that Maria has displayed through her first three rounds.  I’m cheering for Angie, but Maria is the favourite to win this match and perhaps, the whole tournament… 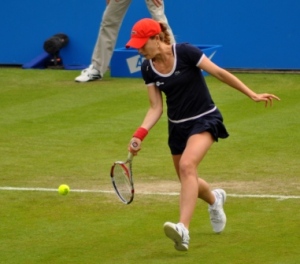 Many fans were eyeing up Serena Williams v Eugenie Bouchard as the best potential match-up from the ladies draw for Magic Monday… however, Alize Cornet v Eugenie Bouchard has a pretty good ring to it.  I think if both play well, this could be the best womens match of the day.  Cornet produced a staggering level after dropping the first set to world number one, Serena Williams.  Cornet won, 1-6 6-3 6-4 to progress to the last 16 of Wimbledon for the first time in her career.  Bouchard is also breaking new ground; she defeated Andrea Petkovic, 6-3 6-4 in a match that was much tighter than the scoreline suggested.  Bouchard has maintained her record of reaching the last 16 at every Grand Slam this year.

Cornet beat Bouchard in their only previous match on the clay courts of Strasbourg.  Cornet won that match, an absolute marathon of a semi-final, 7-5 6-7(3) 6-3 that lasted two hours and 56 minutes.  It will be very interesting to see how Cornet responds after the best win of her career.  She has a day at least to let it sink in and focus on this match, a winnable one for sure.  The Frenchwoman has been pushed to three sets in all her matches at this tournament.  It’s a tough one to call; I think in the moment, Bouchard’s calm and collected poise will give her the edge when this gets tight…

The last time that Ekaterina Makarova and Agnieszka Radwanska played each other, it was the Russian player who won in a match that almost completely escaped my memory.  Makarova beat Radwanska, 6-4 6-4 to progress to the quarter-finals of the 2013 US Open.  Radwanska had won their first three matches handily.  Back to this tournament and Aga has sailed through her first three rounds.  In the third round, after going down an early break to Michelle Larcher de Brito, she went a rocking roll, winning the last 11 games of the match to post a 6-2 6-0 victory.  Remarkably, this is Makarova’s first ever appearance in the second week of Wimbledon.  She teetered on the edge in her first round match with Kimiko Date-Krumm, prevailing 7-5 in the decider.  She was pushed harder than the 7-5 6-2 scoreline suggested against Caroline Garcia in the third round, saving six of eight break points she faced.  Makarova has the potential to beat Aga, but at Wimby and on grass, I’d take the number four seed to come through.

After a super consistent start to the year, Li Na has endured a miserable French Open-Wimbledon series.  Li was upset by the in-form Barbora Zahlavova Strycova, who has continued her great grass court form after she reached the final of the Aegon Classic in Birmingham.  She took out Elena Vesnina in the second round and followed that up with arguably, the biggest win of her career.  BZS beat Li, 7-6(5) 7-6(5), saving set points in the second set.  Next up is Caroline Wozniacki, who is looking in fine fettle; the Dane overcame a potentially sticky third rounder against Ana Konjuh.  The first set featured some really good tennis; Woz went toe-to-toe with the bigger hitter, Konjuh and managed to raise her aggression to take a tight first set.  I would have gone Woz over Li, but her performances at the Grand Slams have been historically disappointing in the last few years.  BZS plays a different game that has proven to be lethal on the grass.  Woz leads the H2H by 3-0.  She seems to be in a great place right now and playing really positive tennis.  I’ll take Caro…

In a wide open bottom half, Petra Kvitova‘s grass court loving game is starting to come to the forefront again.  After toughing out a 5-7 7-6(2) 7-5 win over Venus Williams in one of the best womens matches of the tournament so far, Petra is primed for another deep run at Wimby.  In the fourth round, Kvitova will play Peng Shuai.  The Chinese player has enjoyed most of her success on the doubles scene this year.  When fully fit, she remains a highly competent singles player.  Kvitova leads the H2H 4-0 and on grass, *shouldn’t* face any huge issues.

Lucie Safarova is enjoying the best year of her career. Before this year, she hadn’t reached the last 16 of Grand Slam since 2007.  Suddenly, like London buses, she has made two consecutive last 16 showings at the French Open and now Wimbledon.  In both tournaments she secured a big win; at the French Open she continued her dominance over Ana Ivanovic and on Friday at Wimby, she took out Dominika Cibulkova in straight sets.  She will never have a better chance to make a Grand Slam quarter-final; Lucie plays Tereza Smitkova on Monday.  Smitkova beat Coco Vandeweghe in the second round and won a CRAZY third rounder with Bojana Jovanovski, saving match points along the way to win 10-8 in the decider.  As the heavy favourite, this will dump more pressure on Lucie, who is trying to achieve something she has never achieved in her career.  Come on Lucie, you can do this!!!!!!!!

After a major struggle in her second round, Simona Halep put in a richly improved performance to take out Belinda Bencic, 6-4 6-1.  Bencic held a ten deuce opening game that lasted over 12 minutes.  She blew two set points at 40-15, one on a really lazy error, but regrouped with a touch more aggression and focus to win the set and then cruise through the second.  Zarina Diyas has reached the last 16 of a Grand Slam for the first time in her career.  She toughed out a three set win over Vera Zvonareva, screaming with delight at the end of the match.  Diyas is a talented player, one that has flown under the radar.  I’d still back Halep though, who has become very solid at winning matches you would expect her to win.