The womens draw at Eastbourne is always one of the most difficult to predict.  As per usual, the draw is loaded and has delivered some fantastic first round matches.  Agnieszka Radwanska and Petra Kvitova are the top two seeds and are joined by Victoria Azarenka who is making her first appearance on the WTA tour since Indian Wells.  This will be the last year that Eastbourne hosts an ATP draw and it’s not a particularly strong one, which could be subject to further withdrawals.  I’m heading down to Eastbourne on Sunday in time for #Rally4Bally! I’ll be posting my reports and photos on the blog from Wednesday, and will be posting on Twitter for the next couple of days so please give me a follow @MooTennisBlog if you’re interested in coverage from Eastbourne.  So excited!!!

Agnieszka Radwanska headlines a packed Eastbourne draw that features five of the world’s top ten.  Aga has fallen in the first round of Eastbourne in the last two years.  She was the number one seed last year and lost a tight two setter to eventual finalist, Jamie Hampton.  However her performances at Eastbourne haven’t affected her progress at Wimbledon where she reached the final in 2012 and the semi-finals in 2013.  Radwanska opens her tournament against Anastasia Pavlyuchenkova.  Aga leads the head-to-head 4-1, but their last two matches have gone the distance.  Pavlyuchenkova doesn’t appear to be 100% after she picked up a back injury at Roland Garros and she has never performed particularly well on the grass.

The winner of Radwanska / Pavlyuchenkova will likely play Ekaterina Makarova in the second round.  Makarova has had some sensational results at this event, winning in 2010 as a qualifier and only once failing to make the quarter-finals in six appearances.  That loss came against Kvitova in the year that Petra won Wimbledon. Angelique Kerber is the other seed in the top quarter and will open against Alison Riske.  Kerber leads the H2H 2-0, but Riske is a different player on grass.  Kerber’s year has been pretty mixed and her last outing against Eugenie Bouchard at Roland Garros was certainy not one of her finest hours as she lost with barely a whimper, 6-1 6-2.  I have a feeling that Kerber v Riske could be a really fantastic match on grass.  It is the one that has given me the most headaches in trying to pick a winner.  In the end, I’ve gone for Kerber, but I do like Alison’s chances!

The second quarter features the return of Victoria Azarenka.  She will play Camila Giorgi in the first round.  This could be a brutal opener for Azarenka.  The Italian is never fazed playing the top players and loves going for her shots.  We don’t know how Azarenka is going to compete this week, but you’d think she would not turn up here unless she was fully fit after she made that dodgy decision to play in Indian Wells.  Azarenka is in Caroline Wozniacki‘s quarter, which features a tantalising duo of matches.  Wozniacki will play Sam Stosur in the first round, as will Caroline Garcia and Sloane Stephens.  Wozniacki and Stosur are tied at 3-3 in their H2H and neither would class grass as their favourite surface.  Garcia comfortably defeated Stephens earlier this year in Fed Cup action, but an early exit in singles action in Birmingham would suggest Garcia may not be as adept on the grass.  Sloane is impossible to predict so this is another 50/50 match-up.

Fun time with the girls on court today! We all got hit by the ball at least once. #targetpractice lol pic.twitter.com/gE3mIZhII9

The third quarter is the one that is most likely to break up.  Sara Errani and Jelena Jankovic played a pretty painful match at Roland Garros a few weeks ago and if they were to honour their seedings, a quarter-final match on grass between the pair would be frankly terrifying.  Errani opens against a qualifier, but will do well to get out of the first round.  She didn’t win a singles match on grass last year and her serve could take an absolute pounding on this surface if she meets a big hitter.  Jankovic, who also struggles on grass, plays Madison Keys in the first round.  Keys suffered a surprising straight sets loss to Timea Babos in the second round of Birmingham where she dropped her serve on five occasions in a match that lasted less than an hour.  Keys hasn’t made a great deal of progress this year, but playing JJ on grass is winnable.  Defending champion, Elena Vesnina and last year’s Birmingham champion, Daniela Hantuchova are both in this section and in my opinion, could be the ones to sweep up if Jankovic and Errani fail to ignite their games on the grass (LIKELY).

Petra Kvitova bookends the draw and she will play Lucie Safarova for the fourth time in 2014.  Petra holds a dominant lead in the H2H 4-0.  She lost just one set in those four encounters, which came in Doha.  Safarova had a double break lead in the first set of their most recent match in Madrid, but still ended up going down in straight sets.  The winner will play Zhang Shuai or Varvara Lepchenko in the second round; Petra played both players on the clay this year, defeating Lepchenko in three sets in Madrid and losing to Zhang in three sets in Rome.  This draw is impossible to pick out a winner because I think many players will be more focussed on getting one or two matches and then heading to Wimbledon and the Wimbledon party.  I like Petra’s draw, but it’s a fact that she could lose to ANYONE, even on grass. 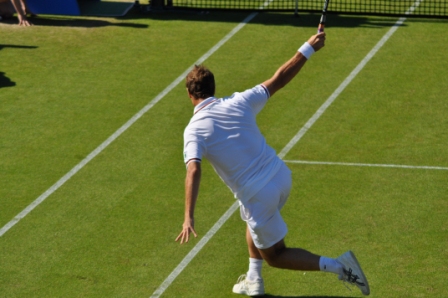 Richard Gasquet returns to Eastbourne for his second appearance in the main draw at the Aegon International  In 2012, he lost his first match to Marinko Matosevic, 6-1 6-7 6-7.  Gasquet has been struggling with a shoulder / back problem and lost his first round match in Halle to Robin Haase, 6-4 6-4.  After a bye in the first round, Gasquet will play either Bernard Tomic or Andrey Golubev.  This draw features a number of clay courters and Federico Delbonis is seeded to meet Gasquet in the quarters.  Three Brits have wildcards this week and James Ward is located in the first quarter.  He takes on Donald Young in the first round and could progress through the draw with some solid performances.

The second quarter features Stan Wawrinka‘s Roland Garros conqueror, Guillermo Garcia-Lopez.  The Spaniard will play either Denis Istomin or Mikhail Kukushkin in the second round.  Another clay courter, Santiago Giraldo has bagged a seeding, but I would back Edouard Roger-Vasselin to make the quarters.  Feliciano Lopez headlines the third quarter; it is questionable whether the defending champion will turn up having reached the final at Queens.  Ivo Karlovic is the other seed in this section and plays the toughest of the first rounders against Jeremy Chardy.  Dan Evans plays a qualifier in the first round and could take advantage if Lopez does pull out as the Spaniard would be a potential second round opponent.

The fourth and final quarter features Alexandr Dolgopolov and Gilles Simon.  Dolgopolov was forced to pull out of his Queens quarter-final with Grigor Dimitrov due to an injury and like many of the players in this draw, remains a question mark.  His first match would be against either Sam Querrey or the third of the British wildcards, Kyle Edmund.  Querrey won two matches at Queens and would be my tip to make the quarters.

One thought on “Aegon International, Eastbourne 2014: Preview and Predictions”