This isn’t shaping up to be a particularly rewarding tournament for some of the ATP next generation as Grigor Dimitrov followed Kei Nishikori on an early plane home with a first round exit.  Dimitrov was beaten by Ivo Karlovic in straight sets.  Dr. Ivo made the final in Dusseldorf so was in good form; however Dimitrov had beaten Karlovic in Rome two weeks ago.  It was a disappointing result for Grigor, who later said in his post-match conference that he had had a rough few days and was dealing with some personal issues.  Aside from the Australian Open this year, he has never performed well at the Slams. 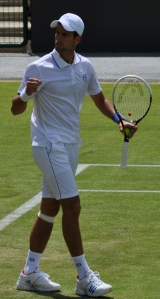 As has become tradition with the early rounds of the mens slams, I am struggling to pick out matches that I am actually interested in.  Therefore, I have gone for the number two seed, Novak Djokovic who faces Jeremy Chardy in the second round of Roland Garros.  Djokovic was a comfortable 6-1 6-2 6-4 winner of Joao Sousa in the first round.  He did stumble at the finishing line, which he has done a fair few times this year.  The match was most memorable for his chat with a ballboy at a rain delay as he swapped his racquet for the kid’s umbrella.

Chardy’s first match of the week was a comfortable straight sets victory over Daniel Gimeno-Traver, 7-5 6-2 6-2.  The Frenchman beat Roger Federer in Rome and is generally regarded as a pretty respectable opponent on his day.  The head-to-head is not a happy one for Chardy; Djokovic has won all eight of their previous matches and it must be one of the most lopsided H2H’s on tour because Chardy has NEVER even won a set.  Their last match earlier this year in Miami was one of the closer matches they have shared with Djokovic prevailing, 6-4 6-3.  Chardy winning a set would be pretty surprising.

On Sunday, Jerzy Janowicz won his first match since FEBRUARY with a four set victory over Victor Estrella Burgos, who was playing for the first time in a Grand Slam at the age of 33.  Janowicz had a match point in the third set tiebreak before double faulting down set point.  He recovered though and secured the win in four sets, 6-1 6-4 6-7(8) 6-4 in two hours and 23 minutes.  Janowicz will meet Jarkko Nieminen in the second round.  Nieminen needed five sets to beat Michal Przysiezny, 6-7(7) 6-4 6-7(3) 6-3 6-4.  Przysiezny was on a similar run of form much like Janowicz.  He has won just one match this year and is currently on a 13 match losing streak.  It was evident from Janowicz’s first round match that he is devoid of confidence right now.  The win over Estrella Burgos should have helped, but Nieminen won’t be an ideal opponent as he tries to find some better form with semi-final points to defend at Wimbledon looming.