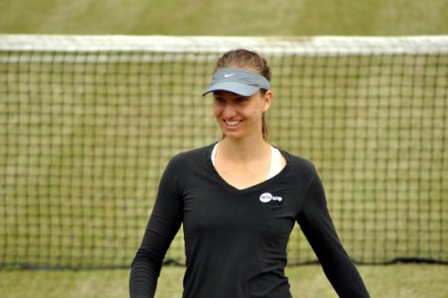 I was looking forward to Tuesday’s night session in Stuttgart, but didn’t quite expect what we got.  The schedule kicked off at 5.30pm and was still going when I gave up for sleep at the end of the second set of this match.  Jelena Jankovic produced a stirring comeback, saving four match points to beat Mona Barthel in 2 hours and 25 minutes of high quality and richly entertaining tennis.  I only saw the second set, but it was without doubt, the best set of tennis I watched all year.  That probably sounds dramatic, but it REALLY WAS! For a set and a half, Mona was playing at her very best.  When she’s playing well, it really is a joy to watch.  Mona led by a set and a break but unsurprisingly, JJ didn’t let off, broke back and broke again to lead 5-4 second set and serve for the set.

The rallies were already a lot of fun, but the next two games were sensational.  I think both were ten minutes plus and it was Mona (!!!) who won both of them to lead 6-5 in the second set.  This set really had everything.  Double faults, amazing volleys, winners galore, JJ arguing with her coach, contentious calls, horrendous errors… everything.  Barthel has been criticised for her lack of effort at times.  In the second set, her attitude was excellent and you could see in her eyes that she was desperate to win this match.  She never gave up the fight and saved a number of set points at 5-4 down in the second set.  On her Facebook page, it has sounded like Mona was at her lowest ebb, tennis-wise, so a win would obviously have meant the world.

In the second set tiebreak, Barthel racked up three match points at 6-3.  The first two she squandered with WILD returns and the third one she placed a volley into the net after another breathtaking rally.  Barthel brought up a fourth match point, but Jankovic showed impressive resistance as Barthel went for glory.  Jankovic took it 10-8, a crushing blow for Mona.  Barthel got tight, but it’s not exactly surprising considering where her level of tennis has been in the last year.

I didn’t stay up for the third set, but I was surprised Mona managed three games.  It sounded like she didn’t give up the fight and made Jelena really earn this win.  Like Lucie in the first night match, I really hope Mona takes the positives from this match because there were many.  Yes, she got tight in the tiebreak, but some of her tennis was majestic.  Barthel has had a woeful last year on the tour and it is so frustrating because in matches like this, you can see her huge talent and potential. It may only be in rare glimpses, but I haven’t given up hope that she’ll turn it around in the future.  Jankovic did extremely well to get the win and it should give her confidence for the clay court season ahead, which has always been one of her best stretches on the calendar.

I thought Safarova v Sharapova was great, but the sections of this match I watched were even better. I’m looking out for the whole highlights, or at least the second set on YouTube.  If I find them, I will post a link to them…