Seven of the top eight seeds have reached the quarter-finals in Monte-Carlo, which should finish with a flurry.  It is safe to say that the last two days have failed to produce any gripping matches.  The four day Easter weekend starts tomorrow and I am very much looking forward to watching some of the action over the next couple of days!  The line-up for Friday is really terrific and here’s hoping that it actually delivers in quality tennis. 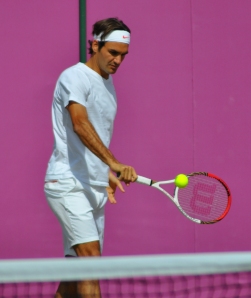 In yesterday’s preview, I spoke of not being able to trust Fabio Fognini.  I should have gone with my heart as the Italian player threw in another gutless display, losing 7-5 3-6 0-6 to Jo-Wilfried Tsonga.  Fognini’s attitude is really pathetic and although I never normally agree with a crowd booing, it seems that in this case, they were right to jeer the Italian.  Tsonga has had a solid week with two three set wins and pairs up with Roger Federer in an intriguing quarter-final.  Federer defeated Lukas Rosol, 6-4 6-1 in 57 minutes.  Much like their last display in Dubai, Rosol broke Federer early, but was unable to consolidate his lead.

This year, Tsonga has gone walkabouts in the matches against the higher ranked players and in the latter stages of tournaments.  He has endured a miserable string of straight set losses to Federer (Australian Open, R4), Marin Cilic (Rotterdam, R2) Ernests Gulbis (Marseille, F), Tomas Berdych (Dubai, QF) and Andy Murray (Miami, R4).  Tsonga did beat Federer in their last clay court match, a resounding straight sets win in front of his home crowd at Roland Garros last year, 7-5 6-3 6-3.  Federer though completely turned the tables in Melbourne with an imperious performance, prevailing, 6-3 7-5 6-4.  Tsonga has shown an improvement this week ,but it’s not enough in my opinion to warrant him having much of a say in this quarter-final.

The quarter that looked most likely to open up with some upsets has stayed true with the seedings as Stanislas Wawrinka and Milos Raonic will meet on Friday in the first quarter-final on Court Central.  Wawrinka didn’t have to take to the court on Thursday as Nicolas Alamgro withdrew from their third round match.  Raonic enjoyed a really impressive victory over competent clay-courter, Tommy Robredo, 6-4 6-3.  Wawrinka has won both previous matches against Raonic with the most recent encounter taking place in Shanghai.  On that occasion, Wawrinka beat Raonic, 7-6(2) 6-4.  Both have played really well this week; Wawrinka was in fine form against Cilic and Raonic continues to build on a very solid set of results since Indian Wells.  If Stan wins, it could set up an Australian Open rematch with Rafael Nadal, which would be tantalising.