Novak Djokovic edged out Andy Murray, 7-5 6-3 in the first of the mens quarter-finals.  I’ve had issues with Djokovic-Murray matches before, but this was actually very good! Despite the amazingness of the Wimbledon final, I thought the tennis was pretty shocking.  However when they go for their shots and mix it up, it’s fun to watch.  Murray was really positive in his play and it was one of his best performances of the year.  Of course, the talking point was the incident where the umpire failed to see Djokovic hit a shot where his racquet was clearly over the net.  Murray was mad, understandably, but the situation wasn’t helped with a replay being shown in the stadium. The decision did end up having a big impact on the match.

The dazzling form of Alexandr Dolgopolov continues to turn heads in 2014.  In Indian Wells, Dolgopolov beat the world number one, Rafael Nadal and on Tuesday, he took out the Australian Open champion, Stanislas Wawrinka in three sets.  The Ukranian player, who has been on a sensational run of form for the last month, will take on Tomas Berdych in the quarter-finals.  After a shocking early exit in Indian Wells, Berdych has quietly made his way through the draw without any dramas.  He beat John Isner in the fourth round without needing a tiebreak in either set of his 6-3 7-5 victory.  Berdych has won all three previous matches against Dolgopolov.  Dolgo has a shot in this one; it is worth nothing though that apart from that one blip in the desert, Berdych has been supremely solid in 2014. 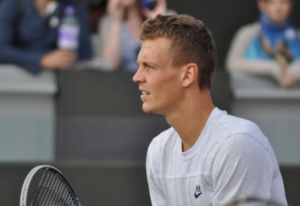