Like Indian Wells, Miami offers up all eight of the fourth round matches on the same day.  To be honest, I am unenthralled by the line-up and perhaps that is just me feeling a downer on Miami.  However if the matches go the way I think they could (they won’t) then the quarter-final line-up could be pretty special.  Some of the 4th round matches are yet to be decided so the focus remains on matches that are actually confirmed! 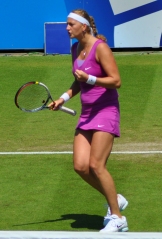 Two straight set wins and a fourth round showing has marked a very successful week for Petra Kvitova in Miami.  Kvitova always struggles in Miami with the heat and humidity because of her asthma, and she made the point in her interview on the WTA Live broadcast.  Kvitova enjoyed a no-nonsense victory over Donna Vekic in the third round, serving out the match to LOVE to win 6-3 6-4.  Her opponent in the fourth round will be Ana Ivanovic.  Since beating Serena Williams in Melbourne, Ivanovic has been rather lukewarm with early losses in Doha, Dubai and Indian Wells.  She secured her best win since Australia with a 6-4 6-3 victory in the third round of Miami over a tiring Flavia Pennetta.  Ivanovic looked on edge early calling her coach onto the court after just three games.  However she slowly settled and was rewarded throughout the match with her superior aggression.

Ivanovic leads the head-to-head by 4 wins to 2; however Kvitova has won their last two matches on the WTA tour with straight set wins at the Australian Open (2012) and Dubai (2013).  As mentioned above, Kvitova is never going to play her best in these conditions.  Ivanovic showed enough in her third round match to suggest she can win this one.  It will all come down to whether she can hold it all together.

Angelique Kerber and Ekaterina Makarova will play each other for the eighth time on the WTA tour in the last 16 of Miami.  After a shocking early exit to Maria-Teresa Torro-Flor in Indian Wells, Kerber has steadied the ship and secured two big wins in Miami.  Firstly, she came from 2-5 down in the third set of her first round match to beat Peng Shuai, 6-3 1-6 7-6(5) and improve her W-L record to 2-5 in three set matches in 2014.  Secondly, Kerber exacted revenge on Tsvetana Pironkova, who defeated her earlier this year in the Sydney final, with a crushing 6-0 6-2 victory.  Makarova continues to build a solid slate of results in 2014 as she recorded a second consecutive win over Sara Errani in a tight three setter, 6-3 2-6 6-4.  Before the tournament began, I was convinced Makarova would win this potential match-up.  Makarova leads the head-to-head with Kerber by 4 wins to 3 and has won their last two matches.  However I am more on the fence now after Kerber’s improved performances this week.

Venus Williams d. Dominika Cibulkova in 3 seys *its possible Venus could be knackered for this one*