Reports from the Argentine media came out on Friday suggesting that Juan Martin del Potro is considering having surgery on his left wrist (see article here).  It would be a crushing blow for the big man because it would rule him out for the rest of the year.  As a DelPo fan, I feel genuinely gutted reading the news.  Del Potro was starting to have issues with the wrist in 2013, but the situation has worsened in 2014 where he was forced to pull out of Dubai, Indian Wells and Miami.  In his statement for withdrawing from Miami, he said that he had been training in Miami and was still feeling pain in his wrist… the only thing going through my head was why are you still training?!

If the reports are confirmed, this will be so sad to see because last year Del Potro was starting to play arguably, the most consistent tennis of his career so far.  It does feel like the only proactive solution because this problem seems to have persisted for quite a while and also with the previous experiences with the right wrist, which sidelined him throughout 2010.  Del Potro will reportedly visit Dr Berger where a decision should be made soon after.  Wishing you all the best, DelPo!!! 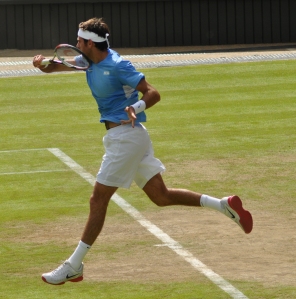