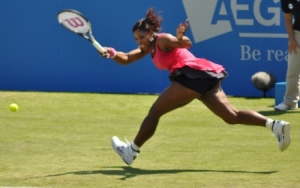 Petra Kvitova started the 2013 season in pretty dire form, but it was Doha where she reminded everyone what she was really capable of.  This quarter-final with Serena Williams was heavily anticipated and one of the few matches that actually exceeded expectations.   I have always felt that Petra is one of the players who could challenge and on her day, out-hit Serena.  This certainly seemed the case in the first set as Kvitova played a spectacularly clean set of tennis, keeping her errors low, controlling the play with her forehand and volleying superbly.  The point at 2:22 in the video below was outstanding.  Playing pretty close to her Wimbledon-2012 best, Kvitova threatened to break the Serena serve for the second time, but Serena clung on for one more game before Kvitova deservedly claimed the first set, 6-3.

Kvitova maintained her high level up to 3-3 in the second set and just as it seemed the upset could be on the cards, Serena started to buckle up and play with more intent.  This match meant a great deal for Serena, even if she didn’t admit it in the pre-match interview beforehand, as a win would send her back to world number one.  Kvitova had done remarkably well to fend off Serena up until now, but the American finally made the breakthrough and quickly wrapped up the second set.

The decider was the scrappiest of the three sets with four breaks of serve and three coming on double faults.  It was still a richly entertaining set, which was intensified with such a close finish that could have gone either way.  Kvitova led 4-1 15-0*, but Serena was a woman on a mission.  Kvitova held admirably at 4-4, but at 5-5, she was outclassed by Serena, who played a tremendous game with some stunning angles to break serve.  She won the last 8 points of the match and looked delighted at the end to claim the world number one spot.  She was incredibly emotional in her post-match interview and it showed how much it really meant to her.  Winning this match, one of the best of 2013, was the perfect match for Serena to seal the deal.

Kvitova played a fine, fine match and proved that she can definitely give Serena a tough match…  More matches between Serena and Kvitova are very welcome in 2014, WTA draw gods!