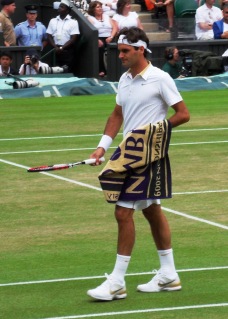 Roger Federer beat David Ferrer, 7-5 6-3 to progress to the final of the ATP World Tour Finals.  I found this a really enjoyable match to watch and there were some great rallies on show.  The first set went on serve for the most part; Federer was not at his best and was making quite a few unforced errors.  He was put under immense pressure at 4-5 as Ferrer came within two points of the first set on a number of occasions.  Unfortunately for Ferrer, he just couldn’t force a set point.  Federer managed to hold at 5-5 and the winner never looked in doubt after this as Federer went onto break Ferrer’s serve and hold to win the first set, 7-5.
Federer broke at the start of the second set and the match had an all too predictable sense to it.  As would be expected with the tenacious Spaniard, Ferrer kept plugging away and produced the shot of the match to hold at 2-1.  Federer had Ferrer on the run with a delicate drop shot, but he showed terrific speed to stay in the point and then finish it off with a sensational backhand down-the-line.  There were some great rallies at the end, but Federer was looking more comfortable from the back of the court and finished with another break to win 7-5 6-3.
Federer was not at his best, but was still too good for Ferrer who has had a great tournament this week.  I would love to see Ferrer win a big tournament next year; what he lacks on talent he makes up for in effort and hard work.  He just lacks the fire power against the big guns and has to rely on them to have an off day.   Federer will now play either Jo-Wilfried Tsonga or Tomas Berdych  in the final.  Berdych won their only previous encounter last month in a three setter in Beijing.  I’m going for Tsonga to win this time in 3 sets… its unlikely I will be able to watch the match so I will be blog my review of the final tomorrow 🙂