15. Andrea Petkovic d. Jelena Jankovic 2-6 6-2 6-4 (Miami)
This was one of a number of excellent matches that littered the draw of Miami this year. Petkovic and Jankovic fought out in the quarter-finals in what was their first ever encounter against each other. The first two sets were good although they were not playing their best tennis at the same time. Jankovic started the better but her level dipped as Petkovic grew in confidence. The match got better and better and came alive in the third set where there were long rallies and constant switches in momentum as Petkovic won the last four games from 4-2 down to cement her win over the world number one Caroline Wozniacki in the previous round. 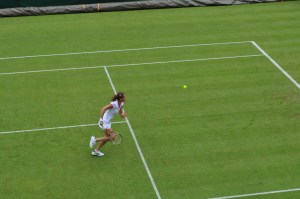 14. Caroline Wozniacki d. Marion Bartoli 6-1 2-6 6-3 (Indian Wells)
Indian Wells was pretty unspectacular this year, but it at least ended on a high note with an entertaining final. Wozniacki had blitzed her way through the tournament and was well on her way to beating Marion Bartoli, who she had destroyed in Doha weeks before. However Bartoli turned the match on its head with some lovely variety in the second set to stun the Dane and force a deciding set. There were some long, gruelling rallies in the final set and the sheer determination from Bartoli made this a good match. Wozniacki managed to pull the win through using her far superior stamina against a tiring Bartoli. The respect between the two players was all too clear to see at the end, which I also liked from this match.

13. Tamira Paszek d. Francesca Schiavone 3-6 6-4 11-9 (Wimbledon)
This was one of a number of epic women’s matches to take place at Wimbledon this year. I had watched Paszek go down in a tight match to Li Na at Eastbourne the week before and was convinced she would do well at Wimbledon. When the draw came out, I predicted her to go to the 4th round… in fact she made it all the way to the quarter-finals! The match was on court 12 so I had to watch the match on a poor quality screen online… it did not however distract from the drama that was to unfold! Schiavone was well below her best in this match but the final set, which lasted 124 minutes was a pulsating encounter with some incredible tension-fuelled rallies. Schiavone had the opportunity to serve out the match at 9-8 but Paszek kept fighting and her groundstrokes did the damage continually getting the Italian on the run. Paszek deserved to come through this encounter and I was especially delighted 🙂

12. Agnieszka Radwanska d. Vera Zvonareva 1-6 6-2 7-5 (Istanbul)
This was the only match from Istanbul that I have put into the top 20 although there were some good matches to watch including the final. This match was pretty dull for 2 sets – in fact I turned off after Zvonareva strolled through the first set as it looked like Radwanska was a goner with her worrying shoulder injury. I happened to check the live scoreboard half an hour later to see that Radwanska had won the second set! I immediately started watching again to witness an astonishing final set. Vera had match points at 5-3, but could not find the winner against the brick wall of Radwanska as she literally screamed her way through a gripping game. Radwanska went on to win the match and keep her hopes of qualifying alive (she would fall in the next match). 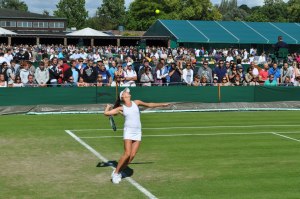 11. Jelena Jankovic d. Francesca Schiavone 6-3 5-7 6-4 (Cincinnati)
Jankovic and Schiavone fought out two entertaining three setters this year, but the one in Cincinnati was by far the most dramatic of the two! I didn’t watch all of the match as I was tucked up in bed, but I felt this match deserved a place in the top 20 from watching the highlights and accounts of the match. Jankovic tried everything she could do to throw this match away! She failed to serve for the match at 6-3 5-4 and then nearly let slip a 5-1 lead in the fianl set. Both players had arguments with the umpire, Eva Asderaki who had her hands full to keep this match under control! The quality of the match wavered, but no-one can deny that matches involving Jankovic are incredibly entertaining on so many different levels!