I was lucky enough to get my first ever set of Wimbledon tickets in the AELTC public ballot for Centre Court on the first Tuesday. I went with my Brother, David and was able to start paying him back for so many years of taking me with HIS tickets! Following a rain affected day on the Monday, there was a packed schedule on all the courts. We got the bus from the train station to Wimbledon and arrived at the grounds at around 11am. I still get a real buzz just before arriving at Wimbledon as you pass all the huge houses on both sides and Centre Court emerges on the horizon!
We made our way into the grounds after a very short wait in the queue and getting searched by security (I obviously looked dangerous :P). We bought a programme (which is actually just about worth the money) and got my camera out ready to snap some players! There was a huge crowd of people surrounding Court 8 where Serena Williams was practising ahead of her first round match. On the court next door to Serena was the World number one, Caroline Wozniacki who had a notably smaller crowd following her.

Caroline Wozniacki on the practice courts
It took us quite a while to navigate our way through the huge crowds as we walked up towards number one court. We also found Andy Roddick and Novak Djokovic practising on some of the outside courts. We tried getting onto the Aorangi practice courts but once again there were large queues everywhere! This is the obvious disadvantage to Wimbledon compared to Eastbourne where you have no problem seeing the players on the practice court.

Andy Roddick practising his serve on Court 19
We studied the order of play beforehand and decided to catch an entire match on the outside courts at 12pm instead of watching Serena Williams first up on Centre Court. We headed over to the roof overlooking Court 18 to watch a first round match between the number 11 seed, Andrea Petkovic and Stephanie Foretz Gacon. Petkovic has had a stellar 2011 season and is one of the most exciting personalities on the tour. I had also yet to add her to my list of players seen live! Petkovic arrived 5 minutes late to the court but started her Wimbledon campaign in impressive fashion. She attacked Foretz from the start and took the early lead; however Foretz broke Petkovic back in the next game with some solid hitting as Petkovic’s 1st serve percentage dipped. Petkovic managed to get the vital break later on in the set with some excellent returning and she eventually wrapped up the first set, 6-3. 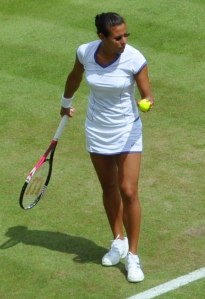 Foretz-Gacon was a lucky loser into the main draw

Petkovic won the first set, 6-3
The second set went with serve until 2-2 when Petkovic broke the Foretz-Gacon serve for a third time. The match felt very even throughout but Foretz was unable to raise her game on the big points. Petkovic struggled to close the match out at 6-3 5-4 and faced several break points on the final game of the match. However each time Foretz threw in a careless error that sailed long or crashed into the net, which demonstrated the difference in class between the two players. 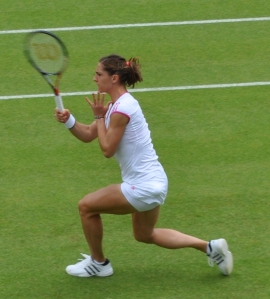 Petkovic was solid yet unspectacular

Petkovic used her serve well with a number of aces throughout the match
Eventually Petkovic finished the match off, 6-3 6-4 and we got a shot off her new victory dance, the hula hoop! The “Petko dance” has become a tradition after a Petkovic win and was another reason why I wanted to see Andrea in action! In truth, I wasn’t that impressed with Petkovic who looked particularly shaky at the end. I was definitely feeling worried about my prediction for her to reach the semi-finals! 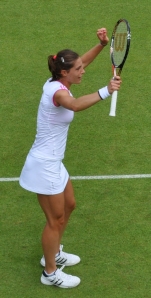 The new Petko dance!
At the end of the match, we headed over towards the South end of the grounds where another of my favourites, Anastasia Pavlyuchenkova was playing her first round match against Leslie Tsurenko. We turned up at the business end of the 2nd set and had a great view of the match over the new court 4 standing under court 3. I have to confess that Pavlyuchenkova was pretty disappointing and made a lot of errors against a very average opponent. Thankfully, she managed to finish the match off in a second set tiebreak.

The new Court 4 next to Court 3

Pavlyuchenkova pulls it through in the end, 6-4 7-6 against Tsurenko
We had another wander around the courts before finally taking up our seats on Centre Court! We made our way up several flights of staircases to the top level of Centre Court and were surprised to see on the tv’s that Serena had lost the second set to Aravane Rezai. We joined the match at the beginning of the third set…
NEXT- SERENA AND FEDERER ON CENTRE COURT!