There was a real sense of anticipation and excitement with the second match of the day between Serena Williams and Tsvetana Pironkova. This was Serena’s first match since winning the Wimbledon title last July following a number of injury and health-related problems. As both players took to the court, Serena received a warm ovation from what was a fully packed centre court. It was refreshing to see the main stadium so full for a women’s match. In fact it was later announced that it was biggest attendance that Eastbourne had ever had for a Tuesday. 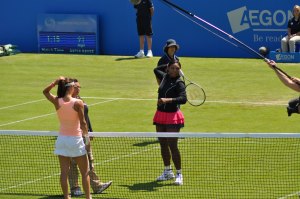 Much excitement surrounded the second match involving Serena Williams
Serena looked particularly nervous and stepped up rather gingerly to begin the match. She struggled from the start as she opened with a double fault and quickly fell 5-0 down within the first twenty minutes of the match. She looked particularly rusty movement-wise although to be honest this was to be expected following her long battle with injury. 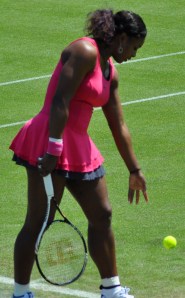 Serena made a nervous start to the match
Her serve lacked any real bite and she made far too many errors to challenge Pironkova in the first set. She began to get frustrated at 4-0; after Pironkova won the first point on our service game, Serena decided to change her racket. For me, it showed a lack of respect to Pironkova as she took what seemed like a year to return to her positon to receive serve. Thankfully, it did not disrupt the rhythm of Pironkova who finished the first set off with a crunching winner. She did well to manoeuver Serena around the court and keep her errors to a minimum, which was all that was needed from her in a strange opening set. 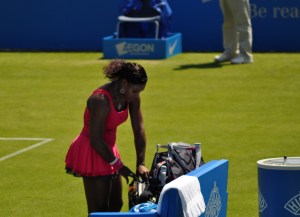 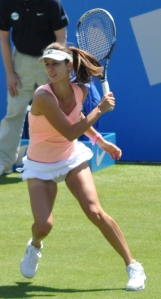 Pironkova played a solid first set
In the second set, Serena started to play much better and made the crucial breakthrough to go 2-0 up as Pironkova committed some criminal errors. Pironkova has been on a terrible run of form since unexpectedly reaching the Wimbledon Semi-finals last year. She has won just just 11 matches since that magical run which highlighted how potentially crucial this match could be to her confidence. Serena raced away with the second set as her heavy yet controlled hitting started to dominate Pironkova. 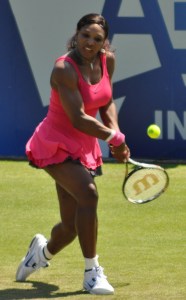 Serena started to put Pironkova under immense pressure with her groundstrokes 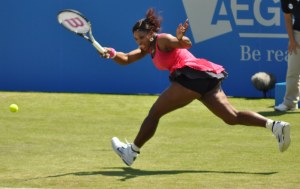 Serena’s movement definitely improved during the match
The third set was a superb battle; there was an early exchange of breaks but you always got the sense that Serena was in control. She made great use of her impressive net skills as she finished a number of points of at the net and even served and volleyed at one stage. Pironkova herself has some nice shots, in particular a deft forehand slice which caused Serena a number of problems in the third set. Following a number of exciting rallies and dramatic points, Serena edged to victory as she served for the match at 5-4. 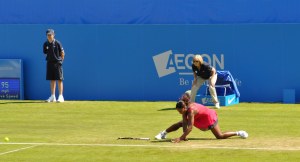 Pironkova gave a good account of herself throughout the third set
The game did not finish without drama as Serena picked up a time violation, which she questioned with Alison Lang. It was a brave thing for Lang to do but she was entirely correct as Serena was taking ages between points. It received a rapturous applause from the crowd who by the end of the match, were not on Serena’s side. She eventually wrapped up the match and put her finger in the air almost to say she is back and watch out! 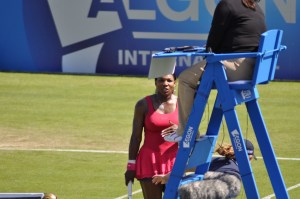 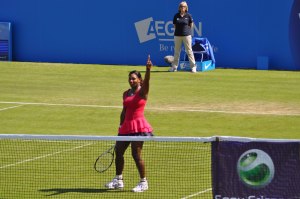 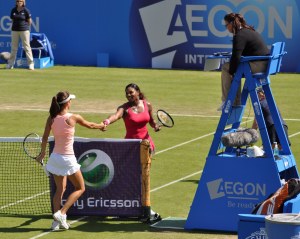 Serena and Tsvetana shake hands at the net
She continued to discuss with Lang about the time violation at the end of the match as the excitement of her first win was rather overshadowed as she took several minutes to acknowledge the crowd. It was particuarly nice to see that the largest applause of the day went to Pironkova – she played her heart out and was unaffected by the anticipation of Serena’s comeback and some disappointing tactics from Serena. It is a wonder why with her talent that she hasn’t produced any noteworthy performances since Wimbledon – perhaps returning to the grass will rejuvunate what has been a poor year so far.
With regards to Serena, I will not be supporting her at Wimbledon. She has certainly injected some new found excitement to the WTA tour but for her to win Wimbledon would be especially bad for the Women’s game. I hope one of the exciting new talents coming through will make a point and prove that there are some good players on the WTA tour despite all the criticism it has been receiving lately. 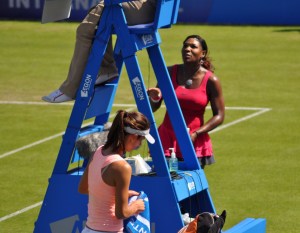