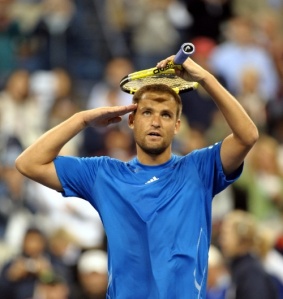 Rafael Nadal continued his impressive form with a straight set victory over Fernando Verdasco, 7-5 6-3 6-4. Nadal made a slow start to the match and was broken for the first time in the championships at 1-1; however Nadal recovered and punished Verdasco for a poor service game at 4-3 and powered his way through the remainder of the match using his extra power on the serve and more solid groundstrokes to defeat Verdasco. It was evident that Nadal just had too much for Verdasco, who never looked as if he was going to win against Nadal as he went into the tie with a 0-10 record. Nadal will now play Mikhail Youzhny in the SF after he defeated Stanislas Wawrinka in 5 sets, 3-6 7-6 3-6 6-3 6-3. Wawrinka led the match by 2 sets to 1 however Youzhny made decisive breaks at the start of the 4th and 5th sets as Wawrinka tired and showed the effects of his previous two matches. An excellent tournament for Wawrinka but disappointment that his fitness couldn’t pull him through to his first ever grand slam SF. Youzhny has taken advantage of a good draw to progress through to the SF’s however not many will fancy his chances against Nadal. This US Open has been relatively disappointing for the Men’s with many of the top players apart from Federer, Nadal and Djokovic failing to perform. A final between Nadal and Federer could however change things and send these championships out with a bang.